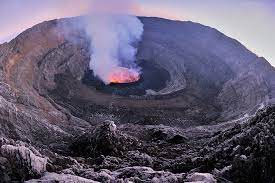 Nyamuragira, also known as Nyamulagira, is an active shield volcano in the Virunga Mountains of the Democratic Republic of the Congo, situated about 25 kilometres (16 mi) north of Lake Kivu. The name is derived from the Bantu verb Kuragira nyamu, meaning to herd animals; nyamu means animal or cows.

It has been described as Africa’s most active volcano and has erupted over 40 times since 1885. As well as eruptions from the summit, there have been numerous eruptions from the flanks of the volcano, creating new smaller volcanoes that have lasted only for a short time (e.g. Murara from late 1976 to 1977). 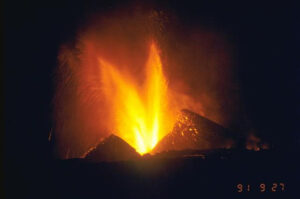 Nyamuragira has a volume of 500 cubic kilometres (120 cu mi), and covers an area of 1,500 square kilometres (580 sq mi). It has a low shield profile and contrasts with adjacent steep-sided Nyiragongo volcano.

Nyamuragira volcano is responsible for a large portion of the sulfur dioxide released into the atmosphere by volcanoes.

At dawn on 2 January 2010 Nyamuragira began spewing out lava flows. There are no settlements close to the volcano, but wildlife officials feared that the eruption may threaten the chimpanzees in the area. Another danger was that the lava could have flowed into the southern sector of Virunga National Park, where there are settlements and villages.

The volcano erupted again on 5 November 2011.

Part of crater of Nyamuragira volcano

In 2014, a new lava lake appeared at the volcano for the first time in 75 years. The previous lava lake at the volcano was emptied in the 1938 lava flow. The formation of the new lake occurred between June and August 2014. It reached a depth of 500 metres (1,600 ft)}. The eruption did not affect the communities in the area but left a lot of ash and air pollution. Sulfate aerosols formed by volcanic sulfur dioxide from the eruptions were observed as far away as over the central Amazon rain forest in South America. By 2018, the lava lake had hardened and the activity appeared to have stopped. Eruptive activity continues during 2021 at the summit caldera.

In 2021, a lava lake appeared at the volcano based on a June