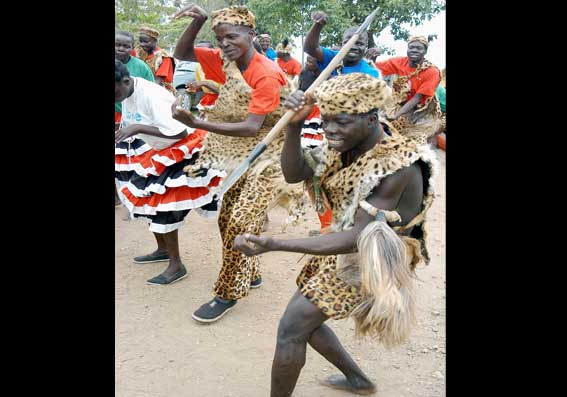 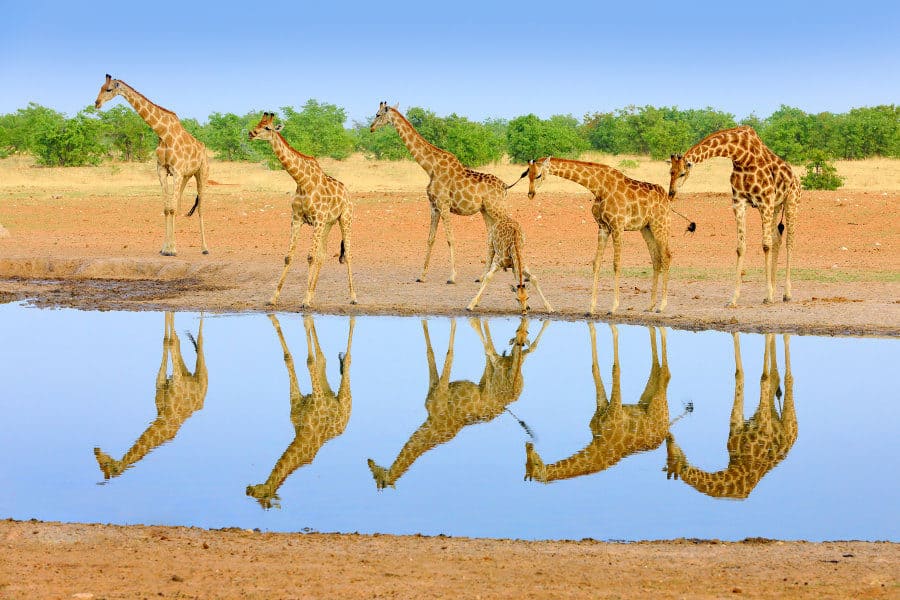 Giraffes, (genus Giraffa), any of four species in the genus Giraffa of long-necked cud-chewing hoofed mammals of Africa, with long legs and a coat pattern of irregular brown patches on a light background.

Giraffes are the tallest of all land animals; males (bulls) may exceed 5.5 metres (18 feet) in height, and the tallest females (cows) are about 4.5 metres.

Using prehensile tongues almost half a metre long, they are able to browse foliage almost six metres from the ground.

Giraffes are a common sight in grasslands and open woodlands in East Africa, where they can be seen in reserves such as Tanzania’s Serengeti National Park and Kenya’s Amboseli National Park.

The tail may be a metre in length and has a long black tuft on the end; there is also a short black mane. Both sexes have a pair of horns, though males possess other bony protuberances on the skull.

The back slopes downward to the hindquarters, a silhouette explained mainly by large muscles that support the neck; these muscles are attached to long spines on the vertebrae of the upper back. There are only seven neck (cervical) vertebrae, but they are elongated.

Thick-walled arteries in the neck have extra valves to counteract gravity when the head is up; when the giraffe lowers its head to the ground, special vessels at the base of the brain control blood

The gait of the giraffe is a pace (both legs on one side move together). In a gallop, it pushes off with the hind legs, and the front legs come down almost together, but no two hooves touch the ground at the same time. The neck flexes so that balance is maintained.

The animals are gregarious, a behavior that apparently allows for increased vigilance against predators. They have excellent eyesight, and when one giraffe stares, for example, at a lion a kilometre away, the others look in that direction too.

Giraffes live up to 26 years in the wild and slightly longer in captivity.

They are prodigious eaters, and a large male consumes about 65 kg (145 pounds) of food per day. The tongue and inside of the mouth are coated with tough tissue as protection.

The giraffe grasps leaves with its prehensile lips or tongue and pulls them into the mouth. If the foliage is not thorny, the giraffe “combs” leaves from the stem by pulling it across the lower canine and incisor teeth.

Giraffes obtain most water from their food, though in the dry season they drink at least every three days. They must spread the forelegs apart in order to reach the ground with the head.

Females first breed at four or five years of age. Gestation is 15 months, and, though most calves are born in dry months in some areas, births can take place in any month of the year.

The single offspring is about 2 metres (6 feet) tall and weighs 100 kg (220 pounds). For a week the mother licks and nuzzles her calf in isolation while they learn each other’s scent.

Thereafter, the calf joins a “nursery group” of similar-aged youngsters, while mothers forage at variable distances. If lions or hyenas attack, a mother sometimes stands over her calf, kicking at the predators with front and back legs.

Cows have food and water requirements that may keep them away from the nursery group for hours at a time, and about half of very young calves are killed by lions and hyenas. Calves sample vegetation at three weeks but suckle for 18–22 months.

Males join other bachelors when one to two years old, whereas daughters are likely to stay near the mother.

Bulls eight years and older travel up to 20 km per day looking for cows in heat (estrus). Younger males spend years in bachelor groups, where they engage in “necking” bouts.

These side-to-side clashes of heads cause mild damage, and bone deposits subsequently form around the horns, eyes, and back of the head; a single lump projects from between the eyes.

Violence sometimes occurs when two older bulls converge on an estrous cow. The advantage of a heavy, knobbed skull is soon apparent. With forelegs braced, bulls swing their necks and club each other with their skulls, aiming for the underbelly.

There have been instances of bulls being knocked off their feet or even rendered unconscious.

In the 13th century, East Africa supplied a trade in hides. During the 19th and 20th centuries, over hunting, habitat destruction, and rinderpest epidemics introduced by European livestock reduced giraffes to less than half their former range.

Today giraffes are numerous in East African countries and also in certain reserves of Southern Africa, where they have enjoyed somewhat of a recovery. The West African subspecies of the northern giraffe is reduced to a small range in Niger.

Giraffes were traditionally classified into one species, Giraffa camelopardalis, and then into several subspecies on the basis of physical features.

Nine subspecies were recognized by coat pattern similarities; however, it was also known that individual coat patterns were unique.

Some scientists contended that these animals could be divided into six or more species, since studies had shown that differences in genetics, reproductive timing, and pelage patterns (which are indicative of reproductive isolation) exist between various groups.

By the 2010s mitochondrial DNA studies had determined that genetic uniqueness’s brought on by the reproductive isolation of one group from another were significant enough to separate giraffes into four distinct species.

The giraffe had long been classified as a species of least concern by the International Union for Conservation of Nature (IUCN), which places all giraffes in the species G. camelopardalis.

A study in 2016, however, determined that habitat loss resulting from expanding agricultural activities, increased mortality brought on by illegal hunting, and the effects of ongoing civil unrest in a handful of African countries had caused giraffe populations to plummet by 36–40 percent between 1985 and 2015, and, as of 2016, the IUCN has reclassified the conservation status of the species as vulnerable.

The only close relative of the giraffe is the rainforest-dwelling okapi, which is the only other member of the family Giraffidae. G. camelopardalis or something very similar lived in Tanzania two million years ago, but Giraffidae branched off from other members of the order Artiodactyla—cattle, antelope, and deer—about 34 million years ago.