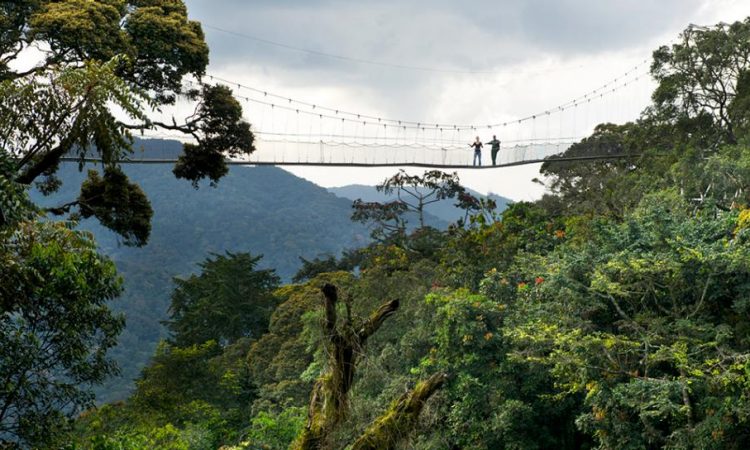 Mount Bigugu trail is the most challenging and difficult hiking trail in Nyungwe forest national park. The trail is covering13.2 kilometers on an elevation between 2950 to 2367 meters, Bigugu trail derived its name from Bigugu Mountain the highest peak in Nyungwe forest national park which is at an altitude of 2950 meters above sea level. Hiking the mountain Bigugu trail is somehow difficult and it takes about 6 hours to complete the hike. This trail offers an excellent bird-watching experience as you spot birds like chestnut owlet, great blue and Ruwenzori Turacos, red collared mountain babbler, white-bellied Robin, and others.

Mount Bigugu trail also offers an exciting walk through a collection of ﬂora in the Nyungwe forest.  If you hike Mountain Bigugu up to the top during the dry season, you may be rewarded with three ﬁery blossoms to light your way to the top the large, red-orange owers of Red-hot Poker, conical, Disa robusta, orange owers of the orchid, and the scarlet owers of the endemic Nyungwe Jewel weed.

Hiking to the top of mount Bigugu, hikes are embraced with the most outstanding 360 degrees overview of the entire park from above. On a clear day, you can get a chance to see the hills and islands of the Democratic Republic of Congo, the shimmer of Lake Kivu beckoning in the distance, and the extension of Nyungwe forest in Kabira National Park in Burundi. You may also see the summits of Volcanoes National Park (if you’re lucky).

Mountain Bigugu in Nyungwe forest national park can be hiked all year round but it is best in the dry months of January, February, June, July, August, September, and December when the trail is less wet and slippery hence making hiking excellent and tourists get a chance to enjoy hiking experience with no interruption from rainfall. During March, April, May, October, and November tourists are not advisable to visit Nyungwe for hiking mountain Bigugu because the trail tends to be wet and slippery which making hiking challenging and difficult.

What to pack for hiking mount Bigugu trail in Nyungwe forest national park.

Hiking mountain Bigugu in Nyungwe forest national park, you have to carry a  rain jacket as it may rain any time, hiking boots, a camera with extra batteries, binocular, long-sleeved clothes, hat, garden gloves, water and energy drinks, and a walking stick is provided at free of charge from the reception center.

Nyungwe Forest national park is a blessed forest with many tourist activities such as its famous chimpanzee trekking this has been complemented with the Canopy walk experience as well as colobus monkey trekking and bird watching.  You can also visit other national parks in Rwanda such as Volcanoes national park for gorilla trekking and get to know more about these primates. 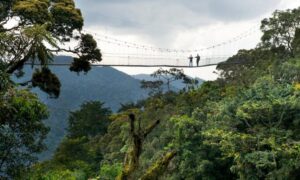 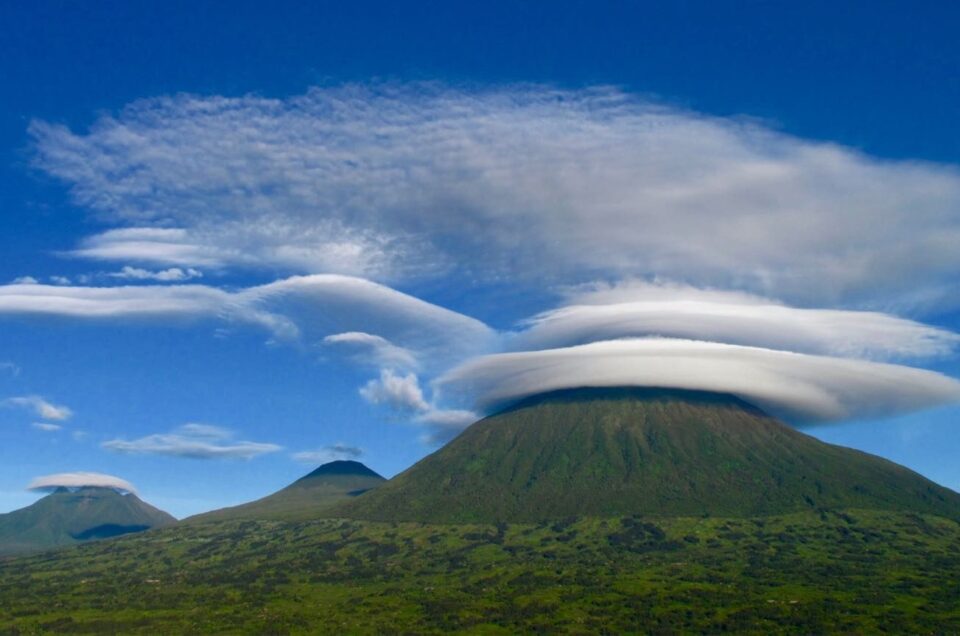 Mount Karisimbi is an inactive volcano that is part of the Virunga Mountains that are shared between Uganda, Rwanda and the Democratic Republic of Congo; and it is the highest of them all. In addition it is the 11th highest on the entire African continent standing at a height 4,507 meters. It is located within Rwanda’s Volcanoes National Park along the border with the neighboring Democratic republic of Congo surrounded by a number of a number of other volcanoes such as Bisoke, Mikeno, and Nyiragongo.

This mountain’s peak is covered by snow in the dry season and it’s from this that its name karisimbi which is a word in the local kinyarwanda language to mean ‘white shell’ was derived. There are two craters found on this mountain with the mutango crater being the largest in addition to the two (2) kilometer wide Branca Caldera

A hike on Mt. Karisimbi is considered as one of the leading tourist activities in Rwanda. a hike on Mount karisimbi is commonly combined with a gorilla trekking Safari in volcanoes National Park. By taking this amazing adventure you will be able to encounter various types of wildlife along the way among which are different types of birds, different monkey species like the golden monkey, and if lucky the mountain gorillas you will also get a chance to see but Dian fossey grave (who was a well-known researcher that dedicated several areas of her life when conducting research on the mountain gorillas in this area. The hike up to the summit is generally considered somewhat challenging and it will require all participants to be in very good physical shape with proper stamina to be able to take on the challenging slopes of the mountain. As you climb up you will be led by a professional park guide and as you ascend or descend you will follow the pace of the slowest hiker with the hiking group. There are also a number of porters available for hire at the park headquarters who will assist in caring your personal luggage, camping equipment and bags and these can be hired at 20 US dollar each.

The hike begins in the early morning and by 7:00 a.m hikers have started the actual climb after a briefing by the park guide. It takes two (2) days to complete the round trip including the ascent and descent with the starting point being at the bottom of Mount Bisoke. During the approximately 7 hour ascent, you will have a stopover at an altitude of about 3,700m which is almost mid-way, and there you will pitch tent for dinner and the overnight.

The rest of the climb will be completed early morning the next day when you are strong enough. An early hot cup of tea / coffee in the morning the following day for breakfast will be well deserving having spent a cold night up on the mountain.  On the second day you will proceed to the final ascent to the peak as you traverse the challenging section that is covered with fog which hinders good visibility, a steeper terrain that experience stronger winds and not to forget the muddy trails. After enjoying some time at the peak you will later begin the approximately 6 hour descent back to the starting point.

Day 1: Hike To The Summit

Today morning you will begin the day early at around 5 a.m. and then transfer to the park headquarters found at Kinigi where you will be briefed about this amazing adventure. After this the hike will begin led by a professional guide and accompanied by two armed ranges one heading at the front while the other at the back. During the hike which may take approximately 7 hours your hiking pace will depend on the physical fitness of the slower hiker on the hiking team. You will traverse the amazing landscapes on the slopes of this mountain during which you will encounter a variety of wildlife including birds, golden monkeys and if lucky you may be able to encounter the Karisimbi mountain gorilla family that lives within the lower slopes of this mountain. Eventually you will arrive at the camping area where you will pitch tent and spend the night. Because it is very cold up on the mountain you are highly advised to bring with you enough warm clothing and bedding.

After an early breakfast today you will enjoy the breathtaking sunrise as well as the views of the great lakes from up the summit. In addition you will enjoy views of the other mountains that make up the Virunga Volcanoes, see the cultivated farmlands below and local settlements in a distance away. The views here are very breathtaking so don’t forget your camera on this adventure. Later you will descend back to the bottom and be received by your Safari guide-driver who will then transfer you to the Kigali International Airport for your departure flight.

What To Pack When Hiking Mount Karisimbi

Below is a list of some of the essentials we consider relevant for any holidaymaker interested in taking on an adventurous hike to the peak of Mount Karisimbi.

Hiking shoes preferably with good support on the ankle

A tent, sleeping bag and warm bedding for the overnight

Mount Karisimbi can be visited all year round however it can best be hiked during the dry season which begins in the month of June to August as well as in December. Visiting during this time of the year will offer you an opportunity to see the snow that covers the peak of the volcano which on the contrary cannot be seen during the wet rainy season.