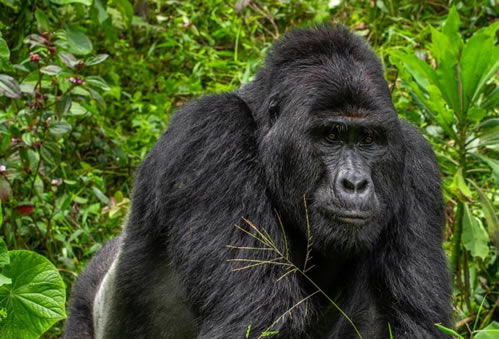 Mountain gorilla is one of the two sub species of the eastern gorilla. On the IUCN Red List, it is listed as an endangered species. The total population is estimated to comprise of 1,004 individuals as of 2018 census. 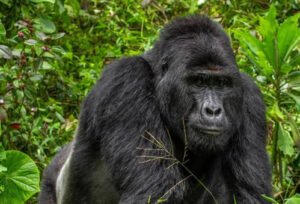 Mountain gorillas are tremendously social and live in groups of 2 to 40 led by the silverback, a dominant male that is the chief leader and protector. The majority of males leave their biological group around 11 years old. Some move alone and others travel with other males for a few years until they attract females to join them.

The silverback leads the group to the best spot for feeding and resting throughout the year. Generally, conflicts are resolved through standoffs and intimidating behaviors meant to frighten intruders away without causing physical harm.

However, almost 10 times stronger than the biggest American football players, a silverback protects its group from attacks by humans, leopards, or other gorillas—even if it means sacrificing his own life.

The female usually gives birth when she turns 10 and has offspring every four or more years. Newborns are weak and weigh only about four pounds.

Their first movements are awkward, like a human infant, but they develop almost twice as fast. Infants nurse and are gradually weaned after they turn three when they are more independent. Mountain gorilla infants have been a principle focus for poachers.

Their diet is made up of more than 10 different species of plants. This great ape favors celery, thistles, wood, and roots. And it rarely needs to drink since it gets most of its water from the plants it consumes.

Uganda
Uganda is a home to over 500 mountain gorillas, which is half of the world’s population, making it an ideal destination. There are 18 habituated gorilla families in Uganda, 17 live in Bwindi impenetrable national park and 1 lives in Mgahinga national park. Some of the gorilla groups include; Mubare, Habinyanja, Rushegura, Oruzogo, Bitukura, Kyaguliro, Nshongi, Mishaya, kahungye, Busingye, Bweza, Nkuringo, of Bwindi and Nyakagezi of Mgahinga.

Gorillas in Bwindi are split into four regions, which are Buhoma in the north, Ruhija in the east Nkuringo and Rushaga in the southern section of Bwindi Forest. The Uganda gorilla permit is relatively cheap, costing $600. 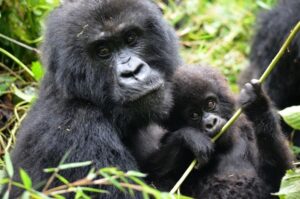 mama and the baby gorilla

Rwanda
Known as the land of a thousand hills, Rwanda is a luxury gorilla trekking destination with the gorilla permit costing $1500. The gorillas live in volcanoes national park and is a home to 10 habituated groups which are all open for trekking.

Democratic Republic of Congo
Virunga national park is a home to 8 gorilla habituated gorilla families. D.R Congo is the least visited destination due to high insecurity threats associated with tourist kidnaps and killing of park rangers.

This represents a rise of 25% since 2010 in its heartland of the Virunga Massif in central Africa. It also marks success for intensive conservation work in a region riven by armed conflict, and where 6 park guards were killed.

Gorilla trekking involves moving through forests for more than 2 hours, hiking some hills and highlands in the parks, depending on the location of the gorillas that day. 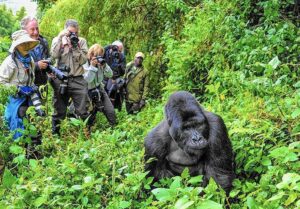 Trekking gorillas during the wet season is possible but a bit challenging. The trails get wet, muddy and slippery, which is tiresome for some trekkers. During the wet season, rain can be expected any time while in the forest, which really does make the experience enjoyable for most trekkers.

Can a person with disabilities trek gorillas?
Mountain gorillas live in mountains at altitudes above 2500 meters and the trek takes from between 3-6 hours. The older, less mobile and physically disabled people have always found gorilla trekking difficult due to the steep hikes and long hours of trekking.

Trekkers with disabilities can either use sedan chairs which is carried by 4 porters or a stretcher. This can be hired at the park headquarters at $300 or more depending on various factors like; time spent in the forest, distance, weight of the client. This way, the person is carried to the hills on the forest and gets a chance to watch the gorillas in their natural habitat.

On the trekking day, trackers go into the forest ahead of the group to look for the gorillas. They will keep in contact with your park ranger guide and direct him/her of where the gorillas are as they follow them. So the chances are so high.

How much does a gorilla weigh?
Gorillas are the world’s largest primates, with males weighing around 143-169kg and standing about 1.4-1.8m tall in the wild. Females tend to be 20-30cm shorter and weigh roughly half what the males do.

The world’s largest gorilla in the wild weighed 267kg when it was shot in Cameroon, but it wasn’t as tall as another silverback gorilla that was shot in Congo in 1938.

In captivity, gorillas have reached even greater weights, sometimes in excess of 310kg.

What do gorillas eat?
Gorillas are mainly herbivores, and their diet mostly consists of bamboo, fruit and leafy plants, though western lowland gorillas also eat small insects. Adult gorillas can eat up to 30kg of food each day.

As roaming herbivores, gorillas play a vital role in seed dispersal. Many large fruit trees depend upon these animals to survive. 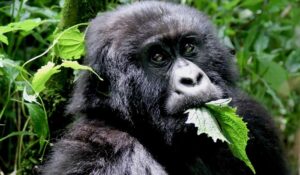 Different types of gorillas . Gorillas are large wild apes living in the group of apes, they are native to the forests of Africa. These apes are relatives to humans by 98% DNA.

It’s the most smallest of all the Gorillas with a difference of shaped head and teeth. The western Gorilla is the most genus Gorilla species. This type of ape can be grayish or brownish with a yellowish forehead.

They are distinguished from the eastern Gorillas by their lighter color and a tip on their nose. The females and males have an average height of 155cm and 135cm, they live in a group of 2 to 20 families including males, females and the young ones.
They feed on fiber diets that include stems, leaves, flowers, fruits etc. The current threat comes from Ebola virus in their population area. Other threats include poaching, habitat loss, and civil war in countries inhabiting the apes.

The western lowland Gorillas inhabit in the lowland swamps in the montane forests of central Africa. This type of gorilla covers the countries of Central Africa, Angola, Republican of Congo, Gabon, Cameroon Equatorial of Guinea and the Democratic Republican of Congo. Although it’s the smallest Gorilla species,

The western lowland Gorilla is the biggest and strongest animal on land. It has a jet black skin with hair covering the entire body and has no tail. The group travels with in a range of 3 to 18 square miles and led by one dominate silverback.