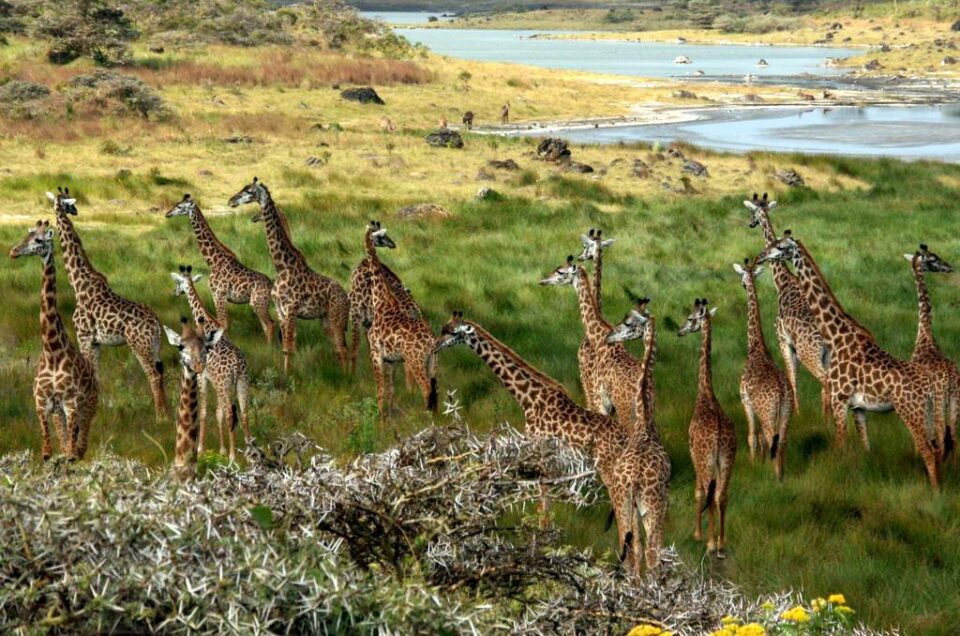 Arusha national park is small sized protected area and a tourist destination lieing on the peak of mount Meru, the park is located in the northern region of Tanzania covering an area of 52.9 square kilometers. Arusha national park’s name is derived from the local Waarusha people who used to live in the area, great ecological system with many attractions which are highlights of the parks and the reasons why the park is a great tourist destination in the Tanzania. The park is dotted with three varied spectacular landscapes that is Meru crater funnels, Kekukumia River, peak of mount Meru on its rim in the west, Ngurdoto crater in the south-east, the shallow alkaline Momelia lakes in the north-east region of the park.

Highlights in Arusha national park include

Arusha national park is a habitant for a diversity of wildlife which habitant in the park, for a note Arusha national park is a home to the largest population of giraffe in the world which successfully thrive in the great vegetation cover including savannah and forest galleries. Other animals in Arusha national park include occasional lions and leopards, water bucks, Cape buffalo, elephants, zebras, buffalo, warthog, bushbuck and primates such as black and white colobus monkeys, blue monkey and many more. The variety of animals in the park make it a great destination for animal viewing safaris.

Mount Meru is a very magnificent attraction creating beautiful magnificent scenery in Arusha national park, mount Meru is the 5th highest mountain in Africa and it is covered with a variety of forests on its slopes and it also consists of a caldera which is encountered upon hiking the mountain. the stunning a symmetric shaped caldera consists of a summit cone with an ash cone in the crater.

Mountain Meru facilities mountain climbing safari in Arusha national park, climbing the mountain is a very exhilarating activity offering a spectacular encounter with the beautiful scenery, flora and animals in the park

Arusha national park is dotted with a series of shallow lakes seven in number and referred to as Momella lakes, these lakes namely Big Momella, Small Momella, Kusare, Lekandiro, Tulusia, Rishateni, and El Kekhotoito. are alkaline lakes each lake with a different shade either blue or green caused by the growth of Algae. Because of the color of the water, the waters in the lake are redeemed not suitable for drinking but these lakes are a great habitant birds and animals crowd the lake to drink water. among these lakes, lake small Momella offers canoeing safaris in the park.

Ngurdoto crater is a great highlight of Arusha national park stretching 3 kilometers in the park, the crater is dotted with a lush swamp and riverine forest in a steep sided bowl. The crater borders Serengeti Ndoga in western side an extensive grassland plain, the crater is a great region for animal viewing as it consists of many visible animal trails from which you get to spot and encounter many animals such as African buffalo, elephant, monkeys, baboons and many more. On the numerous trails you also get to spot many bird species such as hammerkop, herons, spur-winged geese and many more.

Ngurdoto museum is an impressive establishment overlooking the Ngurdoto forest which is a habitant for numerous black and white colobus monkeys, the museum showcases a collection of various animals, birds and other attractions enclosed in Arusha national park.

fig tree arch in Arusha national park is a very much loved feature in the park, the fig tree is a also known as “Ficus Thonningi “. This tree grew from seeds of parasitic tree dropped in to the park by  foraging birds, as this tree was growing it formed huge roots arching to the grounds in a shape of an arch with a space large enough for an elephant sized car to pass through.

Tululusia hill is a very excellent camping and hiking point in Arusha national park and a great viewing point of the park, this hill is a former lookout point during the former tribal wars in the area currently covered by the park. From this point you get to see many animals in the park such as elephants, buffaloes, white and black colobus monkeys and many more.

Cave waterfalls is a magnificent feature situated in a short distance from the slopes of mount Meru, these falls are found inside a large cave shaped feature filled with trees. The cave is open on one side and a t the top which make it a great attraction in the park.

Best time to get to Arusha national park

Arusha national park offers breathtaking safari experience which is best got at different periods of the year, game viewing safari in the park is best got in the dry season period which is in the months of June, July, August, September and October. In the dry season period the vegetation of the park is short giving you a chance to easily view the animals and game viewing trails are relatively short which makes it easy to drive through the park. For bird watching the best time to visit the park for the experience is in the months of November, December, January, February, March and April, in this period migratory bird species from Europe and North Africa are present in the park.

How to get to Arusha national park