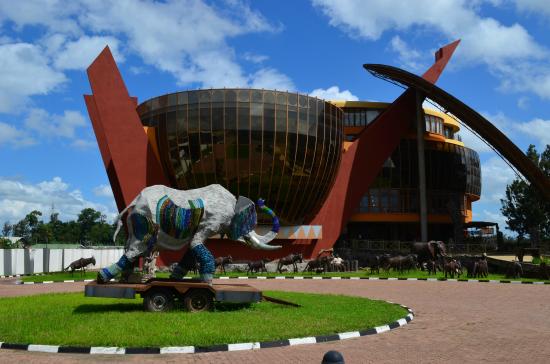 Walking safaris and Market visits are among the tour experience which tourists get as they engage in the Arusha city tour. Other locations around Arusha which are visited during a city tour experience include the following;

The cultural heritage center in Arusha offers a wide variety of art and craft work from the different tribes around Tanzania which are displayed in curio shops, jewelry boutiques, as well as galleries.

For about 20 years now, the cultural heritage center which was started in 1994 as a way of continuing the legacy of the culture of the ancestors.

The Arusha cultural heritage center is located in the outskirts of Arusha and they offer a wide range of items such as precious stones which include rubies, emeralds, tsavorite, diamonds, sapphires, opals, tanzanite, antiques, clothing and textiles, accessories, books as well as spices.

There are also painting and sculptures at the cultural heritage center and other artifacts from different parts of the continent which are collected by experts and emerging African artists who can also purchase these items.

An added bonus to the cultural heritage center is a restaurant which offers fresh food and buffet or a la carte and foods like salads, a variety of homemade curry and mouthwatering traditional African dishes.

The snake park is located about 25 kilometers west of Arusha and is home to a variety of reptiles such as crocodiles, pythons, black and green mambas, Egyptian cobras, puff adders, monitor lizards, tortoises and many others.

There is also a campsite at the snake park which has facilities like hot showers, clean wash rooms and is also a convenient stop during a safari to or from Serengeti national park or the Ngorongoro crater.

Another fun activity during the cultural experience is getting to dress up like a Maasai warrior with the spear, blankets and shield. The bar is also another fun place to visit during a tour around the snake park which has a roof with different items like shirts, bank notes and many other items which all tell a story.

There is also a clinic, workshop and an orphanage at the snake park.

Another location which tourists visit during their city tour of Arusha is the Arusha declaration monument. This landmark is also referred to as “mnara wa amizio la Arusha”.

Attractions which can be seen around Arusha include the following;

Arusha national park is the closest wildlife viewing destination to the town which has spectacular views of Mount Meru and is home to wildlife species such as black and white colobus monkeys, water bucks, giraffes, zebras, buffalo, warthog and dik dik.

This national park which is about 552 square kilometers in size has a diversity of habitats and is made up of a montane forest, Ngurdoto crater, momela lakes and Mount Meru which makes up a big part of Arusha national park’s horizon.