What you need to know about leopards. 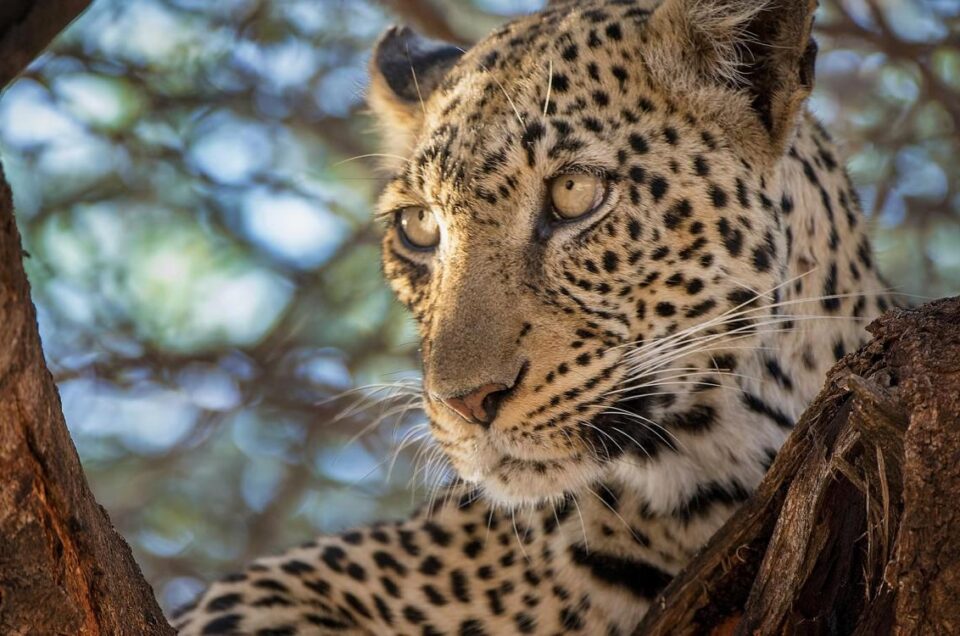 Leopards are large carnivores are powerfully built with long bodies, relatively short legs, and a broad head. There are nine subspecies and are distinguished by the unique characteristics of their coats, which range from tawny or light yellow in warm, dry habitats to reddish-orange in dense forests. Their coat is covered in dark, irregular spots called rosettes. These spots are circular in east African leopards, but square in southern African leopards.

AVERAGE 10 TO 12 YEARS IN THE WILD. UP TO 23 YEARS IN CAPTIVITY.HABITAT

The leopard’s coat does not belong on humans.

These big cats have long been hunted for their soft fur — used to make coats and ceremonial robes — as well as for their claws, whiskers, and tails, which are popular as fetishes.

Leopards can be a nuisance to locals.

When brought into close contact with human settlements, they may prey on livestock. Pastoralists will retaliate and kill the big cats in retribution or will attempt to exterminate them in order to prevent livestock killings.

The primary threat to the leopard is human activity

Habitat fragmentation, reduced prey base, and human-wildlife conflict have greatly reduced this species’ population throughout most of their range.

Although they are widely distributed across Africa and Asia , due to habitat fragmentation and loss, their range has reduced by 31 percent worldwide in the past three generations (about 22 years). The commercialized bush meat trade has caused a collapse of prey populations across large parts of savanna Africa — estimated an average of 59 percent decline in prey populations across 78 protected areas.

Our solutions to conserving the leopard:Work with communities that live near leopards:

These are predator-proof enclosures keep livestock safe from carnivores. By taking proactive steps we are able to prevent both livestock and carnivore deaths.Use Global Positioning System (GPS) collars to study leopards.

AWF believes the key to ensuring the future of the leopard lies in an integrated approach to conservation that looks not only at the species itself but at the needs of local people, land use, and the ecosystem as a whole.

This approach to conservation led AWF to launch Greater Kruger Leopard Conservation Science Project in the Kruger National Park area in South Africa. AWF researchers have placeds GPS collars on individuals to study their populations, evaluate research competition with other carnivores, and study this species interactions with people.

They are strong climbers.

Pound for pound, the leopard is the strongest climber of all the big cats. Their shoulder blades even have special attachment sites for stronger climbing muscles.

They spend much of their time in trees even when stalking prey and for eating. Both lions and hyenas will take away a leopard’s food if they can. To prevent this, they will often store their kill high up in tree branches where it can feed in relative safety.

They are predominantly nocturnal, solitary animals, but each individual has a home range that overlaps with its neighbors. Males have a larger range, and a single male’s range will often overlap with the range of several females. Ranges are marked with urine and claw marks.

Female leopards set down roots when cubs are born.

A female typically gives birth to a litter of two or three cubs. She abandons her nomadic lifestyle until the cubs are large enough to accompany her.

She keeps them hidden for the first eight weeks and moves them from one location to the next until they are old enough to start learning to hunt. They get their first taste of meat in six or seven weeks and stop suckling after about three months. The cubs continue to live with their mothers for about two years.

Their diet fluctuates with prey availability, which ranges from strong-scented carrion, fish, reptiles, and birds to mammals such as rodents, hares, warthogs, antelopes, and baboons.

Where do leopards live?

These big cats tend to favor rocky landscapes with dense bush and riverine forests, but they have also shown to be highly adaptable to many places in both warm and cold climates.

They occur in a wide range of habitats; from deserts and semi-desert regions of southern Africa, to arid regions of North Africa, to savanna grasslands of East and southern Africa, to mountainous environments on Mt. Kenya, to the rain forests of West and Central Africa. They even live in some urban and suburban parts of sub-Saharan Africa.

What you need to know about leopards.
Book Now