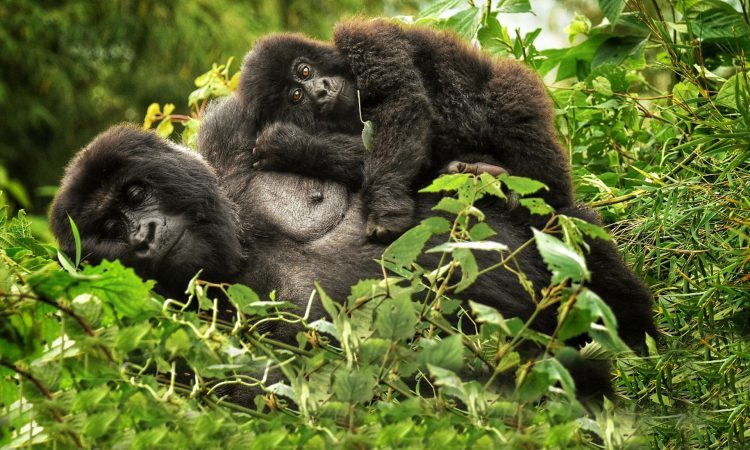 This is the ultimate guide to Volcanoes National Park Rwanda, one of the 3 homes of the endangered mountain gorillas within the Virunga Mountains. It features all you need to know about the park and everything in it including Wildlife, gorilla safaris, vegetation, Volcanoes, Dian Fossey tomb, among others. We also offer travel tips including how to book gorilla permits, what to wear for gorilla trekking, best time to visit Rwanda and accommodation in Rwanda. A gorilla tour to Volcanoes national park is a purely life-changing experience which rewards travellers with a close encounter to our wild cousins, the endangered mountain gorillas with whom we share 98% of our DNA.

Volcanoes national park is a stop centre for all Rwanda gorilla safaris sheltering the highest number of mountain gorillas in the Virunga Conservation area. The strategic location of the VNP roughly 2 hours drive from Kigali international airport make it the most accessible gorilla national park in the world. Besides gorillas, Volcanoes National park is a home for golden monkeys, a variety of birds, reptiles, amphibians, and insects among other creatures which together make a complete Rwanda safari package.

Spanning on a 160 sq km area in the northern part of Rwanda, Volcanoes national park is part of the great Virunga volcano conservation region spanning to cover Virunga National Park Congo and Mgahinga Gorilla National Park Uganda. It was initially a small area around Karisimbi, Mikeno and Visoke volcanoes which was gazetted to protect the Mountain gorillas which were facing the threat of extinction as a result of poaching.

There are about 10 habituated gorilla families in Volcanoes National Park that are visited by tourists everyday.

Each gorilla family is led by a giant silver back which is responsible for overseeing day-to-day activities of the whole group.

In 1967, the American primatologist Dian Fossey who had been doing research on mountain Gorillas in the forests of Congo fled from insecurity and established her research base at a place between Visoke and Karisimbi volcanoes that was yet to be known as Karisoke research center. She spearheaded the conservation campaign of the mountain gorillas and mobilized resources to fight against poaching in this area, a fight she put up until her murder in 1985. She was buried at the research center next to the grave of her favorite gorilla called Digit.

The park continued to suffer at the mercies of poachers though conservation efforts were also underway. In the early 1990s, the park became a battlefield for Rwanda’s civil war which paralyzed tourism activities until 1999. In 2005, in a bid to boost conservation and gorilla tours in Volcanoes national park, Rwanda introduced the annual baby naming ceremony for baby gorillas known as ‘Kwita Iziina’ which has seen great results in as far as gorilla population in volcanoes is concerned.

The tomb of American primatologist Dian Fossey who initiated gorilla protection in the Virunga Mountains lies at Karisoke Research Centre within Volcanoes National Park where travellers visit regularly for a tribute.

Volcanoes National Park is located in a small village called Musanze previously well-known as Ruhengeri, which is very accessible by public transport from Gisenyi or Kigali or from the airport. The drive to Volcanoes national park is 2 hrs and hence one can do gorilla tracking on the same day and drive back to Kigali after the trek. You will be required to arrive at the headquarters of ORTPN in Kinigi, at the park entrance, by 7:00 am, therefore, if you hope to trek gorillas for one day, you have to wake up very early for your journey so that you are on time. However, there isn’t any public transport from Musanze to the headquarters of the park at Kinigi.
Activities in the park include:-
Gorilla trekking, Hiking Karisimbi volcano (3,800 m), One day Mount Bisoke volcano hike, Visiting Dian Fossey, Visiting the twin lakes of Ruhondo and Bulera

The gorilla permit allows you to visit the endangered mountain gorillas in Volcanoes National Park. The Rwanda gorilla permit is sold at $1,500 per person and it guarantees a traveler one hour in the presence of gorillas. Majorly gorilla permits are booked through local tour agents who deposit on them for booking and finally purchase them on behalf of the traveller as the trekking day approaches. Due to the high demand and the strict gorilla conservation regulations in Rwanda, which limit the number of permits to be issued per day, travellers are recommended to make permit bookings at least six months before their trekking date. There are 10 habituated gorilla families in Volcanoes National Park and each family is visited by only 8 trekkers per day. This means that Rwanda issues only 80 gorilla permits per day for gorilla trekking.

Accommodation in and around Volcanoes National Park

What to wear for gorilla trekking?

Besides mountain gorillas, golden monkeys are other exciting attractions that Volcanoes national Park has to offer. Unlike gorilla trekking, tracking golden monkeys in the park is much cheaper and convenient though both activities have the same regulations.

There are 3 Volcanic summits within Volcanoes National Park including Mount Karisimbi, Mount Bisoke and Mount Muhabura. Mount Karisibi is the most popular for volcano hiking given its beautiful snow-caped top and the wonderful views it offers to hikers for the surroundings.

Musanze caves are also located within Volcanoes National Park and were declared a tourist site by the Rwanda Development Board in 2013. Since then, travellers to the park have been visiting the site to see the unique and amazing features of these caves.

where else are mountain gorillas found?

Despite the fact that Rwanda’s gorilla permit is the most expensive in all the 3 mountain gorilla trekking destinations (at $1,500), the country still attracts the highest number of gorilla trekkers in the region. This is due to a number of factors which give Rwanda an advantage over its neighbours as far as gorilla trekking is concerned. These include a good transport network evidenced by the well tarmacked roads right from the airport to the park. The short distance between the airport and the park which takes just 3 hours of driving is another favourable factor. High quality accommodation facilities with good services and for all categories of travellers which include luxury, midrange and budget facilities also give Rwanda another competitive advantage over Uganda and DR Congo. Guaranteed security in and around Volcanoes National Park is another encouraging factor that attracts thousands of travellers to trek gorillas here. Finally, the gorilla trekking exercise in Volcanoes National Park is less tenacious compared to other trekking destinations like Bwindi which is very hilly and with dense vegetation.

The gorilla-naming ceremony which is locally known as Kwita Izina in Kinyarwanda language is an annual event where all the baby gorillas born within the year are given names. The ceremony is inspired by Rwanda’s ancestral baby-naming ceremony that was held after the birth of a newborn. The major aim of naming baby gorillas is to help in monitoring each gorilla in their groups on a daily basis as they roam their habitat. The introduction of the ceremony also aimed at bringing both local and international attention to the importance of protecting the endangered mountain gorillas. Several high profile individuals from across the globe including celebrities like artists and athletes as well both local and international leaders usually attend this gorilla-naming ceremony in Rwanda. The ceremony takes place in September each year in Volcanoes National Park in northwest Rwanda.

Sustainability and Protection of the Gorillas

Rwanda’s Volcanoes national park is the most popular gorilla destination followed by Bwindi forest national park and Mgahinga and Virunga national park is picking up on gorilla tourism. While in the 1980’s, mountain gorillas populations were at the verge of extinction, gorilla trekking is a sensitive activity which when not controlled and managed strictly, may negatively impact on the lives of the mountain gorillas. In a bid to regulate the activity, the governments of Congo, Rwanda and Uganda (the only countries with mountain gorillas) decided to make permits which are more expensive than any other wildlife permit in order to limit the number of visitors and create sustainability of the activity.
The gorilla permit costs $400 in Congo (DRC), $1500 in Rwanda and $600 in Uganda. These gorilla permits help in limiting the number of people trekking the gorillas in order to limit stress on these apes and on their habitat, that may result in their change of behavior or even death. There is only a maximum of 8 permits per gorilla group sold each day to make sure the gorillas are not overwhelmed by the human presence.
In order to conserve mountain gorillas in Africa, respective governments and wildlife organizations came up with a set of guidelines trekkers have to follow in order to remain harmonious with the gorillas

Giving back to the community

Revenue collected from tourists to this park 20% of it goes to the local communities surrounding the park and the rest to the maintenance of the infrastructure in and around the national park.
Find Information on gorilla permits in Rwanda , how to book a gorilla trekking permit to volcanoes, guidelines on a Rwanda gorilla safaris, dressing code for gorilla tracking trip right here on our website.