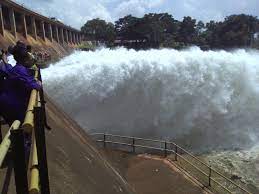 About the Owen Falls

The original Owen Falls Power Station consisted of a concrete gravity dam with a close coupled intake powerhouse unit. It controls the Lake Victoria outflows through a series of ten turbines and six sluices in the dam. When fully opened, the six sluices provide a spill capacity of about 1,200 cubic metres per second (cumecs).

According to agreements between the Colonial British government and the government of Egypt, signed in 1929 and amended in 1949, the power station is operated through the Agreed Curve, so that the outflow from Lake Victoria remains the same as it was before the construction of the dam; when the outflow from the lake was naturally controlled by the rocky barrier of mukkibi falls.Due to neglect and lack of maintenance from 1971 until 1986, generation capacity at Owen Falls Dam deteriorated to 60 megawatts by 1986. This required repairs and rehabilitation, including the increase of each turbine’s capacity from 15 megawatts to 18 megawatts, to meet demand. The power station’s generation capacity reached 180 megawatts in 1996.

The feasibility of increasing the power generating capacity of the Nile River at this location, was studied at the end of the 1980s by Acres International, which today is part of Hatch Ltd of Canada. The new project is a second powerhouse located about 1 kilometre (1 mi) northeast of the Nalubaale Power Station. A new canal was cut to bring water from Lake Victoria to the new powerhouse. Major construction was completed in 1999. The first power from two units out of the installed five units, came online in 2000. The fifth and final turbine was installed in 2007. Each turbine has a capacity of 40 megawatts. The new power station is called Kiira Hydroelectric Power Station.