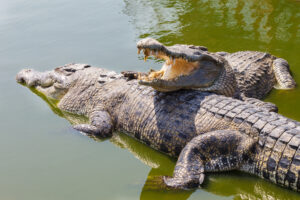 When a large male Nile crocodile spots a female that catches his eye, he bellows and splashes, slapping his snout on the water to get her attention. He grunts and growls, and sometimes, inhales as hard as he can, submerging his snout and blowing water through his nostrils, producing a fountain like spray.

The female crocodile is ready to lay her eggs nearly two months after mating. She scouts the area for a suitable nest site in which to lay the eggs, usually digging a hole on a riverbank, shoreline, or dry streambed.

She deposits from 25 to 80 eggs in the nest, then settles in for a long vigil. For a reptile, it’s an unusual display of devotion. Other reptiles lay their eggs, then move on. The female crocodile, however, will keep constant guard over the nest during the three-month incubation period, leaving only to cool off in a nearby shady spot or for a quick dip in the water. The male is usually close by to help scare off predators.

Just before hatching, the young crocodiles send out high-pitched sounds—a signal for help. The female digs up the nest. The mother crocodiles then carefully picks up the 12-inch-long (30.5-centimetre-long) hatchlings in her mouth and carries them to the water. The young crocs live under their mother’s protection for up to two years, feeding on insects and small fish and growing about a foot (about 30 centimeters) each year.

crocodile, (order Crocodylia, or Crocodilia), any of 23 species of generally large, ponderous, amphibious animals of lizard-like appearance and carnivorous habit belonging to the reptile order Crocodylia. Crocodiles have powerful jaws with many conical teeth and short legs with clawed webbed toes. They share a unique body form that allows the eyes, ears, and nostrils to be above the water surface while most of the animal is hidden below. The tail is long and massive, and the skin is thick and plated.

Crocodiles are a living link with the dinosaur-like reptiles of prehistoric times and are the nearest living relatives of the birds. A large variety of crocodilian fossils have been discovered that date back 200 million years to the Late Triassic Epoch. Fossil evidence also suggests that three major radiations occurred. Only one of the four suborders of crocodiles has survived to modern times. The order Crocodylia includes the “true crocodiles,” alligators, caimans, and gavials. 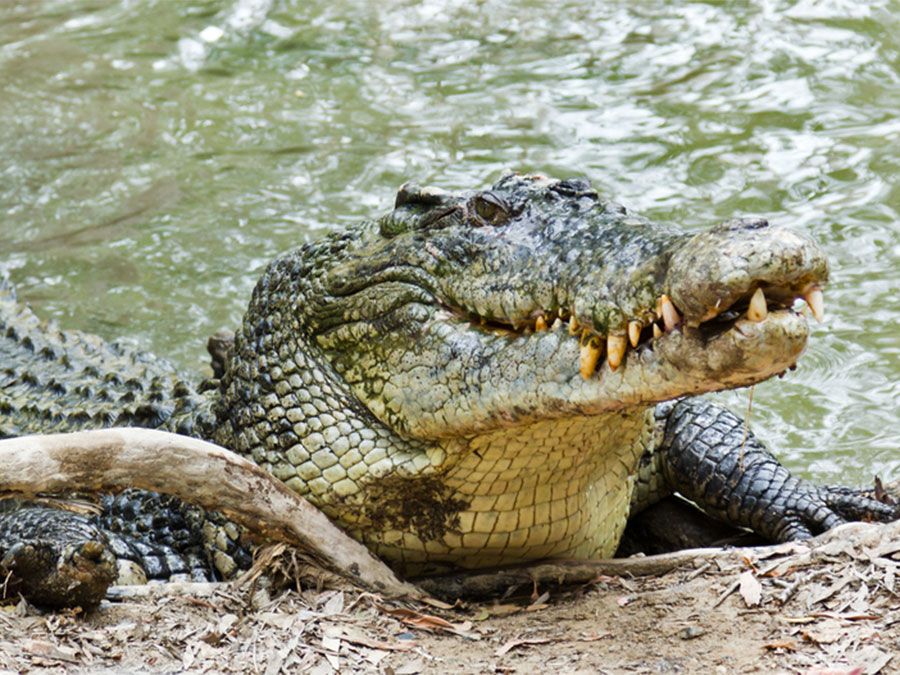 Can You Tell An Alligator From A Crocodile? Quiz
Alligators and crocodiles share a number of features, including long snouts, powerful tails, short legs, and bony-plated backs. But can you tell these two large reptiles apart? Find out with this quiz.

Size range and diversity of structure

Crocodiles are the largest and the heaviest of present-day reptiles. The largest representatives, the Nile crocodile (Crocodylus niloticus) of Africa and the estuarine (or saltwater) crocodile (C. porosus) of Australia, attain lengths of up to 6 metres (20 feet) and weigh over 1,000 kg (about 2,200 pounds). Some fossil forms (such as Deinosuchus and Sarcosuchus) may have been between 10 and 12 metres (33 and 40 feet) long. In comparison, the smallest species, the smooth-fronted caiman (Paleosuchus) and the dwarf crocodile (Osteolaemus tetraspis), reach about 1.7 metres (about 6 feet) in length as adults