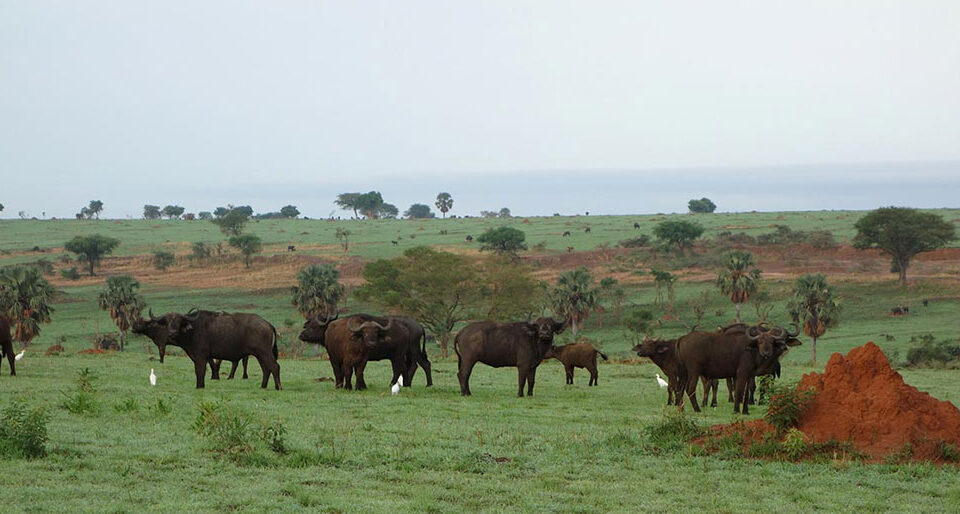 Touched by its splendor in its variety of form of colors form the topography, vegetation and the profusion of brilliant roaming wildlife, Lake Mburo National Park is one of the destinations that have ranked Uganda “The Pearl of Africa”. In this lush landscape, you have experiences like no other with the hippo-filled rivers, abundant birdlife, serene lakes and villages filled with enthusiastic as they consistently capture your attention with their endless smiles.

With the tranquil lakes, rolling hills and abundant wildlife, Lake Mburo National Park is a gem in the wilderness. The park is also conveniently close to Kampala making it perfect for that weekend getaway taking you about  4 hours to get there. Lake Mburo National Park is  the only place where you can spot the impalas in Uganda, antelopes, Elands alongside herds of buffaloes and Zebras.

At 370 square km in size making it the smallest of Uganda’s Savannah national parks, it is an incredible little park and the perfect place for a short wildlife Safari offering a “Taste of the African Wilderness” in Uganda. Lake Mburo Park is  used by most travelers as stopover to break the long journey from Western Ugandan Parks such as Queen Elizabeth national Park.

Lake Mburo National Park is where the Tanzanian Savannah meets Uganda in a most scenic fashion with a scenery of rolling hills, lakes, swamps, lakes that are nearby the wetlands. The park is covered in a dense acacia woodland with a varied mosaic of habitats and landscapes: forests, rich acacia tree valleys, grasslands and seasonal and permanent swamps alongside its amazing fauna rendering no wildlife reserve like it in the country.

The park is a whisper of the African Wild, peaceful and tranquil covered by lakes and a wetland system that extends beyond the National Park with 13 lakes. It’s great beauty is valued in the lakes, extended wetlands, the savanna grasslands dotted with acacia trees, rocky ridges and forested ravines alive with a variety, interest and color. The extensive variety of the vegetation and sculptured landscape in the park harbors surprising diversity of mammals like zebras, impalas, warthog, oribi, buffaloes and birds including bill stocks found nowhere else in Uganda’s National Parks.

This park lies with in a rain shadow that is between Lake Victoria and the great Rwenzori Mountains and this gives a very good stop to the attractions of the south west as Lake Bunyonyi and Queen Elizabeth National park.

Lake Mburo National Park is adorned with a diversity of animals and plant species that can only be seen on a boat cruise on Lake Mburo. The natural setting of the park including a mosaic habitat, the rocky outcrops, dry hillside, the open wooded savannah forest, the bush thickets, lakes as well as the swamps are habitat to variety of animals and birds.

The park harbors over 68 mammal species including; impalas, zebras, buffaloes, hyenas, topis, road antelopes, jackals, elands, Hippopotamuses and the crocodiles.There is also an observation point which is located in a wooden hide out that offers a good chance to view the 4 different species of animals as they lick the salty soil without the animal conscience. The lake has also got 6 fish species that include; Tilapia, lungfish, mud fish as well as the Haplochromis.

Even as one of the smallest parks in Uganda, Lake Mburo National Park offers the best experience on a safari with various wildlife and birdlife to keep the traveler hooked and entertained exclusively.

Lake Mburo National Park is one of the smallest parks in Uganda but it offers one of the best and memorable experiences while on a safari with various activities to engage the traveler to keep the entertained and relaxed.

Wildlife Game Drives: Game drives through the Park allow you to see many animals and birds, with the help of your guide you will be able to spot various species of birds and mammals like the Eland, Impala Antelopes, Giraffes. Burchell Zebras and on a luck day the reward of viewing leopards and lions.

Nocturnal Game Drives: Night Game Drives in this Park are one of the memorable activities you can conduct where you will spot the creatures of the night such as leopards, even lions on the prowl in the park. On this 21/2 hours, you will be able to spot Bush Babies, Porcupines alongside various animals and this one of the highlights of a safari to Lake Mburo National Park.

Boat Safaris: Game drives in touch with the flora and fauna of the lake and enjoy views of different animals and birds along the banks like hippos, crocodiles, buffaloes, antelopes, zebras, also 3 kinds of otters are found in the lake itself.

Birding: This is one of the best places for birding in Uganda with over 350 species of birds that are found here.

Birding enthusiasts will find he swampy valleys of Warukiri and Miriti, and the roadsides between Rwonyo camp and the jetty to be excellent areas for birding and spot the rare shoebill Stork.

Nature Walks: Nature walks in this park can be taken anywhere within the park with an armed Uganda Wildlife Authority Guide at your side making it the only park which provides this adventure. On an early morning guided walk you will encounter hyenas returning to their dens from a night of prowl – at the same time you can often see hippos returning from grazing during the night and returning to Lake Mburo to keep cool during the day.

Conduct the walk to the trail to the top of the hills and see lake mburo and beyond alongside an amazing vantage point for a great view of 9 of the regional lakes found in the area.

Salt Lick: Conduct a guided walk with an armed ranger to the salt lick and observe animals licking the salty soil found there, this is a great opportunity to observe, antelopes, zebras and many more. This is an early morning nature walk lasts about 1 1/2 hours in length  and simply just a fun stroll in the park

Fishing: With over 12 lakes in the area and 5 lakes within the park, Lake Mburo is the largest of them as is more frequented by fishermen for fishing and visitors can do some fishing as well.
The designated fishing spot is at Mazinga, which is a safe area along Lake Mburo where you do not have to worry about crocodiles and hippos.

Horseback Riding Safaris: Lake Mburo National Park is the only park in Uganda where you  conduct  a game drive on  horseback and nothing beats the experience of viewing the wildlife in close vicinity. Mihingo Lodge has a stable and trained staff that take you out on a horseback riding safari of Lake Mburo.

Bicycling Safaris: Travelers can explore and discover Lake Mburo and even the surrounding area on bicycle guided rides where you will ride among the antelopes, zebras, buffaloes in the flat areas of the park and what better great way to get out of the safari vehicle into Nature.

Igongo Cultural Centre: Igongo Cultural Center is a historical showplace for the Banyakitara, who inhabit the Western Uganda and include Banyankole, Bakiga, Batooro and Banyoro.The cultural center has several traditional grass huts on display and guides will explain to you the way life used to be and in some cases still is.
This centre is a great stop over for an enroute lunch as you head west to southwestern Uganda.

Visiting  the Equator: Equator that runs through Uganda.  Travelers love to take pictures underneath the Equator alongside Curio and Souvenir Shops that you can visit to purchase souvenir items to take back home.You can stopover at the Equator on your way to the southwest or on your return from the south west.

This park has few accommodation options compared to the other parks ranging from  up market to semi luxury lodge to mid-range lodge to the low budget lodges to ensure that every traveler is cartered for. Some of the options include;

How To Get There?

Lake Mburo National Park is mostly used  as stopover to access the many parks in the western part of Uganda. The park is over 228 km from Kampala lasting from over 3 to 4 hours to get there with Entebbe international Airport as the main entry point into Uganda.

There are two roads from which you can access Lake Mburo National park, branching off from Masaka – Mbarara road that is the Sanga gate 37 km east of Mbarara, and  via the Nshara gate which is 20km from Lyantonde and 50 km to Mbarara.

Lake Mburo National Park can be visited at anytime of the year and is at the beginning of the rainy seasons in March and October when the grass never grows very long making the park look beautiful. park. The rainy season does not mean it rains all the time, there might be a downpour, but then the sun will come out again and the air will be fresh and cool again.

July and August ,January and February are the hottest with an average recorded temperature of 26° C with variations ranging from 14° C at night to 32° C on a very hot day.

The Park lies in the rain shadow between Lake Victoria and the Rwenzori Mountains receiving an average of 800 mm of rain a year. The rains are unpredictable, but most rain tends to fall in April and November with the long rains occurring from March to June, and the short rains from September to December