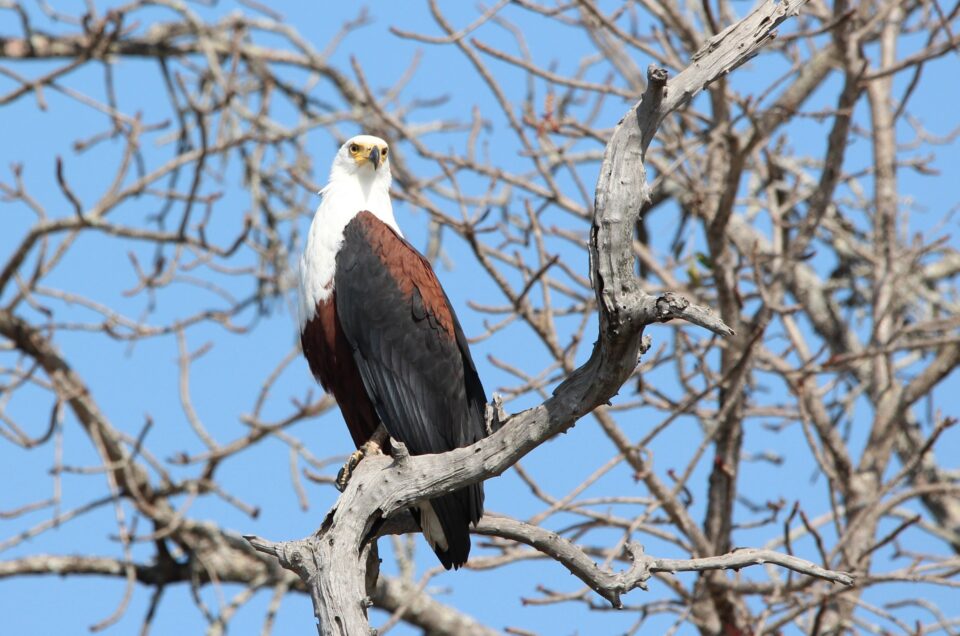 The African fish eagle is a species placed in the genus Haliaeetus. this eagle consists of a white-headed species (the African fish eagle) and a tan-headed one (Madagascar fish eagle). These are an ancient lineage of sea eagles, and as such, have dark talons, beaks, and eyes. Both species have at least partially white tails even as juveniles.

The adult is very distinctive in appearance with a mostly brown body with a white head like the bald eagle and large, powerful, black wings.

The head, breast, and tail of African fish eagles are snow white, with the exception of the featherless face, which is yellow.

The eyes are dark brown in colour. The hook-shaped beak, ideal for a carnivorous lifestyle, is yellow with a black tip.

The plumage of the juvenile is brown in colour, and the eyes are paler compared to the adult. The feet have rough soles and are equipped with powerful talons to enable the eagle to grasp slippery aquatic prey.

While this species mainly subsists on fish, it is opportunistic and may take a wider variety of prey such as waterbirds.

This species is common near freshwater lakes, reservoirs and rivers,

African fish eagles breed during the dry season, when water levels are low. They are believed to mate for life.

Pairs often maintain two or more nests, which they frequently reuse. Because nests are reused and built upon over the years, they can grow quite large, some reaching 2 m (6.0 ft) across and 1.2 m (3.9 ft) deep.

The nests are placed in a large tree and are built mostly of sticks and other pieces of wood.

The female lays one to three eggs, which are primarily white with a few reddish speckles. Incubation is mostly done by the female, but the male incubates when the female leaves to hunt.

Incubation lasts for 42 to 45 days before the chicks hatch. Siblicide does not normally occur in this taxon, and the parents often successfully rear two or three chicks.

Chicks fledge around 70 to 75 days old. Post fledgling dependence lasts up to three months, where after the juveniles become nomadic, and may congregate in groups away from territorial adults. Those that survive their first year have a life expectancy of some 12 to 24 years.

The African fish eagle feeds mainly on fish, which it swoops down upon from a perch in a tree, snatching the prey from the water with its large, clawed talons.

The eagle then flies back to its perch to eat its catch.

During your Uganda safari, African fish eagles can easily be spotted.