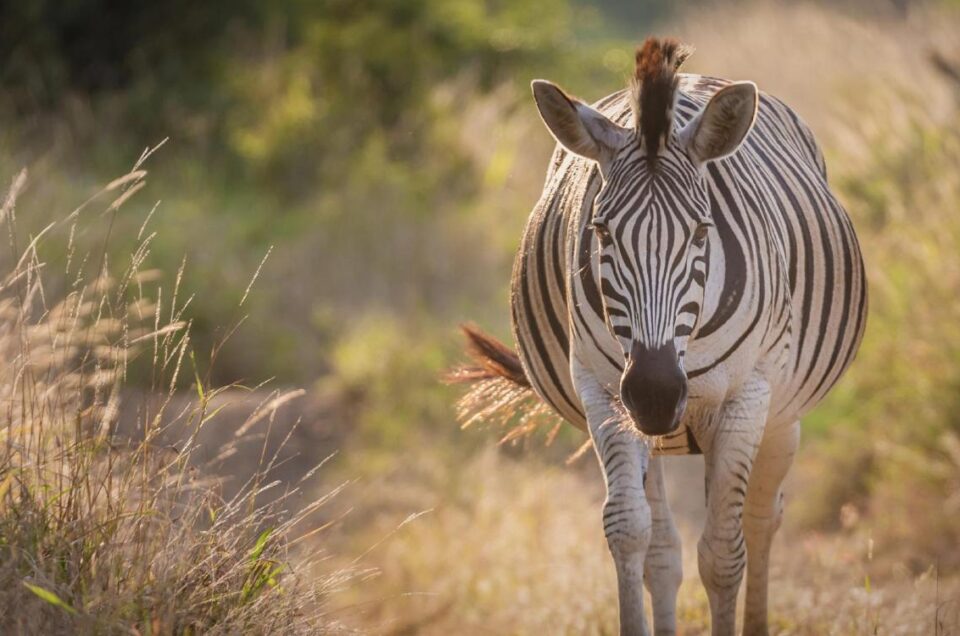 What is a plains zebra?

The most common and widespread of its species, the plains zebra even appears on the coat of arms of Botswana. Larger than the mountain zebra, and smaller than the Gravy’s, this ungulate is horse-like but has a mane of short, erect hair, a tail with a tuft at the tip, and bears recognizable vertical stripes.

Habitat loss due to human encroachment, agricultural practices, and livestock grazing remains an issue in the ongoing conservation of this species. These problems seem to be especially prevalent in the southern half of their range and account for much of recent population decline.

Especially severe in the northern half of their range, over-hunting poses a serious danger to zebra populations. They are hunted for their meat and their distinctive skins.

Our solutions to protecting the plains zebra:Set aside safe space for wildlife.

AWF works with governments and communities to designate wildlife corridors — large swaths of land that zebras can use to from one park, or country, to another. Corridors link protected areas and allow wildlife to follow rains or migrate to their feeding grounds.Promote sustainable livestock management.

In Kenya, communities have improved their livelihoods through a partnership with Ol Pejeta Conservancy, financed by African Wildlife Foundation. The Linking Livestock Markets to Conservation initiative links pastoralists to premium livestock markets and provides high prices to pastoralists who adhere to conservation criteria, thereby reducing overstocking, rangeland degradation, and resource competition for wildlife.

Every year, hundreds of thousands of zebras gather up their young and begin the long journey from Tanzania’s Serengeti plains, north to Kenya. This annual trek to find food and water covers a distance of around 2,900 kilometers (1,800 miles) and exposes them to a myriad of dangers. River crossings leave herds vulnerable to crocodiles, while the size of the migration itself brings lions, hyenas, and wild dogs.

They live in small family groups called “harems.” These groups consist of one stallion, several mares, and their offspring. Harems generally remain together for months or even years, making it an incredibly stable family unit.

Plains zebras have at least 6 different vocal calls. A two-syllable call is used to alert herd members to predators while snorts indicate happiness. They also use facial expressions to communicate. When greeting each other, they will stick their ears up and push their faces forward. When feeling threatened, they will press their ears against their heads.

The zebra is not a picky eater.

Unlike many ungulates in Africa, zebras do not require short grass to graze. Instead, they eat a wide variety of different grasses, sometimes even eating leaves and young trees. As a result, they can range more widely than many other species, often venturing into woodlands. They are considered to be “pioneer grazers” —  preparing plains for more specialized grazers who rely

Zebra on the Masai Mara, Kenya.

The plain zebra is by far the most common. The mountain zebra has 2 subspecies, and plains has 6 (plus a seventh extinct subspecies). However a DNA study in 2018 argues against the subspecies structure in plains zebra.