WHAT DO GORILLAS EAT? AND OTHER GORILLA FACTS 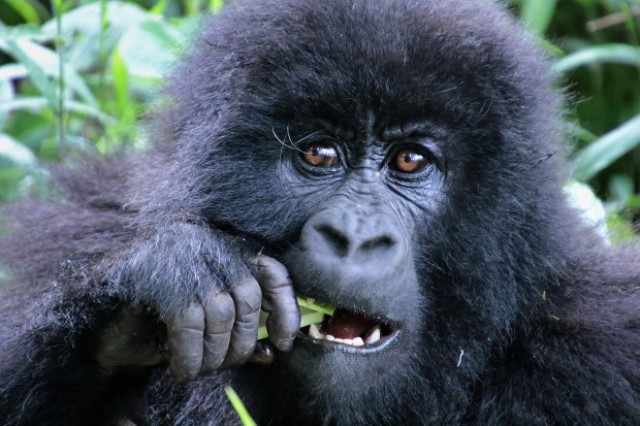 Gorillas, the largest living primates, make their homes in central and east Africa. They function in a well-developed social structure and often exhibit behavior and emotions similar to the human experience, including laughter and sadness. Poaching, disease and habitat destruction remain threats for gorillas, and WWF is working to designate new protected areas where populations can thrive.

Read on for some common questions about gorillas.

What do gorillas eat?

Gorillas stick to a mainly vegetarian diet, feeding on stems, bamboo shoots and fruits. Western lowland gorillas, however, also have an appetite for termites and ants, and break open termite nests to eat the larvae.

Gorillas move around in family groups that can range from a couple of individuals to more than 40 members. A dominant male leads and holds the position for years.

How closely related to gorillas are humans?

Charismatic and intelligent animals, gorillas share 98.3% of their DNA with humans. They are our closest cousins after chimpanzees and bonobos.

What threats do gorillas face?

Poaching, diseases such as Ebola, and habitat destruction threaten the four gorilla subspecies; most gorillas live outside of protected areas. WWF works to designate new gorilla sanctuaries, such as in Congo.

How big do gorillas get?

Adult male gorillas weigh up to 440 pounds and can reach a height of six feet when standing on two legs. Mature male gorillas are known as “silverbacks” for the white hair that develops on their back at about 14 years of age.

How often do gorillas give birth?

Females have a gestation period of 8.5 months and nurture their young for several years. Generally, females give birth to one baby every four to six years. This slow population growth makes it harder for gorillas to recover from any population decline.

The illegal trade of gorillas and other great apes is a problem across Central Africa. WWF works with partners to monitor this trade and advocates for more effectively enforced wildlife laws.

WHAT DO GORILLAS EAT? AND OTHER GORILLA FACTS
Book Now