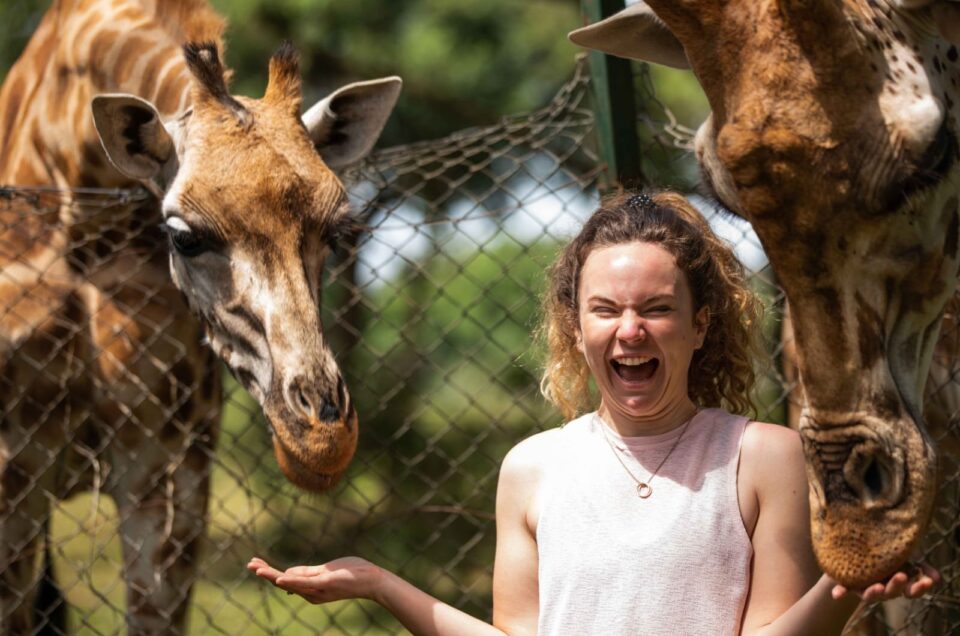 UWEC In 1952 was Popularly known as “Entebbe Zoo”, was opened in 1952, by the Colonial Government in Uganda, as a reception centre for wild animals that were found as casualties (sick, injured, orphaned, confiscated from illegal trade etc).

1960s In the early 1960s, it changed its role to a traditional zoo (“Entebbe Zoo”), a name that rings memories in the minds of many Ugandans to date. At that time, a number of non-indigenous species, including bears and tigers, were kept as attractions.

1994, In May 1994, the UWEC Trust was founded to take over the zoo primarily for Conservation Education purposes. The Centre’s location on the edge of Lake Victoria, its rich vegetation and its surprisingly wide range of birds, butterflies and other indigenous animals make it an attractive venue for education as well as a pleasing one for those who visit, whether Ugandans or people from overseas

Did you know?The former Entebbe Zoo derives its name from Entebbe town. “Entebbe”, in the local Luganda language, means a “seat”, and was probably named that because it was the place where the Buganda chief sat to adjudicate legal cases.

It first became a British colonial administrative and commercial center in 1893 when Sir Gerald Portal, a colonial Commissioner, used it as a base.

Port Bell went on to become Kampala’s harbor. Although no ships dock there now, there is still a jetty, which was used by Lake Victoria ferries. Entebbe is perhaps best known to Europeans as the home of Entebbe International Airport, the main international airport of Uganda, which was inaugurated in 1947.

The Entebbe airport was the scene of one of the most daring counter-terrorism operations in history when soldiers from an elite unit of the Israeli army freed over 100 hostages following a hijacking by a group of Palestinian and German militia.

What do we do

Our Veterinary staff and animal keepers are always on standby to attend to injured, sick or stressed animals. We work closely with other stakeholders like the Uganda Wildlife Authority (UWA) and communities. However, we believe that rescuing animals is just a short-term solution.

UWEC believes that attitude- and behavioral change through creating awareness is a more sustainable approach to species survival. That is why we value conservation education. Please check out “School and Community Programs” to learn more.

Treatment of injured and sick Animals

If a sick or injured animal arrives at UWEC, a physical examination is undertaken by our staff which consists of Veterinarian, (Animal doctor), nurse and keepers.

Our veterinary and animal caretakers undertake a series of activities throughout the year like daily observations, running blood and fecal samples, physical animal examination etc. to ensure that all animals are healthy and do not carry over diseases.

Depending on their individual health status, some animals need to be kept for a long time for special care or rehabilitation before they can be released into the wild again or integrated in our Centre.

Our facility has also got a wildlife quarantine area outside the general public’s view in order to prevent infectious disease transfer. Our Veterinary unit plays an important role by ensuring that quarantined and exhibited animals are healthy.

UWEC has evolved from just displaying animals to visitors to playing a vital role in conservation. UWEC has the mandate to breed species which are at risk of extinction in the wild. This role enables the entity to build a healthy animal population as a backup for endangered species.

Breeding at UWEC is carefully managed to control numbers and to prevent inbreeding. The aim is to ensure genetic variation in the captive population. This can only be achieved by using comprehensive record of each individual animal.

Traditionally, animals were kept in zoos for the purpose of human entertainment, and there was little commitment to animal welfare standards. Assessing the role of zoos in wildlife conservation.

Alongside this transformation came an increased focus on animal welfare. This focus has resulted in an intensification of zoo-based science dedicated to;

(a) Evaluating the success of conservation aims.

This focus on empirical operating philosophies for zoos has led to the development of zoo animal welfare science as a specialization within the broader field of welfare science.

Research is an integral component of successful zoo-based conservation. UWEC is committed to conducting quality research that provides opportunities for scholars involved in wildlife research using our facilities to conduct ex-situ research.

Researching captive animals increases our knowledge on their care and biology, which may not be possible in the wild. UWEC is home to more than 500 animals from nearly 100 species many of which are endangered in the wild and in conservation breeding programmes.

Many of the animals were injured, confiscated or orphaned. There are a variety of animals which include; Carnivores, Hoof storks, Primates, Birds, and Reptiles

We support research which improves animal welfare and health that promote conservation. We are committed to supporting high quality research at all levels from high school projects to post-doctorate theses.

Our research facilities include a library, computers with standard software, internet access, access to zoo animal records and a database of zoo-specific documents

Our focus is on applied research that has tangible outcomes for the following key thematic areas:

UWEC will continue to identify and develop specific research projects that address key knowledge gaps and aim to improve our conservation and animal care activities.

We have a Projects and Research Committee that co-ordinates the research projects, including research conducted at our premises, in the field, and in partnership with other research organizations.

Our Onsite and Outreach Conservation team also engages in research that allows us to increase the effectiveness of our behavior change campaigns, visitor experiences and education goals.

All proposals are evaluated against a set of criteria to determine their alignment with our research and organisational priorities with approval dependent on feasibility, resources and animal welfare and ethical considerations.

The Uganda Wildlife Conservation Education Center is a fun and exciting place to see and learn about the animals of Uganda and the ecosystems in which they live. Take some time to learn how they live, eat, play, and walk.

Originally founded in the 1950s to accommodate confiscated and injured wildlife and to look after orphan animals confiscated from smugglers, the centre has grown considerably in recent years. Many say its destined to become the most important facility to showcase  wildlife on the African continent.

Created by the government of Uganda with the help of the Wildlife Conservation Society in New York and managed by a Wildlife Trust, it never fails to delight. At UWEC you will come across free ranging Vervet monkeys and a family troop of DeBraza monkeys in the jungle of our hillside forest.

Over 120 bird species can be watched ranging from the famous African fish eagle, over the Great Blue Turaco to Hammerkops, Giant Kingfisher and even the smallest sun birds.

UWEC is not a zoo in a conventional sense and neither is it a Safari Park but it is a center where wildlife education is combined with leisure.

Our main aim is to model the main ecosystem of this country in open range exhibits. Not only can you observe many of our most exciting indigenous species here, but comprehensive interactive interpretation and briefings on them are also given.

Wild animals have been kept in captivity for thousands of years, as symbols of power or religious significance and many times as pets for those that have the love and fascination for animals.

If you are interested in botany you will also find live collections of traditional medicinal plants.

However, what we now recognize is the need to use the animals in our care to inspire behavior-change and conservation-action, especially among the young people in our society. The transition from the traditional zoo to the Education Centre came with the demands for a complex operation:

Through visiting the facility, one makes a direct contribution to the daily operation as well as enabling the Education Centre to undertake field conservation activities aimed at ensuring that the few wildlife is saved for the generations to come.

Bring your class or pupils along for a visit at UWEC Zoo and joins as on the learning journey which helps you discover the unique aspects of animals under our care! Come close to them, explore, enjoy and learn. Make prior arrangements for special programs designed to fit your school or class learning abilities. UWEC is the prefect hands on learning

We have specially trained educators/ guides who take visitors through an engaging and thematic guided tour of the facility. They help identify the animal species both in English and local languages, tell you about their cultural values, conservation status, animal anecdotes, habitats and help you decide on a positive conservation action to ensure species survival or recovery plan.

Although we lay special emphasis on young people, our guides are equally equipped to handle adults in a way that makes the information meaningful and entertaining.
We have our guides stationed at every animal exhibit, ready to go down the journey of conservation education with you!

Boasting a diverse and highly skilled Education Team, we provide unique learning sessions for all ages and abilities. We have tried to link environmental education sessions to the National Curriculum, using an experiential learning approach using resources such as live animals, biofacts, multimedia etc.

Our animal exhibits that mimic the animals natural environment equally make the learners even appreciate the key learning!

We provide a practical hands on opportunity to students through; industrial/ internship placements as part of the requirement for the award of their different degrees and diplomas, as well as enabling them gain a much needed work experience.

Workshops and Seminars for teachers, students, youths and community leaders.
Participate in seminars, workshops and exchange ideas on how you help find solutions to the environmental challenges that affect your society. We engage leaders, communities, teachers and students as we think about the future.

Self-Guided Tour
You can have self- guided tour, by just following the signage. Get more information on; species, habitat and ecosystems relationships, functions, importance and challenges to their conservation and management.