Uganda the pearl of Africa 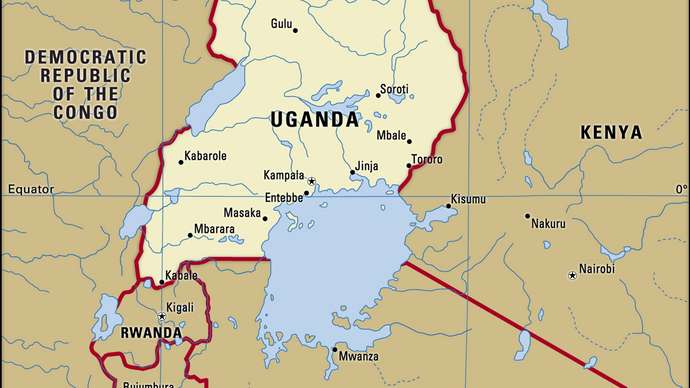 Uganda, country in east-central Africa. About the size of Great Britain, Uganda is populated by dozens of ethnic groups. The English language and Christianity help unite these diverse peoples, who come together in the cosmopolitan capital of Kampala, a verdant city whose plan includes dozens of small parks and public gardens and a scenic promenade along the shore of Lake Victoria, Africa’s largest freshwater lake. The Swahili language unites the country with its East African neighbors Kenya and Tanzania.

Uganda obtained formal independence on October 9, 1962. Its borders, drawn in an artificial and arbitrary manner in the late 19th century, encompassed two essentially different types of societies: the relatively centralized Bantu kingdoms of the south and the more decentralized Nilotic and Sudanic peoples to the north. The country’s sad record of political conflict, coupled with environmental problems and the ravages of a countrywide AIDS epidemic, hindered progress and growth for many years. Yet, even so, at the beginning of the 21st century a popularly elected civilian government ruled Uganda, which had attained political stability, had set an example for tackling the AIDS crisis that threatened to overwhelm the continent, and enjoyed one of the fastest-growing economies in Africa.

Uganda is bordered by South Sudan to the north, Kenya to the east, Tanzania and Rwanda to the south, and the Democratic Republic of the Congo to the west. The capital city, Kampala, is built around seven hills not far from the shores of Lake Victoria, which forms part of the frontier with Kenya and Tanzania.

Most of Uganda is situated on a plateau, a large expanse that drops gently from about 5,000 feet (1,500 metres) in the south to approximately 3,000 feet (900 metres) in the north. The limits of Uganda’s plateau region are marked by mountains and valleys.

To the west a natural boundary is composed of the Virunga (Mufumbiro) Mountains, the Rwenzori Range, and the Western Rift Valley (East African Rift System). The volcanic Virunga Mountains rise to 13,540 feet (4,125 metres) at Mount Muhavura and include Mount Sabinyo (11,959 feet [3,645 metres]), where the borders of Uganda, the Democratic Republic of the Congo, and Rwanda meet. Farther north the Rwenzori Range—popularly believed to be Ptolemy’s Mountains of the Moon—rises to 16,762 feet (5,109 metres) at Margarita Peak, Uganda’s highest point; its heights are often hidden by clouds, and its peaks are capped by snow and glaciers. Between the Virunga and Rwenzori mountains lie Lakes Edward and George. The rest of the boundary is composed of the Western Rift Valley, which contains Lake Albert and the Albert Nile River.

The northeastern border of the plateau is defined by a string of volcanic mountains that include Mounts Morungole, Moroto, and Kadam, all of which exceed 9,000 feet (2,750 metres) in elevation. The southernmost mountain—Mount Elgon—is also the highest of the chain, reaching 14,178 feet (4,321 metres). South and west of these mountains is an eastern extension of the Rift Valley, as well as Lake Victoria. To the north the plateau is marked on the South Sudanese border by the Imatong Mountains, with an elevation of about 6,000 feet (1,800 metres).

Uganda’s Lake Victoria (26,828 square miles [69,484 square km]), in the southeastern part of the country, is the world’s second largest inland freshwater lake by size after Lake Superior in North America, although Lake Baikal in Siberia is larger by volume and depth. Victoria is also one of the sources of the Nile River. Five other major lakes exist in the country: Edward and George to the southwest; Albert to the west; Kyoga in central Uganda; and Bisina in the east. Together with the lakes, there are eight major rivers. These are the Victoria Nile in central Uganda; the Achwa, Okok, and Pager in the north; the Albert Nile in the northwest; and the Kafu, Katonga, and Mpongo in the west.

The southern rivers empty into Lake Victoria, the waters of which escape through Owen Falls near Jinja and form the Victoria Nile. This river flows northward through the eastern extension of Lake Kyoga. It then turns west and north to drop over Karuma Falls and Murchison Falls before emptying into Lake Albert.

Lake Albert is drained to the north by the Albert Nile, which is known as the Al-Jabal River, or Mountain Nile, after it enters South Sudan at Nimule. Rivers that rise to the north of Lake Victoria flow into Lake Kyoga, while those in the southwest flow into Lakes George and Edward.

Except for the Victoria and Albert Niles, the rivers are sluggish and often swampy. Clear streams are found only in the mountains and on the slopes of the Rift Valley. Most of the rivers are seasonal and flow only during the wet season, and even the few permanent rivers are subject to seasonal changes in their rates of flow.

The soils, in general, are fertile (and primarily lateritic), and those in the region of Lake Victoria are among the most productive in the world. Interspersed with these are the waterlogged clays characteristic of the northwest and of the western shores of Lake Victoria.

The tropical climate of Uganda is modified by elevation and, locally, by the presence of the lakes. The major air currents are northeasterly and southwesterly. Because of Uganda’s equatorial location, there is little variation in the sun’s declination at midday, and the length of daylight is nearly always 12 hours. All of these factors, combined with a fairly constant cloud cover, ensure an equable climate throughout the year.

Most parts of Uganda receive adequate precipitation; annual amounts range from less than 20 inches (500 mm) in the northeast to a high of 80 inches (2,000 mm) in the Sese Islands of Lake Victoria. In the south, two wet seasons (April to May and October to November) are separated by dry periods, although the occasional tropical thunderstorm still occurs. In the north, a wet season occurs between April and October, followed by a dry season that lasts from November to March.

Vegetation is heaviest in the south and typically becomes wooded savanna (grassy parkland) in central and northern Uganda. Where conditions are less favourable, dry acacia woodland, dotted with the occasional candelabra (tropical African shrubs or trees with huge spreading heads of foliage) and euphorbia (plants often resembling cacti and containing a milky juice) and interspersed with grassland, occurs in the south. Similar components are found in the vegetation of the Rift Valley floors. The steppes (treeless plains) and thickets of the northeast represent the driest regions of Uganda. In the Lake Victoria region and the western highlands, forest covering has been replaced by elephant grass and forest remnants because of human incursions. The medium-elevation forests contain a rich variety of species. The high-elevation forests of Mount Elgon and the Ruwenzori Range occur above 6,000 feet (1,800 metres); on their upper margins they give way, through transitional zones of mixed bamboo and tree heath, to high mountain moorland. Uganda’s 5,600 square miles (14,500 square km) of swamplands include both papyrus and seasonal grassy swamp.

for more details visit us