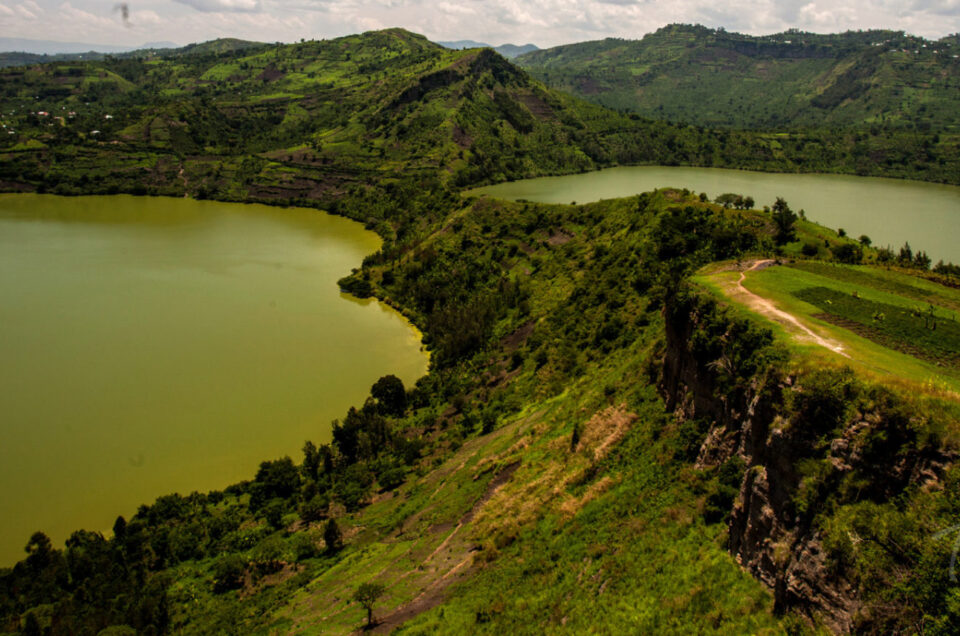 Rubirizi District formerly Bunyaruguru County was carved out of Bushenyi District in July 2010 in south western part of Uganda. Due to its location in the western arm of the East African Rift Valley that crosses Queen Elizabeth national park,

Rubirizi is endowed with 56 craters of which 32 are crater lakes. Among the lakes are two pairs of twin lakes according to the district planner’s database.

The pair located in Magambo Sub-county, are part of the 32 crater lakes and one pair of twin lakes, sit on the western arm of the East African Rift Valley.

Separated by a small portion of land, Lake Kyema spots clear water while Kamweru’s water is green. It is said the green colour of water is due to fish droppings known as omuboyo in the local Runyakitara language.

Although science attributes the formation of these lakes to volcanic eruption in the 17th Century, folklore tales of interesting stories, a lot of which form the mystery of these lakes.

According to locals of Magambo Sub-county, Lake Kamweru was a crater which later got filled up with water from a nearby lake Nzuguto, that is now a wetland.

Many people who lived in Kamweru crater died, and nobody took record of it that is why the government does not think about Rubirizi District and its tourism potential and culture,’’ says Daniel Katugano, 74, a resident.
Katugano owes his story to his father who he says migrated from Buganda to the area in 1797.
H

e tells of how Endyoka, the owner of the lake, mysteriously transferred the water of Lake Nzuguto to Kamweru.
“

Heavy water waves, commonly known as endyoka mukama we Nyanja (Endyoka king of the lake), passed through the soil via the cave and transferred water from then Lake Nzuguto,” says Katugano.

However, the Rubirizi District planner Edmond Kansiime has this to say. “Due to volcanicity, the land developed fault lines to the crater and water followed fault lines from Nzuguto to Kamweru through the cave forming Lake Kamweru.

People’s stories are just thoughts that cannot be proved scientifically. Basically people attribute a lot of things to these lakes Kamweru and Kyema but there is no scientific proof. Those are just superstitions which are not true.”

Nonetheless, Kansiime adds that these are the only conjoined lakes in Africa, which makes the district a good tourism potential.

Lake Kamweru has a heritage cave besides it which fills the crater with water and there are many tree species around it harbouring monkeys and other wild animals.

The heritage cave is said to have been the residents’ hiding place during the Idi Amin and Milton Obote regimes as well as during the NRA bush war.

“During Obote and Amin’s regimes people would prepare food early before the soldiers would attack them and hide in the cave for some days. Equally so, in 1981, NRA rebels would pass by the cave without noticing that there were people hiding in it.

But before those political events, the cave was used for sacrifice by the owners of the lake, the Bagesera clan,’’ Katugano says.
The cave is one of the attractions, David Birungi, the owner of Nyanzibiri Eco Tourism site along Lake Kamweru takes pride in.

At Nyanzibiri Eco-tourism site, tourists enjoy canoe rides as they look at beautiful birds, and have walks through a community wetland that supplies water to Lake Kamweru, budding and spot fishing. Cultural tourism with the Banyaruguru community is also a major attraction.

According to Kansiime, the lake’s green colour and the terrain of the area where the lakes are located also make them a great tourism site.

However, according to Birungi, the government has neglected Rubirizi District tourism features so individuals have decided to develop tourism in the district themselves even if they are being frustrated by hash laws.

But Kansiime attributes this line of thought to the centralised nature of the tourism sector, which has made local people think it has been neglected. “As a district we would love to have the district fund tourism, have space in the media but unfortunately tourism remains centralised and local people do not see the importance hence call it neglect,” he says.

Residents like Katugano hope that the district and sub-counties would set up rules to regulate human activity on the lake. The leaders should stop residents from over fishing in them, cultivating near them, and deforestation around them.
This would lead to high productivity and earn the government a lot of revenue so that we can get better services.

Myths about the twin lakes

An interesting tale goes that, in the months of June and July, fish floated on the water of the twin Rivers allowing residents to easily fish them out with baskets or spears. It was attributed to heat at the bottom of the lakes and the phenomenon was termed as “Okufa kwe Nyanja’’ (dying of a lake).

However, according to Katugano, a clan believed to be the owners of the lake, called the Bazumira didn’t participate in this.

They were respected for their role as locaters of dead bodies of those who had drowned in the lakes. They carried out rituals and were believed to sacrifice sheep to prevent death in the lakes. However, with the advent of Christianity, such traditional clans and rituals have since died and currently no one owns the twin lakes.