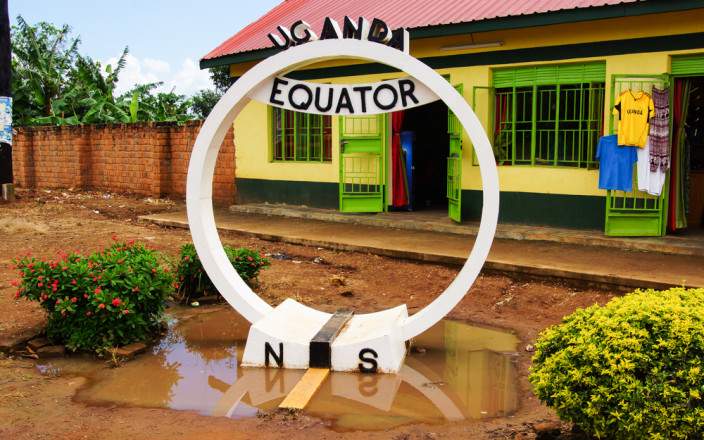 The Uganda equator is one of the most and well known landmarks in Uganda.

” The intersection of the earth’s surface with the plane perpendicular to the earth’s axis of rotation and containing the earth’s center of mass” is what Wikipedia sometimes refers to the equator as, but it is still the imaginary line that divides the world into two halves.

The Equator is an imaginary line that is seen on maps marking the equidistant from the North and South Pole.

Along the imaginary line of the equator, a magnetic needle has no dip and stabilizes in perfect horizontal position.

The sun rises and falls rather so fast at the equator, with equal days and nights’ length.

The people around the equator experience only warm temperatures and tropical climate throughout the year and therefore quite hard to tell the difference between seasons.

The Equator is located in Kayabwe, Mpigi District, about 72 kilometers from Kampala city, the capital of Uganda.

You will find the poster for the Uganda Equator on Kampala-Masaka road 420 kilometers from Kampala. South west of Kampala; you will be able to locate markers of the equator in Kasese District within the Queen Elizabeth National Park.

You will experience warm temperatures while at the Equator as you stand in the middle of the world. Please remember to have a sunscreen for your skin.

How Does Water Swirl In Opposite Directions At The Different Spheres At The Equator?

It is at the equator where you will see water drain straight down. The movement and drainage of the water will differ from the Northern and the southern hemispheres at the Equator line.

In the demonstration of the carioles effect. With movement that changes direction suddenly, something in motion to the left or right when moving on a rotating body like the earth.

In some cases pressure weather cyclonical systems perform this, having a clockwise rotation in the north and a counter clockwise in the southern hemisphere.

From a realistic perspective, you may not be able to see this as motion would not be seen with water in small amounts. At the equator, a show man ship is used to stimulate the effect.