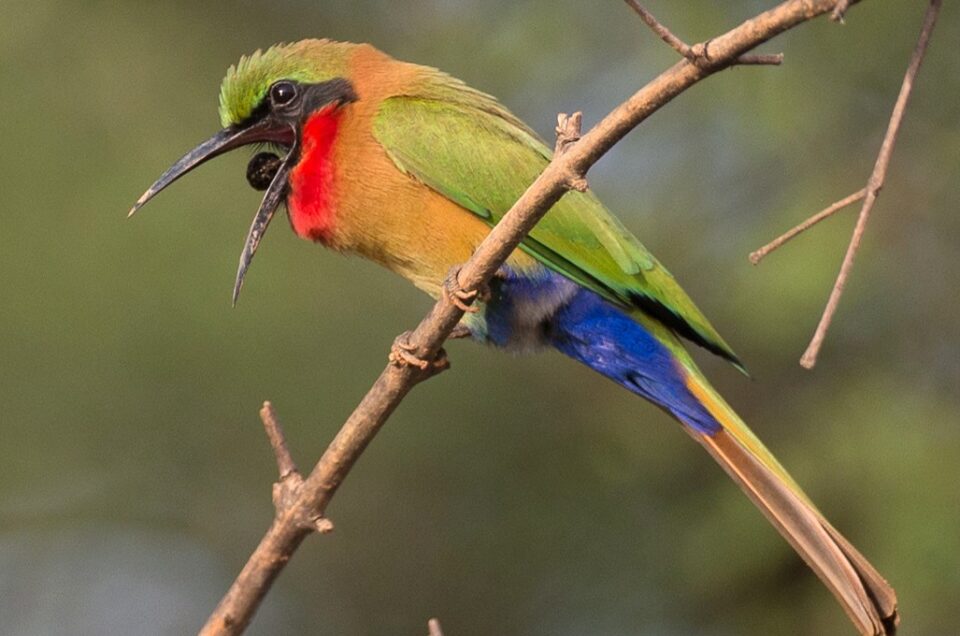 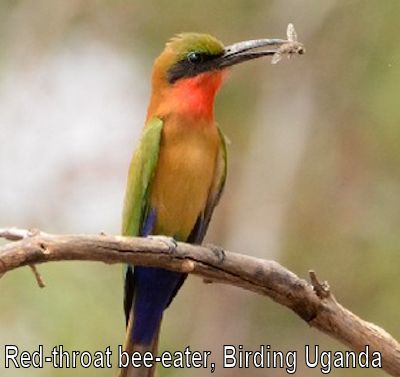 The Red throated Bee-eater scientifically known as (Merops bulocki) is a beautiful green and red bird that is mainly found within western Africa, however can be seen in Uganda as well especially in the northwestern part of the country. So if you plan to visit Uganda for a bird watching safari, you will have an opportunity to see this bird. This beautiful bird belongs to the meropidae family.

Where to see the Red-throated Bee eater in Uganda

On your visit in Uganda, you will have an opportunity see this beautiful bird. These birds preferably live close to lakes, rivers, bushes as well as in wooded grasslands.

On your birding safari you can see these birds in the trees along the shores of river Nile just after the breathtaking powerful Murchison Falls, at the Kazinga Channel as well as on the shores of Lake Albert.

How to identify a Red-throated Bee-eater Bird

This red throated bee-eater is a beautiful extremely colorful tiny bird that is approximately 23 centimeters long. It can actually be identified by the red colored feathers found in its neck.

The tail feathers of this bird have a combination of green and brown feathers with the brown being the dominant color. The lower under-side has blue feathers while its small legs are black in color. It is indeed a very colorful bird however the young ones have a paler color. 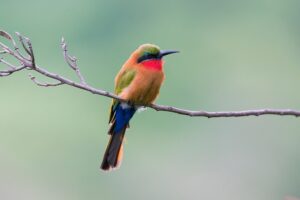 How the Red throated Bee-eaters Communicate

These Red-throated Bee eaters communicate by making a number of different brief calls in form of harmonious yaps and churls that are normally high pitched.

These bird eaters usually breed in areas near water sources as well as in open areas with bushes. These birds lay four to six eggs which can be incubated by either the male bird or the female bird.

For more information about the Birds in Uganda