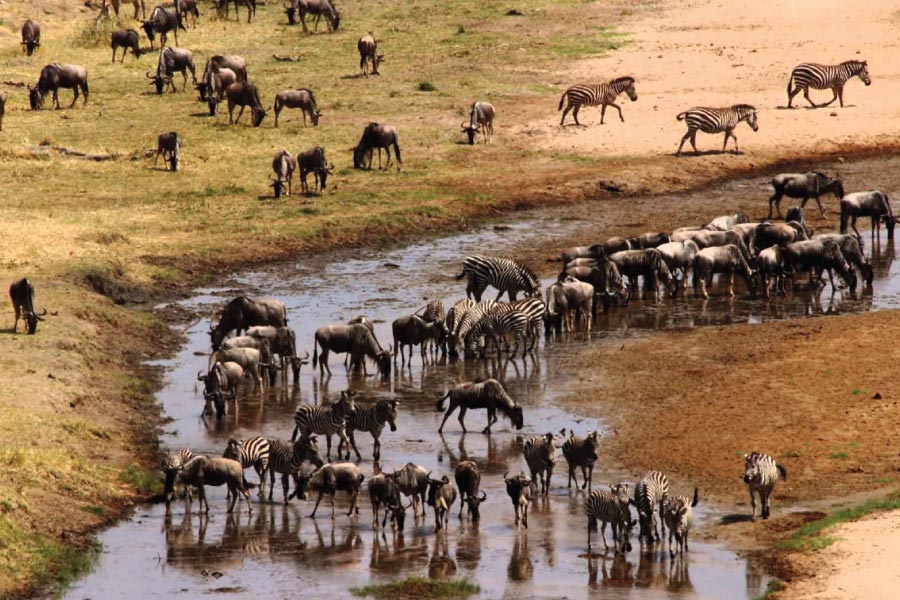 Tarangire National Park portal is a non-commercial with all information from wildlife, attractions, Tarangire activities, to safari accommodation, when to go, how to get there, Tarangire Safaris & Tours, Cost of Tarangire Safari and a travel blog.

Ranking as the 6th largest National Park in Tanzania and covering an area of 2,600 square kilometers, The Tarangire National Park is most popular for its large elephant herds and mini-wildlife migration that takes place during the dry season which sees about 250,000 animals enter the park.

slightly off the popular northern Tanzania Safari Circuit, the park lies between the meadows of Masai Steppe to the south east and the lakes of the Great Rift Valley to the north and west.

Within the northern part of Tarangire is the permanent River Tarangire also known as the life-line of the park particularly in the dry season when most of the region is totally dry.

This flows northwards until it exits the park in the northwestern corner to pour into Lake Burungi. There are a number of wide swamps which dry into green plains during the dry season in the south.

During you Safari in Tarangire, You are highly recommended to stay for a couple of days especially  in the south of the park which offers a less crowded safari experience and gives you the opportunity to enjoy an authentic African feel of the Tanzania’s countryside.

The permanent Tarangire River is the most dominant feature here and it’s after this river that the park was named. there are a number of large swamps that feed off some of its tributaries however, these are usually dry for most of the year but get very impassable during the rains .

The Tarangire park is usually very dry, in fact drier than the Serengeti, however its vegetation is much more green especially with lots of elephant grass, vast areas with mixed acacia woodlands and some of the wonderful ribbons of the aquatic forest not to forget the giant baobab tree that can live up to 600 years storing  between 300 and 900 liters of water.

Every year during the dry season from June to November Tarangire hosts a wildlife migration which is not as dramatic as the Wildebeest Migration in the Serengeti, but receives a somewhat large number of animals.

As most of this part of the country is dry, the Tarangire River remains the only source of water and consequently attracts large numbers of wildebeests, elephants, gazelles, zebras and hartebeest, buffaloes plus various predators like lions that come to drink and graze around the river banks. during the rain months of November to May.

The zebras as well as large herds of wildebeests move into the north-western direction towards the Rift Valley floor amongst the large numbers of animals that spread across the large open areas of the Masaai Steppe and dispersing all the way to Lake Manyara.

Because Tarangire is manly a seasona national park, its wildlife differ depending on the season and also considering that It is part of a bigger ecosystem. As earlier mentioned, the dry season is the

Tarangire and you will be able to encounter various animals. This park is home to one of the largest elephant populations in Africa with several herds of up to 300 members per herd.

In addition, there are large numbers of impalas, elands, buffaloes, giraffes, Bohor reedbuck, Coke’s hartebeest, Thompson’s gazelle, the greater and lesser kudu and on rare occasions, the unusual gerenuk and fringe –eared Oryx are also seen.

A few black rhinos are also thought to be still present in this park. You will obviously see big numbers of elephants gather here as well as the wildebeests and zebras.

Among the other common animals in the Tarangire are the leopards, lions, hyenas, and cheetah that seem to be popular within the southern open areas. The wild dogs are only seen once in a while

The birds within the Tarangire are also quite many, there are over 545 species that have been identified here. The stunning yellow collared lovebirds and the shy starlings are in plenty here in addition to other species.

: The primary safari activity in this park is game driving however if you live outside the park boundaries you might be able to enjoy walking tours. and night safaris. Currently Oliver’s Camp organizes walking tours as well as fly camping safaris.

: one would wonder, are night game drives allowed in Tarangire? Well Night Game Drives are allowed in the park however, not all accommodations offer these tours. Only those that have properly established all the requirements and regulations offered by TANAPA such as Swala and Oliver’s camp are allowed to conduct these walks.

: Join a hot air balloon ride over the Tarangire as you soar over the treetops of the Tarangire to enjoy an exceptional perspective of wildlife like lions and ungulates right below you

: this is another common activity within the Tarangire during which devotees will be able to spot various bird species.

The overall cost of a Tarangire Safari is determined by the type of accommodation you will be staying and the activities you are going to engage in.

Staying at the super luxury facilities like Chem Chem Lodge for $1,250 per person or Little Chem Chem for $1,200 per night or the Kuro Camp for $857 per night will certainly shot up your safari cost. While mid-range facilities like Tarangire River Camp and the Maramboi tent that charges will offer you a lower safari cost. For budget travelers Lake Burunge Tented Camp will be a good option.

Combining Your Tarangire Safari With Other African Destinations