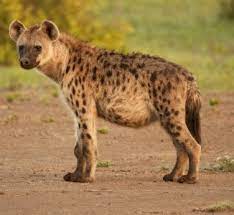 Spotted hyenas are the largest of three hyena species. Brown and striped hyenas are the other two. Although hyenas appear similar to dogs, they are actually more closely related to cats. They live throughout much of Africa and eastwards through Arabia to India. Spotted hyenas live together in large groups called clans that may include up 80 individuals and are led by females. Baby hyenas are cubs. Cubs hide in the den that keeps them safe. A mom usually has two cubs at a time soon as they grow, they join the rest of the clan in hunting.

Spotted hyenas have good hearing and sharp eyesight at night. They are fast and can run for long distances without tiring. Packs work together effectively to isolate a herd animal, sometimes one that is ill or infirm, and pursue it to the death. The victors often squabble over the spoils, either among themselves or with other powerful animals like lions.

Spotted hyenas are quite vocal and make a wide variety of sounds, including the “laughing” that has long been associated with their name. It has a large head with a long, thick, muscular neck and powerful jaws that give the hyena the strongest bite of any mammal. Its front legs are longer than its back legs, giving the hyena a profile somewhat like that of a wildebeest or bison. The spotted hyena’s paws have four toes with non-retractable claws.

They are able to survive in savannas and swamps, as well as semi-arid regions, and even mountainous forest areas. Rather than resting in dens, adult spotted hyenas sleep in holes or shallow pools or under bushes or scrubs—anywhere they can find shade during the heat of the day. Hyenas use watering holes as places to cool off or to hide extra food. Spotted hyenas can be active both day and night, depending on their needs and whether there are humans around, but they are generally nocturnal.

Lions and hyenas compete over the same food in overlapping territories. Sometimes the hyenas do the work of organizing, chasing down, and killing prey only to have lions steal it. Lions often injure or kill hyenas as they fight over a carcass. Both hyenas and lions mark and establish territories, and both species are always on guard. When confronted by a lion, the spotted hyena calls for help from other hyenas.

In a large group, spotted hyenas are able to chase lions away from a kill. But during a hunt, the hyena’s impressive hunting skills come into play. They are able to chase down prey over long distances while running at up to 37 miles per hour (60 kilometers per hour).

Spotted hyenas often pick out the young or weak from the herd, but they can kill even healthy adult ungulates. What they hunt depends on numbers. The bigger the hyena clan, the larger its prey. This can include young rhinos, adult wildebeest, zebras, and Cape buffalo. The hyenas work in a group when hunting such large prey, and young hyenas take years to become successful. Smaller packs chase down gazelles, impalas, warthogs, and waterbucks.

When hunting alone, a spotted hyena may go after smaller prey. Ground birds, rabbits, springhare, bat-eared foxes, porcupines, jackals, and fish can be on the menu. Even ostrich eggs are fair game! Spotted hyenas also scavenge, but they have to compete with jackals and vultures for these leftovers.

A hyena can eat quite a bit at one time. Sometimes, leftovers are buried in a mud hole for a later meal. Spotted hyenas give new meaning to the phrase “lick the platter clean.” They eat practically every part of their prey, including skin, hooves, bone, and teeth. Powerful jaws are able to crush bones with ease. Most other predators couldn’t eat those things, even if they tried. There are some items that hyenas can’t digest, such as hair and horns, although they still eat them.

Book your game drive with us.

we are Azas safaris Uganda.