AmaXhosa love meat, and during rituals where animals are slaughtered, no part is wasted – the head, feet and tripe (stomach) are all eaten. Beef tripe and sheep tripe are both a delicacy, and are usually cooked like a stew. 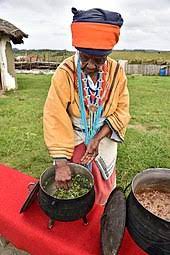 Tripe is eaten on its own, or with samp (dried corn kernels that have been stamped and chopped until broken) or stiff mieliepap (maize meal porridge).

Samp is a staple dish of the Xhosa people, and it can be eaten on its own or mixed with mashed potato. It can also be cooked with beans and eaten with meat and gravy.

Sheep heads and trotters, and chicken feet and heads are eaten as snacks, accompanied by samp or mieliepap.

A cow head can feed a family and is not as expensive as regular meat such as steak and brisket, which is why it’s so popular. A cow head is usually given to men when they attend a ritual, while the women are given tripe.

A popular summer meal known as “African salad” is umphokoqo, a crumbly maize meal with sour milk or butter milk. Other well-loved side dishes are umqa, umxhaxha and umkhuphu.

Umqa is a stiff maize meal porridge and can be cooked with curried cabbage or spinach, umxhaxha is a combination of pumpkin and corn, and umkhuphu is maize meal and beans.

Another favorite is boiled mielies which can be eaten as a snack. In townships, eating mealies is called “playing the harmonica”.

They’re also eaten after funerals, and served at the gate of the home where the funeral is. Guests are given water to wash their hands, and there will be dishes filled with corn at the gate, which guests eat before the main meal is served.

In Xhosa culture, meals were not typically controlled by time like they are in the European culture. Eating in the morning would be done before families dispersed to do their daily chores, otherwise people ate when they were hungry.

Meals would be cooked in the morning and late afternoon when people returned from the fields or from herding cattle and so on. Usually if people felt hungry during the day they would eat whatever had been left over from the morning meal. 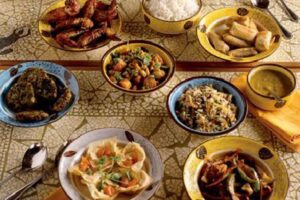 Things have changed a lot, since Africans have been greatly influenced by European eating habits, and now we look at our watches before eating because meals have titles nowadays.

African cuisine has also become very popular for tourists who flock to the townships for authentic African meals.