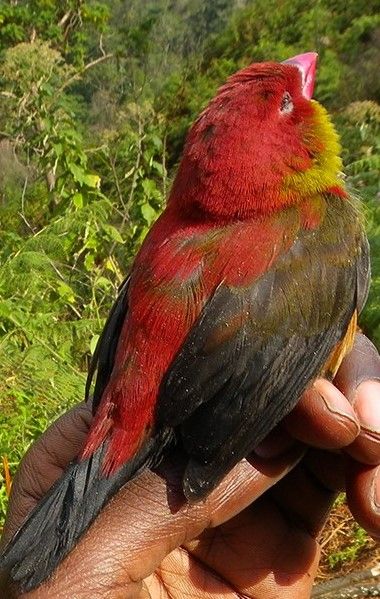 Is Scientifically known as (Cryptospiza shelleyi) is a beautiful small brightly colored and hard to pin down bird. Very few people have actually got the opportunity to see this bird especially within the Albertine Rift Valley’s montane forests where it is prevalent.

This very rare species which is grouped by the IUCN as Vulnerable and listed on the IUCN Red-List of Threatened Species is present in Uganda and listed among the country’s top ten most sought after bird during Uganda Birding Safaris.

Although records about this bird run to over one hundred years ago, very little is known about the breeding ecology, behavior or even diet of this bird.

Despite the fact that there are no records ever showing that this bird once existed in large numbers, it is scientifically assumed that this species is speedily decreasing in numbers since the 1970’s maybe because of the current destruction of wildlife habitat.

And today it estimated that there could be between 2500 and 2000 birds only remaining in the entire world. These birds have been seen in western Uganda, Burundi, Rwanda and the eastern D.R Congo. 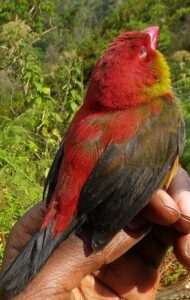 The male has its face, crown and back bright red in color, with its wings and tail black in color, while its under-parts are olive-yellow with darker tones on its belly. On the other hand, the female has an olive head with a bit of red on its mantle and the rest of the body.

These birds live in closed canopy of moist forests, especially on the lower levels of verdant valleys close to water, and in the lower secondary growth around the forest edges, in forest clearings as well as in glades that are dominated by bamboo thickets and large herbs.

Where to see Shelley’s Crimsonwing Habitat

These birds can be seen in some areas within the Albertine Rift Mountains such as the Bwindi Impenetrable Forest and the Rwenzori Mountains in Uganda; Bururi Forest in Burundi; Mukura Forest, Gishwati forest and Nyungwe Forest in Rwanda; as well as in  Itombwe Mountain, west of Lake Kivu and Kahuzi-Biéga National Park in the D.R Congo 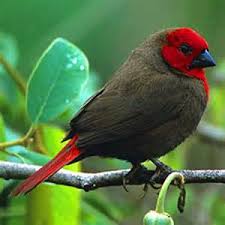 The IUCN has suggested that researchers examine the decline in the Shelley’s crimsonwing overall population, so as to evaluate threats of the species’ extinction.

The research will include surveying the magnitude of their habitat. Research is being done within the Bwindi  National Park of Uganda, Virunga National Park,Nyungwe Forest Reserve and Rwenzori Mountains National Park