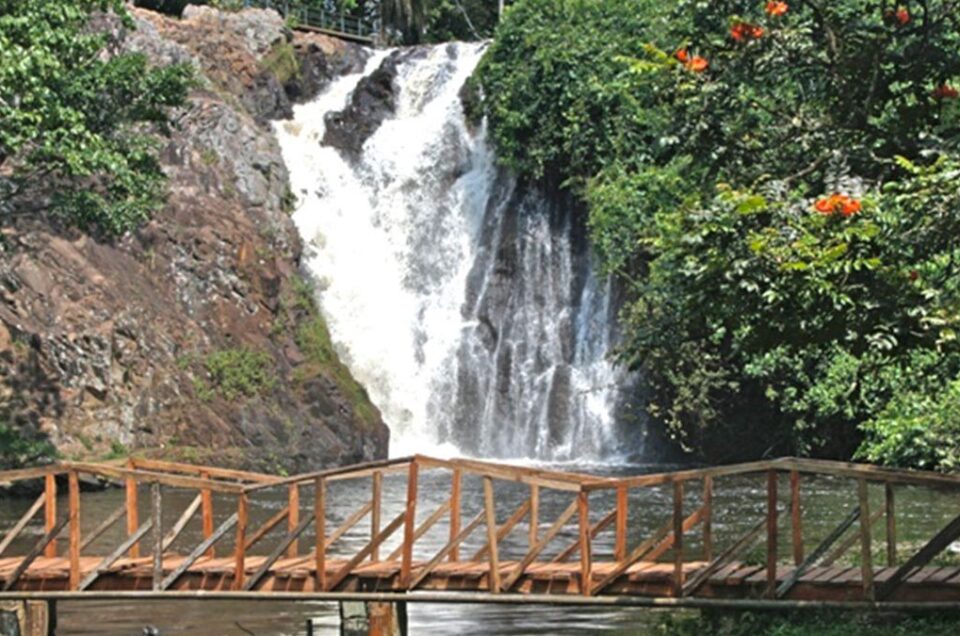 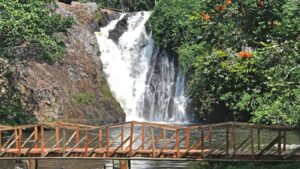 The Sezibwa Falls are located 32 Km along the Kampala- Jinja highway. It is one of Uganda’s hidden cultural treasures with one part owned by Buganda Kingdom and another by the Anglican Church of Uganda.

The sezibwa falls tour is usually part of the famous Jinja one day tour that takes you to Mabira forest and source of river Nile.

You can alternatively have this tour included on your longer Uganda safaris like the gorilla safaris, wildlife safari, birding safari or the cultural safaris.

The source of Sezibwa river is in Buikwe District and runs for a total length of about 150 km from the source to the end.

The Sezibwa falls site offers beautiful views of waterfalls marked with sharp-edged rocks and splendid sound of waters flowing down the indented rocks.

The Sezibwa Falls are 7 meters high with beautiful scenery for relaxation and enjoyment as birds sing in the trees.

There is a traditional legend believed concerning the origin of Sezibwa river and subsequently sezibwa falls according to the Baganda people residing in this area.

The river is believed to have been born by a woman named Nakkungu Tebatuusa whose husband was Nsubuga Sebwaatowho while on her way to Kavuma Bukunja.

Nakkungu Tebatuusa is believed to have given birth to twins in form of water which became River Sezibwa and Bwanda according to the traditional legend.

The name Sezibwa is derived from a Luganda phrase “sizibwa Kkubo” which translates into “my path can never be blocked” and this the locals say is because its flow could not be stopped even with different obstacles it encountered along its 150 km long distance.

Visit the sezibwa falls and enjoy learning more about this legend from the tour guides resident at the Sezibwa falls area.

On arrival at the sezibwa falls after being welcomed by the resident tour guide, you will soon embark on your tour of the area.

Later you will come to an area with many shrines where people come for worship and other performing cultural rituals at the top of the Sezibwa falls.

The traditional healers have different shrines where people camp for days or overnight depending on their request as they seek for blessings and removal of curses from their ancestors through the traditional doctors.

The worshipers believe the falls have supernatural powers that connect them to their ancestors to receive long life, defeat of their enemies, wealth among their many needs.

For example one of the prominent shrines is “Mbuga ya Musoke” where they claim to have a resident python known as Nalongo with a traditional healer performs ceremonies for those seeking love, children, business success or good harvest.

Sezibwa falls area is one of the many destinations for birding in Uganda. For an avid bird watcher this makes a good weekend away exploring some of the common and rare species of birds.

The area is rich in some water birds, forest species and some Situs Slot Gacor species found in the agricultural gardens adjacent to the falls.

Some of the birds found in this area include the rare African finfoot which was previously only known to be easily seen on a boat trip in Lake Mburo national park.

The giant Kingfisher is also known to enjoy the lower tree branches of trees near the flowing River Sezibwa after the water falls. 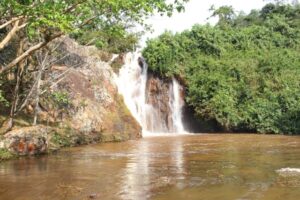