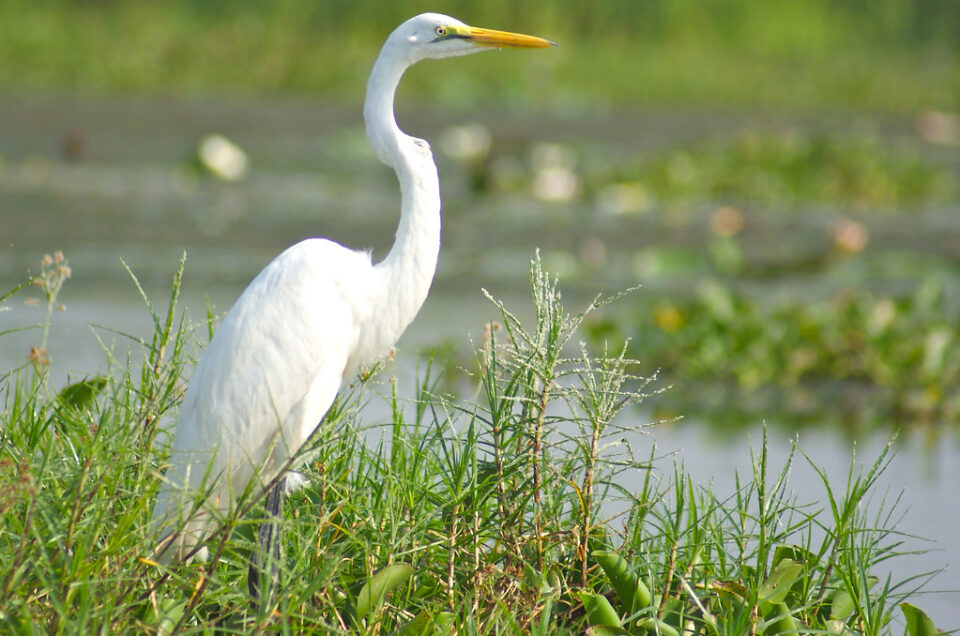 Semliki National Park sprawls across the floor of the Semliki Valley on the remote, western side of the Rwenzori. The park is dominated by the easternmost extension of the great Ituri Forest of the Congo Basin. This is one of Africa’s most ancient and bio-diverse forests; one of the few to survive the last ice age, 12-18,000 years ago.

The Semliki Valley contains numerous features associated with central rather than eastern Africa. Thatched huts are shaded by West African oil palms; the Semliki River (which forms the international boundary) is a miniature version of the Congo River, the forest is home to numerous Central African wildlife species, and the local population includes a Batwa pygmy community that originated from the Ituri. As a result, this park provides a taste of Central Africa without having to leave Uganda.

While Semliki’s species have been accumulating for over 25,000 years, the park contains evidence of even older processes. Hot springs bubble up from the depths to demonstrate the powerful subterranean forces that have been shaping the rift valley during the last 14 million years.

This is the only park in Uganda to be composed primarily of tropical lowland forest. The forest is very dense and quite flat, creating a startling contrast to the rugged Rwenzori Mountains nearby. The Semliki River attracts many animals. The park is home to eight species of primate, 400 birds and 300 butterfly species. Elephant, buffalo, leopard, civet, bush baby and flying squirrels are also found.

The Sempaya Hot Springs are Semliki national park’s most famous attraction. The “male” spring, known as Bintente, measures 12m in diameter and is set in a lush swampy clearing. The “female” spring Nyasimbi, meaning “the female ancestors”, is a boiling geyser (103°C) which spurts bubbling water and steam up to two meters high – the steam cloud can be seen from as far as 2km away. Local people used to cook their food in these boiling pools.

This 6km section of public road runs through one of the loveliest tracts of forest in Uganda and provides views of birds and monkeys high up in the forest canopy. Birding walks take place in Sempaya, as well as night hikes deep into the forest. In Ntandi, local Batwa dancers put on traditional performances for visitors. Another local attraction is the Mungiro Falls near the hot springs.

The 160km long Semliki River carries runoff from the Rwenzori Mountains to Lake Albert and the Nile, proving ancient geographers’ claims that the Nile flows (in part anyway) from a snow-capped mountain in the heart of Africa. Broad, muddy, forest fringed and home to hippos and crocodiles, the Semliki is a miniature version of the Congo River. Visitors can watch the river meander across the rift valley floor from roadside viewpoints and hike through the forest to its bird-rich banks.

In Uganda’s oldest reserve, tropical rainforest meets grassy savanna and the flat plains are punctuated by deep river valleys. The unique geography is reflected in the diversity of wildlife, which includes the forest mammals of Central Africa, key East African species and a variety of birdlife. Chimp tracking commences here.

The forest is home to 53 mammals of which 27 are large mammals. 11 species are endemic to the park including the pygmy antelope and two flying squirrel species. It is also home to the peculiar water chevrotain, known as the “fanged deer”. The park is home to forest elephant and buffalo which are smaller versions of their savannah-dwelling relatives. The forest is remarkably rich in primates including the chimpanzee, baboon, grey-cheeked mangabey, black-and-white colobus, Central African red colobus, blue, red-tailed, de Brazza’s, vervet, and Dent’s mona monkeys. Nocturnal primates include the potto and bushbaby. Hippos and crocodiles are common along the Semuliki River.

Birdlife is especially spectacular in Semuliki with 441 recorded species, representing 40% of Uganda’s total bird species and 66% (216) of the country’s forest bird species. The list is expanded by the riverine habitat and a fringe of grassland in the east of the park. There are numerous rarities; 46 Guinea-Congo biome species are found nowhere else in East Africa while another 35 can be seen in only two or three other places in Uganda. Five species are endemic to the Albertine Rift ecosystem. Species to look out for here include the Nkulengu Rail, Yellow-throated Cuckoo, Piping Hornbill, Red-billed Dwarf Hornbill, Black Dwarf Hornbill, White-crested Hornbill, Black-casqued Wattled Horbill, Red-rumped Tinkerbird, African Piculet, White-throated Blue Swallow, Yellow-throated Nicator, Leaf-love, Swamp Palm Bulbul, Lemon-bellied Crombec, Maxwell’s Black Weaver, Crested Malimbe, Red-bellied Malimbe, Blue-billed malimbe, Chestnut-breasted Negrofinch, Orange-cheeked Waxbill.

Birders who make it to Semliki will be rewarded with some of Africa’s best forest birding. Sempaya and Ntandi provide excellent viewing of the birds including the White-crested Hornbill, Red-billed Dwarf Hornbill, Piping Hornbill, Yellow-throated Nicator, Great blue and Ross’s Turacos. The area around Kirumia River is another top birding spot. The shoebill stork is regularly seen at close quarters on Lake Albert and forest walks are good for tracking water birds.

The Batwa’s hunter-gatherer lifestyle means they have always been dependent on Semliki forest for food, shelter, medicine and tools, though this is beginning to change as a result of interaction with other local communities. Tourism offers an alternative source of income for the Batwa, and gives them the opportunity to maintain and display their rich cultural history through music and dance performances at Ntandi. They also produce intricate handcrafts for sale. A boma, or cultural village, is currently being built so that the Batwa can demonstrate how they used to live in the forest – check back for more details.

Three tracks cross the savannah grassland of Toro Semliki Wildlife Reserve. Smaller forest and larger savannah elephants are regularly seen, along with buffalo, waterbuck, crocodile, warthog and Uganda kob. With luck, you may even see pygmy hippopotami, leopards and elusive bushbabies. Game drives in the Wildlife Reserve can take place in the morning, afternoon and at night; after dark, visitors may come across curious nocturnal species such as the white-tailed mongoose.

The 13km KirumiaTrail runs through the heart of the forest to the Semuliki River. This 8 hour round trip starts at 8am and is perfect for birders.

The 11km Red Monkey Track follows the park’s eastern border – a stronghold of the rare deBrazza’s monkey – to the Semliki River.

Along the 8km Sempaya Nature Trail, you can view the hot springs and primates. This 2-4 hour hike can take place in the morning or afternoon.

The hour-long trail to the outer, “male” spring leads through a patch of forest where red-tailed monkeys, grey-cheeked mangabeys and black-and-white colobus monkeys are common. A tree house en route provides an aerial view.

A 30-minute hike through palm forest from the main road leads to the inner, “female” spring, dominated by a boiling geyser. Eggs and matooke (green plantain) can be cooked in these boiling waters and enjoyed by hungry hikers!