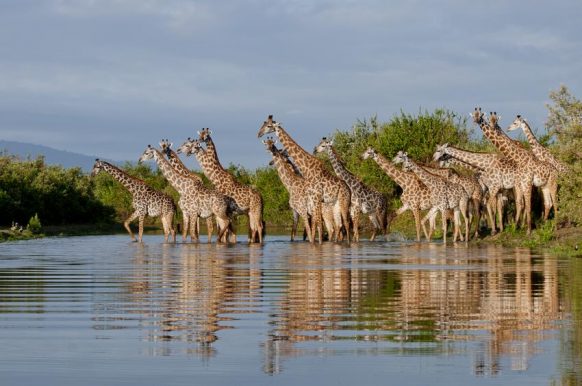 Standing as the largest game reserve in Africa, Selous is also the second largest conservation area in Africa sized at 50,000 square kilometers with a very large number of remarkable attractions. It is interesting approximated to be four (4) times bigger than the Serengeti. While in Tanzania, it is worth taking a safari to Selous as it is one of the most remote game reserves which implies that is it less visited so you will be able to enjoy a less crowded Tanzania Safari Experience. Because of its elaborate and unique beauty, the Selous has so many wild animals living within its vast lands; no wonder in 1982 UNESCO declared it a world heritage site.

Below are the top attractions within the Selous Game Reserve

River Rufiji which is the biggest river in Tanzania flow flows through the Selous reserve, and it makes an extensive network of swamps, water channels and small ‘lakes’. This consequently forms a diversity of water sources which attract large numbers of wild animals such as big herds of Elephants and antelopes especially in the dry season. This river is also popular for its thrilling boat rides which can be enjoyed while in Selous on a Tanzania safari. It is also worth mentioning that the mighty river Rufiji also splits the reserve into two major sectors which are the northern sector dedicated to photographic safaris and the southern sector splint into hunting blocks

The Selous is host to over 440 species of birds species and these can best be seen along the shores of river Rufiji and the lake shores. a large number of migratory birds flocks the reserve from the month of November to Aril which in fact is the best time for birding in Selous. some of the remarkable species here include: the White-backed night heron, Spur-winged lapwing, Palm-nut vulture, African wattled lapwing, Brown-necked Parrot, White-headed Lapwing, Black-winged stilt, Brown-headed parrot, White-fronted bee-eater, White-fronted plover, Pearl-spotted owlet, Pel’s fishing owl Rare, Pel’s fishing owl, African spoonbill, Broad-billed roller, the widespread White-headed vulture, African skimmer, Yellow-billed stork, Bohm’s bee-eater and many others

The Animals In Selous Game Reserve

When we analyze the numbers of different large mammals living in the Selous, I am sure you will agree with many that this is in fact one of the best destination to enjoy a wildlife Safari in Africa. The Selous is home to the largest concentration of elephants with approximately 110,000 individuals recorded, about 35,000 zebras, 40,000 hippos, 25,000 impalas, 150,000 buffalos and approximately 4,000 lions the highest concentration in Africa. In addition are: rhinos, brindled gnu, Nyasaland gnu, sable antelope, eland, greater kudu, waterbuck, hartebeest, giraffe, reedbuck, warthog, spotted hyena, lion, leopard and hunting dog.

Because wildlife viewing is among the key tourist activities in Selous, there are a variety of game viewing safari activities available in this reserve. A number of trips are offered by boat, vehicle or on foot. Boat safaris for example allow you to move gently on the rivers and water channels taking you through the birds and animal habitats offering you closer views of wildlife such as hippos and crocodiles. a number of lodges in addition offer guided nature walks for all those in the right age (usually 12 years) and these come with big chances of interfacing with big game such as buffaloes and elephants.

The best time of game viewing in the Selous is towards the end of the dry season as the game drives are rather very rewarding as many large mammals gather around the surviving water sources including the five lakes.

Sadly because of illegal activities like poaching a number of animal populations especially elephants were affected due to the high demand of ivory on the black-market during the 1970s and 80s.

The Unique Vegetation Of Selous

In general, the Selous game reserve is characterized by a unique vegetation cover as compare to the rest of Tanzania. Its vast lands are dominated by wooded savanna grasslands as well as a deciduous Miombo forest. On the other hand, the rocky outcrops, thick shrubs with thorns as well as grand water woodlands also comprise part of the Selous’ unique vegetation.

The Grave Of Fredrick Selous

Frederick Courtney Selous, a conservationist and early British explorer, was killed and buried in the Selous reserve in World War I, and it is after him that the Selous Game Reserve was named. You will be able to visit his grave stone found beneath a tamarind tree. He was Cecil John Rhodes’ right hand man in his operation to take over the present Zimbabwe country under the British Empire, and also in 1899 got a brief dishonor for talking against the war that the people of England had waged on the Boer Republics living in South Africa. During the First World War in the Selous, Fredrick Selous was made the Captain of the 25th-Royal-Fusiliers at 60 years of age, and in 1916 won a DSO. Because of his in-depth knowledge of these lands, he led the pursue of the German guerrilla army which was in control of southern Tanzania.

Unfortunately while battling in this bush war along River Rufiji’s banks against Schutztruppen a German colonialist, on the 4th January 1917, he was out numbered and shot by a German sniper in the head. close to his place of death, he was buried on the northern border of the Selous game reserve at a place called Beho.

Lake Tagalala is an oxbow lake, surrounded dying out trees that are normally drown especially during the rainy season when the water levels are high. As the dry season kicks in and most of the Selous becomes dry, Lake Tagalala attracts a large number of zebras, buffaloes, elephants, impalas and many other herbivores which consequently draw several predators like lions to prey on this great availability of prey. In addition, a very large number and diversity of bird species can also be seen within the shallows of this lake which makes it a good place for game drives and birding in Selous Game Reserve. A large number of holidaymakers that visit this lake on a Tanzania Safari normally take a refreshing deep in the hot water natural spring found close by while others choice to take a boat ride on the lake for game viewing and birding as others simply do the wildlife spotting in their safari vehicles.

The best time to visit Selous Game Reserve is from June to October which also ranks as the peak tourist season in Tanzania. When we talk about the Selous Tanzania Weather, we are basically going to analyze the seasonal weather patterns experienced in the Selous and how they affect this game reserve.

Being a classic dry park, the Selous has remarkable game viewing opportunities that gradually get even better in the later times of the dry season. The biggest crowds of animals are usually experienced in the best time of the year which is July to October; however, this does not mean that game viewing cannot be done during the rest of the year.

The large Selous game reserve experiences two main seasons: the dry season and the wet season as highlighted below

The Dry Season In Selous Reserve

From June to October, the Selous game reserve is experiencing the dry season with little or no rains. Wildlife is much easier to watch during the dry season, when the animals gather at water points and also at this time of the year, the vegetation is generally thinner. Wildlife viewing in Selous game reserve is therefore best during this time as is easier to view the animals since they gather around the waterholes and rivers.

The rains are very little and it is sunny most of the time. There are few mosquitoes during the dry season hence less chances of catching malaria. The humidity is low with less heat, however, because of the drought, there are lots of dusts and most places get quite crowded. A flight from Dar es Salaam takes about 45 minutes to the reserve landing at the several airstrips that are located at the different camps.

The tourist area around the Rufiji River gets rather crowded with holidaymakers who come to marvel at the large number of wild animals in this area.

The Wet Season In Selous Reserve

From November to May and December, the Selous game reserve is experiencing the wet season that bringing about fascinating scenery that is green with large amounts of rains and this is the low tourist season in Tanzania. The humidity is high and the temperatures are generally high which generates allot of heat.

In the low season months of March, April and May when the reserve is wettest, the prices of safaris to the Selous might be lowered in order to attract tourist, since the tourist crowds are less. Bird watching in the Selous is at its peak as the migratory birds are present which implies that this is the best time to enjoy a Tanzania Birding Tour. The roads are hard to travel as they become very muddy in this season. It is not good to view wildlife as compared to the dry season.

Most of the lodges are closed during the low season in the months of March, April and May when the reserve is experiencing the heaviest precipitation so it may be tricky to obtain a place to stay

January and February is considered to be the shoulder season. The animals move away from the feeding grounds that are fertile, thus the time when you have to choose your camp very attentively especially if you are interested in game viewing. At this time of the year, birding is very remarkable.