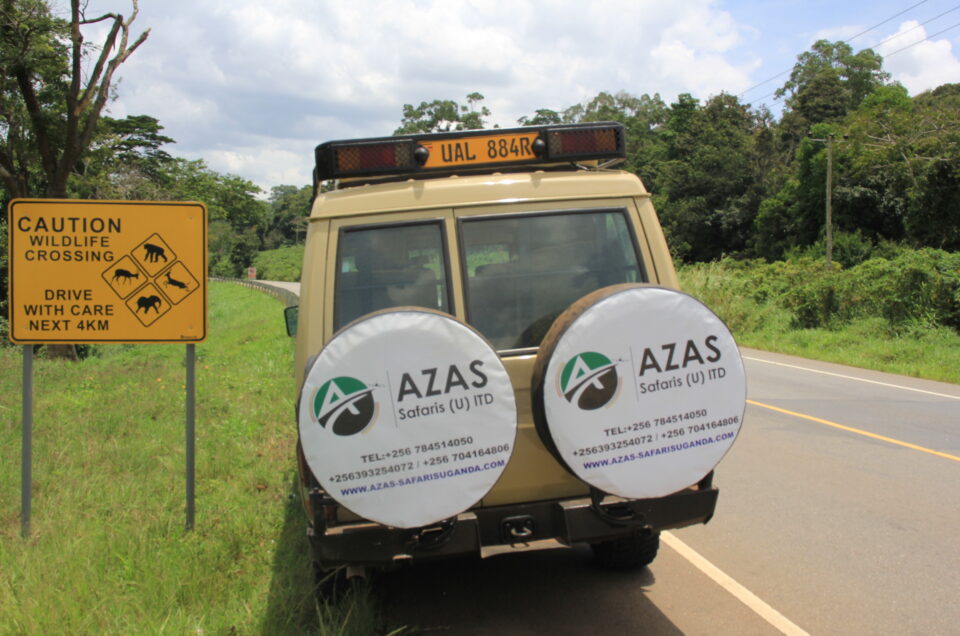 A Photographic safari in Uganda is a very unique experience. Abundant wildlife viewing, long days, different environments, changes of weather and variable Geography all offer special and excellent opportunities for a remarkable photography experience. Today many tourists engage in these safaris since it is one of the best ways to capture and at the same time keep the safari moments which you can share with your friends or family back home or for future referral.

Photographic safaris in the Pearl of Africa are for all kinds of Photographers whether Amateur or Professional Photographers, what is important is for you to have the best experience during your safari. There is a lot to capture while in Uganda, so your safari is organized basing on your personal interests.

Any passionate photographer should not miss the chance to capture the best photos of the Chimpanzees during a Chimpanzee trek or Gorillas on during Gorilla Habituation or on a Gorilla Trek, the climbing lions in Ishasha Sector and other picturesque areas like Lake Mutanda, the Crater lakes region, Lake Bunyonyi, River Nile, Murchison Falls National Park, Kidepo Valley National Park, Rwenzori Mountains, among others.

Although most photographic safaris include more of wildlife and geographical features, it is still possible to visit your other areas of interest whether they are historical, cultural, and religious sites. What is needed as you plan for a photography safari is dedication, preparation, patience and a guide who understands the exact spots you would position yourself to take best photos. Also hire a vehicle with enough space to accommodate the photography equipment.

Below we have listed for you some of the picturesque places in Uganda where you can have remarkable experiences during your photographic safari.

Every one planning a photographic safari cannot miss out on this Park because it has a lot to offer. Of all the Parks, this park is the biggest in Uganda covering 3,893km2 and was gazetted in 1952. It hosts the world’s strongest waterfall called the Murchison Falls, where water makes its way into the Devil’s Cauldron with a thunderous roar through an 8m wide gorge, therein creating a beautiful rainbow.

The park is divided into two section; the northern bank which is covered by savannah grasslands, riverine woodlands, and acacia trees and the southern bank mainly covered by forest and woodland patches, all these sections are great spots for photographers. 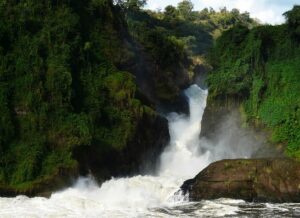 Photographers can take amazing wildlife photos of Lions, Buffaloes, Elephants, Warthogs, Antelopes, Nile Crocodiles, Hippos, Leopards and various bird species. While in the park, one can go for hot air balloon safaris, game drives, hiking, nature walks, birding, launch cruises to the delta or the bottom of the falls. Also this park also offers Night game drives. Whatever activity you opt for, you are sure to have fun and above all take the best photos.

This Park has been used in filming movies such as the African Queen film in 1951 starring Humphrey Bogart, also famous people have visited this park including Theodore Roosevelt, Winston Churchill a number of British Royals.

Kibale Forest is home to over 13 primate species including the L’Hoest’s and Red-tailed monkeys, Baboons, Red colobus, Bush Babies, Blue Monkeys, Mangabeys, Pottos, and the Black & White Colobus monkey, also including over 1500 Chimpanzees. It is situated in the Western region of Uganda. It also hosts about 370 bird species, about 70 mammals, a number of butterflies as well as different tree and plant species. Other wild animals found in this forest include buffaloes, duikers, elephants, antelopes, bush pigs, otters and giant forest hogs among others. 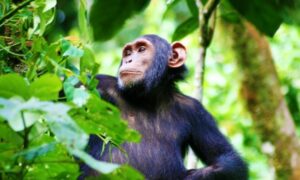 The park is made up of beautiful tracts of tropical forest, swamp vegetation, grasslands hence makes it more photogenic. Photographers can engage in different activities such as chimpanzee tracking or habituation, nature walks, birding, research among others. Also around the park are scenic carter lakes which can be reached on foot and they are indeed so picturesque.

Though the less visited National Park in the country, it still ranked among Africa’s most beautiful National Parks by CNN. It is found in the North-Eastern part of Uganda and choosing this park among the place to visit during your photography safari would reward you with the amazing views of the Narus and Kidepo valleys, the beautiful culture and history of the Ik people an indigenous tribe and the shadows of the Morungole Mountain.

Apart from the breathtaking landscapes, the park hosts various wildlife species such as over 5,000 buffaloes, lions, herds of elephants and if you are lucky sometimes you can spot the cheetah and the ostrich.

The location of this park is usually off-putting for many travellers but spending time and money to get to the park is rewarding as you discover what many call the “True African Wilderness”.  You can get to this park by road which is approximately a 12 hour drive or be transferred in a fairly expensive charter flight.

This park was gazetted in 1991 and was recognized as a World UNESCO Site in 1994. It is located in the South-western part of Uganda and its misty hills are covered with one of the most diverse and oldest rain forests which is over 25,000 years old. It is home to over 400 Mountain gorillas which is half of the world’s remaining population and the main activity done here is Gorilla trekking and Gorilla Habituation. 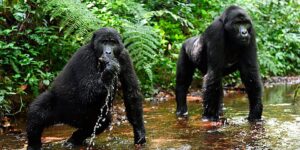 It also harbors over 350 bird species, 120 mammals, 27 frog species, 202 butterfly species, 346 tree species, and 400 plant species. So whatever your interests are, everything is at your disposal to take photos. The park also has spectacular waterfalls not forgetting the amazing Batwa tribe which has a rich culture with a lot to learn and engage in. in other word, Bwindi cannot miss out among your options for the photographic safaris.

Any photographer should not miss out on visiting this Park. The Park is one of the country’s most visited attractions with diverse ecosystems such as the spectacular lakes, extensive savanna, humid forests, and wetlands which make it a great place for photography. It is home to over 600 bird species, 10 species of primates including the Chimpanzees and the Big game such as lions, buffaloes, elephants, forest hogs, leopards, hippos, antelopes, among others.

The park also offers spectacular views of the Rwenzori Mountains, the rolling hills, enormous carter lakes, the Kazinga Channel which has amazing banks covered with elephants, buffaloes and hippos plus the outstanding Ishasha plains which harbor Climbing Lions. This park also gives chance to photographic visitors to visit different local communities which have a mesmerizing cultural history, they can take part in any of the activities such as dance, music, and storytelling.

Originally, Semuliki was a Game Reserve in 1932 but as time went on, in 1993 it was established as a National Park. This park is mainly dominated by the extension of the Congo Basin’s Ituri forest which is said to be between 13,000 to 18,000 years old. It is home to over 441 bird species and 53 species of mammals.

The park stretches across the Semuliki Valley floor on the distant western part of the Rwenzori region. The Semuliki Valley comprises of a number of features including the Sempaya Male and Female Hot springs which are one of the greatest photogenic features of the Park. River Semuliki is also a beautiful small version of the Congo River. 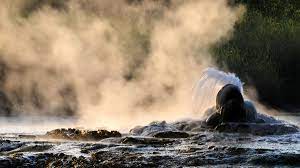 As you move in the park to get more photos you can come across different wildlife species such as the buffaloes, crocodiles, forest elephants, chimpanzees, hippos, different types of monkeys, bay duikers, and target rats among others. You can also visit the local communities around which includes the Batwa pygmies which a great indigenous community with great history and culture.

This is the country’s smallest National Park with breathtaking picturesque landscapes which can be well experienced while on a game drive or a nature walk or a boat cruise or even on a horse ride. The Park is a 4 hours drive away from Kampala, meaning it is one of the easily accessible photogenic attractions in the country. 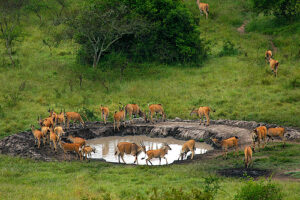 The savannah plains, rolling hills, the beautiful lakes, and the metamorphic rocks that are about 500 million years old are not to miss out. The park also hosts over 350 bird species and you will be sure to spot numerous wildlife scattered all over the park such as  Giraffes, Elands, Buffaloes, Zebras, Oribis, Leopards, Hippos, Topis, Reedbucks, Defassa Water bucks and many more.

This is said to be the country’s deepest lake ranging from 44metres to 900metres in depth. It is situated in the southwestern region and is one of the most photogenic lakes in the country. It is a fresh water lake with an amazing scenery including the surrounding terraced hills not forgetting the most remarkable 29 islands, some of the islands can be accessed by a motorized canoe and be sure to hear the most amazing stories about them. 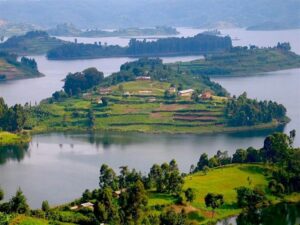 Lake Bunyonyi can be accessed from Kampala on an approximately a 7hour drive or through Rwanda on a 2hours drive. Take more photos like you wish, if you are a good swimmer you can enjoy it here because the lake is Bilharzia free.

It is said to be one of Uganda’s most beautiful lakes, it is a fresh water lake surrounded by picturesque Mountain landscapes including the spectacular background of peaks of the Virungas. It is located in the Southwestern part in the southern region of Bwindi. Any photographer cannot miss out the experience at this lake. 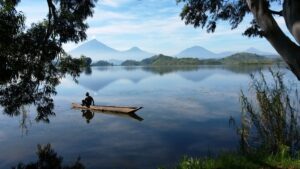 Well we can go and on because there is a lot that Uganda has to offer to photographers, some areas that have not been mentioned above include; Lake Mulehe, Mt. Mgahinga National Park, the Rwenzori Mountains, Sipi Falls, Mirambi and Katinda Crater Lakes, Lake Victoria, Lake Albert, Pian Upe, Mabira Forest, the source of the Nile and many more.