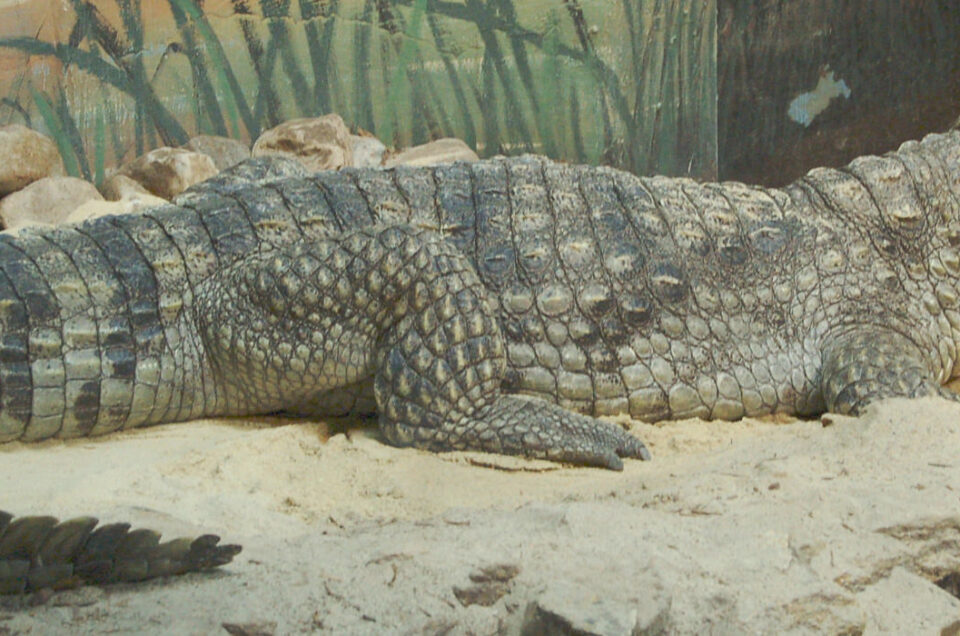 Nile crocodile (Crocodylus niloticus) is a large crocodile native to freshwater habitats in Africa, where it is present in 26 countries. Due to its widespread occurrence and stable population trend, it has been listed as Least Concern on the IUCN Red List since 1996.

It is widely distributed throughout sub-Saharan Africa, occurring mostly in the central, eastern, and southern regions of the continent, and lives in different types of aquatic environments such as lakes, rivers, swamps, and marshlands. Although capable of living in saline environments, this species is rarely found in saltwater, but occasionally inhabits deltas and brackish lakes.

The range of this species once stretched northward throughout the Nile, as far north as the Nile delta. On average, the adult male Nile crocodile is between 3.5 and 5 m (11.5 and 16.4 ft) in length and weighs 225 to 750 kg (500 to 1,650 lb). However, specimens exceeding 6.1 m (20 ft) in length and weighing up to 1,089 kg (2,400 lb) have been recorded. It is the largest freshwater predator in Africa, and may be considered the second-largest extant reptile in the world, after the saltwater crocodile (Crocodylus porosus)

The diet of the Nile crocodile is mainly fish, but it will attack almost anything unfortunate enough to cross its path, including zebras, small hippos, porcupines, birds, and other crocodiles. It will also scavenge carrion, and can eat up to half its body weight at a feeding.

One unusual characteristic of this fearsome predator is its caring nature as a parent. Where most reptiles lay their eggs and move on, mother and father Nile crocodile ferociously guard their nests until the eggs hatch, and they will often roll the eggs gently in their mouths to help hatching babies emerge. while on a Uganda safari, a number of crocodiles can be seen along the Albert Nile in Murchison falls national park , Queen Elizabeth and Lake Mburo National parks.

The Nile crocodile has a somewhat deserved reputation as a vicious man-eater. The proximity of much of its habitat to people means run-ins are frequent. And its virtually indiscriminate diet means a villager washing clothes by a riverbank might look just as tasty as a migrating wildebeest.

Firm numbers are sketchy, but estimates are that up to 200 people may die each year in the jaws of a Nile crocodile. in Uganda , most cases of crocodile attacks are reported in fishing villages of Queen Elizabeth National park.

Discover the Nile crocodiles with us.