About The Ngamba island 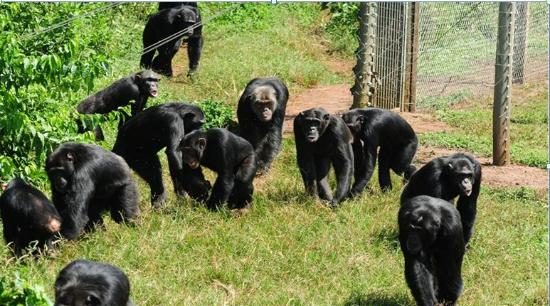 Cut off from the mainland, Ngamba Island is a world away from the rest of Uganda. Perched in the waters of Lake Victoria, this lush outcrop, a short boat journey from Entebbe, is an idly and a haven for mankind’s closest relation.

‘When corals die off, we die off’Chimpanzees face exploitation by humans, whether through deforestation or traffickers, but Ngamba’s semi-tropical rainforest has become a happy stomping ground for the primate.

Overseen by the Chimpanzee Trust, the Ngamba Island Chimpanzee Sanctuary’s approach helps the apes stay fed and watered, but in the daytime they’re free to roam and claim the island as their own.

But together they’ve forged a society on Ngamba, one growing in depth and complexity across nearly 20 years.

The island has become the home some humans have deprived them of. Ngamba’s 49 chimpanzees are part of an estimated 200,000 left in Africa — a fifth of the population that existed a century ago, says the trust.

“Chimpanzee are classified (as an) endangered species … there’s a real need to protect the population,” says executive director Lilly Ajarova.

What a hunter-gatherer diet does to the body in just three days”Each chimpanzee here has its own unique story,” says Joshua Rukundo, conservation programs director. “It’s interesting (getting) to know these individuals and their stories.

“Aykuru was rescued by a police officer from the arms of her dead mother, and is the best of the group at using tools. Cho came to Ngamba with her baby. Sunday is 33 years old and has been a resident since 1998, although in 1999 he nearly escaped aboard a boat commandeered from a group of curious fishermen.

The Chimpanzee Trust constantly gathers information on the island’s residents, working alongside the Max Planck Institute in Germany for the past 11 years.

Chimps can live up to 60 years, so it’s a long-term research project.”Our whole team is interested in the evolution of cognition,” says Johanna Eckert, a member of the department of evolutionary anthropology at the institute.

Bringing orphaned chimps back into the forest normally live in highly stratified groups.

Newly introduced males in particular are treated with a healthy dose of skepticism. It can take up to two years for a new chimp to be fully accepted, depending on whether the group thinks the newcomer might have designs on becoming the alpha.

During your visit you will experience: chimpanzee viewing & feeding, shopping at the island gift shop, bird watching, experiencing other wildlife encounters, swimming on the equator, visiting a neighboring fishing village or simply sunbathing and relaxing.

Day visitors can also ‘get their hands dirty’ by being part of the feeding team. This is an opportunity for you to feed the chimpanzees from the platform.

On top of being able to feed your favorite chimp, you will also watch as the chimps excitedly try and gain your attention to receive food (this activity is subject to management exclusion and policies).

Additionally, you can enjoy our fresh lunches prepared on-site. Please note, packed lunches and drinks to the island are prohibited, prompted by the difficulty of controlling litter associated with the personal items.

The ban seeks to enforce Chimpanzee Trust’s Environmental Management Policy and System, in place since the founding of Ngamba Island Sanctuary in 1998.

About The Ngamba island
Book Now