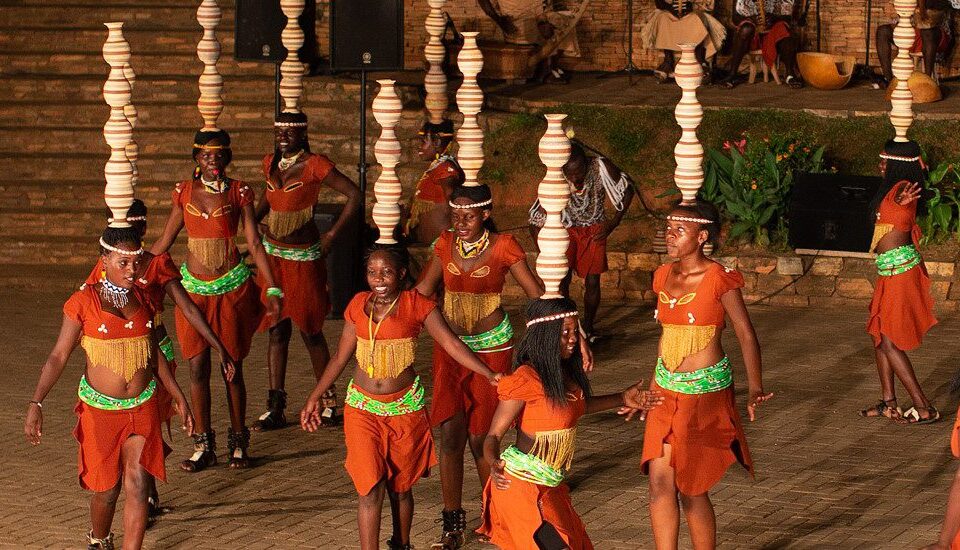 The flute was chosen as a symbol of beauty as it produced such beautiful and irresistible music which can be manipulated to express a range of emotions; from sorrow to joy and from love to loneliness.

It also symbolises universal unity, all peoples of the world have a flute in their cultures.

The flute is like the blood that flows in our bodies no matter our external difference. The Ndere Troupe prides itself on emphasizing commonalities and celebrating the rich differences.

The Ndere Troupe is a cultural development that was founded in 1986 by Rawangyezi Stephen.

Historically in Africa, written words did not exist therefore Africa’s cultural history literature, knowledge and wisdom were recorded and passed on to succeeding generations through the medium of performing arts, music, dance, story telling and poetry.

Pride in education, in efforts to salvage and conserve African heritage, the Ndere Troupe performs a repertoire of more than 40 authentic Ugandan dances and songs accompanied by various indigenous percussive, stringed and wind instruments.

The multi-award winning Ndere Troupe has been gracing stages for almost 25 years with high quality performances that have resulted in worldwide appreciation and fame.

Ndere Troupe has also made memorable experiences for countless people and organisations by performing at different milestones in their lives.

Ndere Troupe has performed at graduations, weddings, anniversaries, dinners, launches, conferences, expositions, festivals, opening ceremonies and state functions to name but a few.
With over 60 artists, Ndere Troupe is poised to continue shaping Ugandan culture and performance as they continue to take it to the next level.