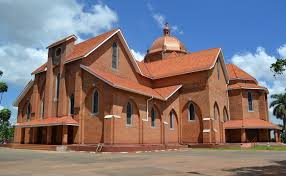 The cathedral is located on Namirembe Hill, in Lubaga Division, in Kampala and is bordered by Makerere to the north-east, Old Kampala to the east, Mengo to the south-east, Lubaga to the south-west, Lungujja to the west, the Kasubi Tombs to the north-west, and Nankulabye to the north. The distance, by road, from the central business district of Kampala to Namirembe is approximately 1 mile (1.6 km)

Namirembe Hill has been the location of the main Anglican place of worship in Buganda since Bishop Alfred Tucker established the offices of the Diocese of Eastern Equatorial Africa in 1890. Tragedy befell the first four church structures: