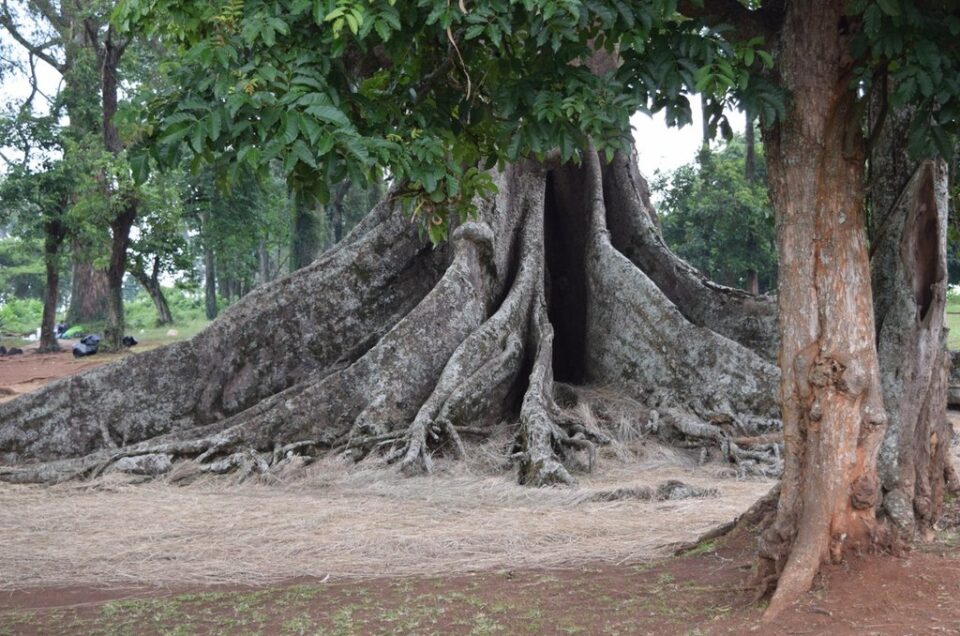 The Nakayima still holds its records among the oldest and the most ancient trees in Uganda. Situated in Mubende District about 149km from Kampala the capital city along the Kampala – Fort portal Highway after Mityana District and its just 4 km from Mubende town.

The tree stands at about 40meters high and it’s believed to be 400 – 500 years of age and existence. The Nakayima tree derives its name or was named after the wife of the Bachwezi ruler Known as King Ndahura who was believed to be roaming around the tree and suddenly disappeared in the tree thus its name Nakayima .

The Bachwezi people were believed to be Demi gods in that in the way they just disappeared, they didn’t just die natural that’s according to history.

The Nakyima traditionally was not only a care taker of the tree, but she was also regularly possessed by the spirit of Ndahura, on which occasions her extremities became covered in smallpox marks for several days.

Her supernatural powers are said to have included the ability to cure and prevent small pox and other fatal diseases, and to help infertile women bear children.

The Nakayima was receiving regular tributes from the kings of both of these polities, and also overseeing ritual ceremonies that involved the sacrifice of cows, sheep and more occasionally teenage boys and girls.

If the oral tradition is to be believed, the Nakayima lineage was for full four centuries an acknowledged spiritual figured to both the rulers and the peasantry of Buganda and Bunyoro.

Its end was remarkably abrupt. The first intimation of its demise in 1888, when the religious conflict that rocked Buganda forced the incumbent nakayima, Nyanjara, to flee from Mubende.

When she returned a year later, all but one of the seven huts traditionally inhabited by the Nakayima razed, while the graves of her predecessors had been defaced, and her sacred drums had vanished.

This attack had no immediate impact on the Nakayima’s influence in Bunyoro, then relatively un exposed to exotic religions-indeed, king Kabalega made a special visit to Mubende to pay Nyanjara tribute in 1899.

As early as 1902, the political autonomy that had characterized the once- feared and revered spiritual community led by the Nakayima was curtailed when Mubende Hill was placed under the indirect colonial rule of a Muaganda Saza chief appointed by the British administration at Kakumiro.

Nyanjara retired to Bugogo, where she died in 1907, the first Nakayima not to be interred in the traditional cemetery near the sacred tree, through eventually she was buried in isolation at the base of Mubende Hill.

Her fantastic regalia, confiscated by the authorities now forms one of the most impressive displays in the National museum in Kampala-together with two large and ancient pots.

The Nakayima tree is one of the historical places to visit and it can be combined with your visit to kibale forest national park.