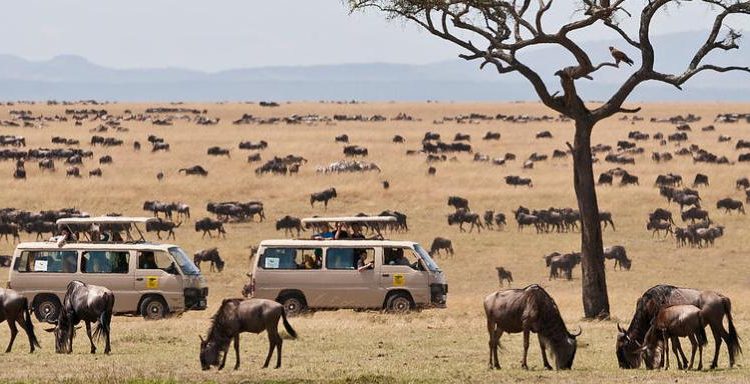 Things to do in Maasai Mara National Reserve Kenya

The Things to do in Maasai Mara National Reserve make it one of the most visited in Africa. Maasai Mara National Reserve is found in Southwestern Kenya and close to the Tanzanian border. The reserve covers an area of about 1510 square kilometers. When combined with the neighboring Serengeti National Park of Tanzania, the two form arguably the best place to spot wildlife in the world.

The Maasai Mara National Reserve is home to over 95 species of mammals and 570 of birds. Between June to November, the Maasai Mara welcomes over 1.5 million wildebeest, Zebras and Thompson gazelle in arguably the largest animal migration on earth.

The animals follow the rains from Tanzania’s Serengeti National Park to the Maasai Mara National Reserve and back covering an area of about 1,800 miles. This movement draws thousands of tourists to the reserve every year.

The greater Masai Mara ecosystem consists of the Reserve, Mara Triangle and private Maasai Conservancies. The Mara Triangle is separated from the main reserve by the Mara River. It is less visited and because of that less crowded but with all the big 5 mammals.

The Masai Conservancies are large chunks of land surrounding the Masai Mara National Reserve. They are owned and managed by the Masai elders with their own share of wildlife.

Ownership of part of the Mara Eco-system has allowed the Maasai people to preserve their identity and relationship with the overall landscape. You might find our 2 days Masai Mara tour package interesting.

Things to do in Maasai Mara National Reserve

The Maasai Mara National Reserve has been listed several times as one of the world’s Natural Wonders. It is one of the best places to spot wildlife in Africa and each year, hundreds of thousands of tourists visit to see some of Africa’s famous mammals.

Morning and Afternoon game drives: As noted earlier, the Masai Mara is one of the best places for game viewing in Africa. The Mara Eco-system offers opportunities not only to spot Africa’s famous wildlife but also to take great photos and videos.

Game drives occur throughout the year and are arranged in areas with the highest concentration of wildlife. A typical game drive is carried out in standard tour vehicles with a retractable roof and can start in the morning or afternoon.

Regardless of whether you go for the morning or afternoon session, expect to see all the big 5 mammals, zebras, giraffe, hyenas, elands and gazelles. Cheetahs are in plenty and well adapted to the Mara but you can also see black rhinos.

The Maasai Mara National Reserve is the best place to observe cheetahs in Africa. The highlight of any game drive is observing one of the big cats pull down a zebra or wildebeest. After the game drive, an arrangement can be made to have picnic lunch in the middle of the African wilderness.

Night game drives provide an amazing opportunity to observe leopards, lions and hyenas tracking their prey. You can also get to see nocturnal mammals and birds.

Herbivores mammals remain alert and on tension in the night because they have to be alert for potential predators. Night game drives can only be done in the private Conservancies and with the help of Guides who know where to find the animals.

Birding: With over 500 species of birds, the Maasai Mara National Reserve is a birders paradise. You can look out for giant ostriches or check out the birds of prey like vultures. Smaller birds can also be seen nesting on the thickets or edges of escarpments.

On a typical birding excursion, you will be looking out for ducks, egrets, geese, herons, ostriches, hornbills, pelicans, spoonbills and storks. Apart from ostriches, the most interesting for ordinary tourists are the martial eagles and vultures.

Birding is led by very experienced and knowledgeable ornithologists/naturalists. These birding guides know all the different species of birds, plants and wildlife that you will encounter.

The Great Wildebeest Migration: Between June and November, the Masai Mara is host to one of the greatest wildlife spectacles in the world. Over 1.5 million wildebeest, Thompson’s Gazelles and Zebras cross the Mara river from the Serengeti in search of greener grass.

They encounter many challenges along the way. Apart from stalking predators, the migrating animals have to cross the crocodile infested Mara river where thousands drown or get eaten by crocodiles.

Those who cross the river have to contend with the Africa’s big predators. The scale of the migration is so large that it can be observed from space. Tourists visit to witness the great concentration of animals, the calving season, the battle between predator and prey.

These walking safaris offer tourists opportunities to spot birds, wildlife and the savanna on foot. It is the best way to appreciate the sheer beauty and panoramic views of the reserve.

Nature walks also allow tourists to get close to the surroundings and pristine wilderness in a way that is not possible with game drives. By getting close to nature, you get to appreciate it even more. Nature walks are more suitable in the private conservancies bordering the main reserve and are led by very experienced Maasai Guides or armed Rangers.

The walks are conducted in areas that are less frequented by predators and the bigger mammals. The Guides will teach you how to track mammals but also let you know what to do in case you meet any dangerous ones.

Horseback safaris: This particular activity is arranged in the conservancies and not within the main reserve itself. Participants are taken deep into the Mara on the back of a horse to view antelopes, leopards, wildebeest, hartebeests, giraffes, elephants, leopards and lions.

It is the most ecological way to tour the reserve without emitting sounds and fumes. This particular activity is led by park Rangers, owners of the conservancies or local Maasai Guides.

Hot Air Balloon Safari: If viewing game using a 4×4 vehicle is great then getting an aerial view of the vast Mara plains will take your breath away – especially if you do it during the great migration.

The hot air balloon route follows the Mara river allowing you to get an aerial view of the forests, birds and aquatic mammals before going deep into the savannah for more stunning views of the landscape. The activity lasts for one hour and ends with a picnic lunch/breakfasts with champagne on the savanna plains.

All participants are given certificates. Hot Air balloon safaris are excellent for families and couples on a honeymoon. It also allows participants to take great photos of the reserve.

Sundowners and Bush breakfast/dinner: If you choose to spend your honeymoon in the Maasai Mara game reserve, this is one thing you shouldn’t miss out on. Your hotel can arrange for a mobile dinning in the middle of the savanna with meals, drinks and wines.

There is nothing better than watching the beautiful sunset in the wilderness and in the arms of your partner.

Camping and Photographic safaris: If you love camping during your free time, then you will enjoy your time in the Masai Mara National Reserve. The experience will be different because you will be sleeping in the middle of the African wilderness and wild animals not far away.

There are many campsites within the Maasai Mara National Reserve. Most are public but there are also private ones with facilities like kitchens and toilets.

Some even have pools where you can relax with friends and family. What about photography? The Maasai Mara National Reserve is known for its amazing landscape, wildlife and flora. Some of the best wildlife photographers have visited the reserve just to capture its natural beauty and wildlife.

You don’t have to be a professional photography to go for a photographic safari. Anyone with a good camera and love for photography can take part in the activity.

Maasai Cultural Encounter: The Mara not only offers great wildlife experiences but also memorable cultural encounters in Tanzania. The Maasai tribesmen are one of Africa’s most intriguing ethnic groups. They are known for their colorful dresses and height.

The Maasai live in Kenya and Tanzania. Interestingly, the Maasai only migrated to Kenya 200 years ago. They are believed to have originated from Sudan. The Masai believe that all cattle in the world at one point belonged to their ancestors.

Any that is not with them was stolen from them. Before governments took action, the Maasai would raid neighboring communities to reclaim their lost cattle in what is known as cattle rustling.

The Masai have a distinct dress code and keep domestic animals as a traditional. Most have embraced tourism and the opportunities that come with it. In fact, many of the Guides in the reserve are from the Maasai tribe.

A visit to one of the Maasai Bomas is highly recommended especially if you are traveling with children. The children will be fascinated by the Masai lifestyle, culture and traditions.

While with the Masai, you can learn how to milk goats, build houses using local material (mud, grass, trees and dung) and use traditional hunting tools. After the cultural encounter and entertainment (songs and dances), you can also visit one of the artisan shops for souvenir.

The Mara River: The Mara river originates from the Kenyan highlands and drains into Lake Victoria. It provides water to animals in the reserve and is where the wildebeest cross as they migrate from the Serengeti National Park to the Maasai Mara National Reserve.

The Mara river grows in size during the wet season and has some of the largest Nile crocodiles in Africa. Most game drives in the Masai Mara National Reserve end in the river because it attracts a lot of birds, crocodiles and hippos.

In order to see and enjoy all that the reserve has to offer, you need at least 12 hours. This implies that you probably have to set aside 3 days just for a safari in Masai Mara National Reserve if we are to also consider the time spend driving to and from the reserve.

If you wish to have a more private safari and avoid the crowds, you should visit when the migration is beginning or about to end. If you are not interested in the great migration but only want to see the Big 5 in one place, then you should plan to visit in the low season. The big 5 mammals do not migrate and it is a mistake to think the Mara is only worth visiting during the migration period.

In order to reach the reserve, you need to endure a 4-hour journey from Nairobi and for 270 km by road. If traveling for longs hours by road is not your thing, you can choose to charter a plane but it would cost more. Most tourists book their safari through a reliable tour operator but one can get a public bus from Nairobi to Narok county. From Narok, there are several Matatus taking people up to the Sekanani Gate.