Langi People and their Culture

Lango language is a Luo language, a sub-group of the Nilo-Saharan languages, and mutually intelligible with Acholi and Kumam, and related to other Luo languages of Uganda and Kenya.

History of the Langi

The Langi tribal symbol is the rhino. Langi speak a Western Nilotic (Luo) language like their northern Acholi and Alur neighbors, but share many cultural characteristics with their Ateker (Eastern Nilotic) neighbors to the east.

Many scholars and anthropologists assert that they are part of a group that migrated from Ethiopia around 1600 A.D. and split into two groups, with one groups moving to present day Kenya to form the Kalenjin group and Maasai cluster. The other groups, called Ateker, migrated westwards and entered Uganda from the north-east. Ateker further split into four groups to form the Karamojong, Iteso, Kumam and Langi. The Langi migrated further to the west, and there they encountered the Acholi, who they pushed northwards from the northern part of Lake Kyoga. Through prolonged interaction with the Acholi, Langi lost Ateker language and took up Luo spoken by their Acholi neighbors. Many Langi identify with the Luo, refuting the theory that they are Ateker.

Historical migration
The Langi people, are the final group westwards, of migration from Abyssinia (Ethiopia) which dates back to 1600AD. According to tradition, the Jie now known as the Karamojong, are said to have migrated from an area known as Ararat in Abyssinia between 1600 and 1700AD as a single group which was then known as the Jie, before using the phrase; “Ekar ngimojong” meaning the old can walk no farther; which eventually gave them the name Karamojong.

A second group known as the Toposa moved straight forward and settled in an area within the territory of the present day Sudan. The third group the Dodoth settled at Apule in the northern part of the territory now known as karamoja. The main group moved southwards. On reaching the territory now occupied by the Jie, the group are reported to have fragmented into three groups.

The Jie, remained where they were. The three groups which emerged, were said to be the Pian, Bokora,and the Matheniko. These three groups moved farther southwards and the third group from the three went westwards and formed the Iteso, Kumam, and the Langi.

It was this last groups, the Pian, Matheniko, and the Bokora, who travelled the farthest who are said to have used the phrase “Ekar ingmojong”,” meaning the old can walk no farther”, from which the name now known as the Karamojong derived. The Pian, the Bokora and the Matheniko still live within the territory now known as Karamoja.

But the Iteso, though linguistically intelligible with their neighbouring ancestor, the (Karamojong) and share many traditional practices, now live in a separate territory, known as Teso (Soroti).

The Kumam, the smallest of the entire groups, settled in a small area known as Kaberamaido located between the Langi and the Iteso territories. Kumam people speaks Luo oriented dialect which can be understood by the neighbouring Langi people with the least amount of effort. But they still use some words from the Iteso.

The Langi moved farther west and encountered the Luo whom they pushed northwards and finally settled in the central area of the present day Uganda, along the Nile tributory: Lake Kyoga and Lake Kwania in an area now known as Lira and Apac. The Langi encounters with the Luo are recorded in a rare prehistoric Acholi war song known as “Otole”. 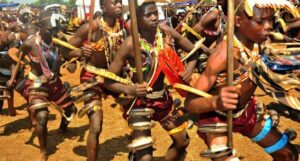 Political set up
Lango people had a government before British rule. It consisted of Won Nyaci (Paramount Chief), Twon Lwak (Military Leader), Awitong (Supreme Clan Chief), Rwot (Chief), Won Paco (Head of Homesteads), and Awi-Otem (Head of Family Lineage). The British government was aware of this and used the counsel of these chiefs when they wanted something done. In Lango, there was no hereditary king or supreme chief as practiced in Buganda or Bunyoro. The Lango government system was through elected clan chiefs with authority over the people of their clans. Chiefs were hereditary in some clans, so when a clan chief died, elders from the clan would choose one of his sons to succeed him.

Military
Driberg described Lango people as “brave and venturesome warriors who have won fear and respect of their neighbors…not being idle witnesses to watching of the misfortunes of their neighbors…treating facts of life with no sense of false modesty…” (pg.68). The Lango army was united under one military leader chosen from available men, and all had to agree to be led by him. These military leaders would lead the Lango army against other groups. Their authority ended when the war was over, and they all returned to their clans and resumed their daily occupation and were not entitled to any special benefits. Famous military leaders were Ongora Okubal who brought Lango to their present land, Opyene Nyakonyolo who succeeded Ongora Okubal and was followed by Arim Oroba, and Agoro Abwango. Agoro Abwango led his men to fight the Banyoro and was killed in Bunyoro, (Kihangire, p.22).

Education
Pre-colonial education was both formal and informal. Children were taught by their mother or siblings morality and how to address their relatives and respect other people. When they got older, boys were taught by their father or male relatives, and girls by their mother or female relatives. Games, folk stories, myths, proverbs, and riddles played a very important role in Lango education. In addition to mimicking adults, children games fostered a sense of domestic responsibility. The proverbs contain moral and social maxims, and riddles stimulate the activity of the mind.