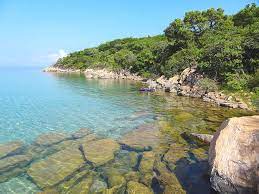 Lake Tanganyika, second largest of the lakes of eastern Africa. It is the longest freshwater lake in the world (410 miles [660 km]) and the second deepest (4,710 feet [1,436 metres]) after Lake Baikal in Russia. 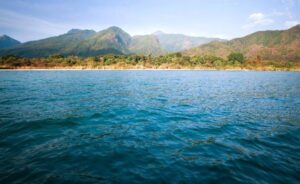 It occupies the southern end of the Western Rift Valley, and for most of its length the land rises steeply from its shores.

Its waters tend to be brackish. Though fed by a number of rivers, the lake is not the centre of an extensive drainage area.

The largest rivers discharging into the lake are the Malagarasi, the Ruzizi, and the Kalambo, which has one of the highest waterfalls in the world (704 feet [215 metres]; see Kalambo Falls). Its outlet is the Lukuga River, which flows into the Lualaba River.

Lake Tanganyika is situated on the line dividing the floral regions of eastern and western Africa, and oil palms, which are characteristic of the flora of western Africa, grow along the lake’s shores.

Rice and subsistence crops are grown along the shores, and fishing is of some significance. Hippopotamuses and crocodiles abound, and the bird life is varied.

International Waters
Where would you travel to reach the world’s second deepest lake? What is the lowest body of water on Earth? Test the depth of your knowledge with this quiz.

Many of the numerous peoples (predominantly Bantu-speaking) living on the lake’s eastern shores trace their origins to areas in the Congo River basin.

The lake was first visited by Europeans in 1858, when the British explorers Sir Richard Burton and John Hanning Speke reached Ujiji, on the lake’s eastern shore, in their quest for the source of the Nile River.

In 1871 Henry (later Sir Henry) Morton Stanley “found” David Livingstone at Ujiji. Important ports situated along Lake Tanganyika are Bujumbura, the capital of Burundi, Kalema in the DRC, Mpulungu in Zambia, and Ujiji and Kigoma in Tanzania.