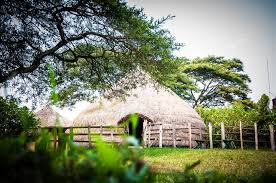 Karambi Royal Tombs are one of the most treasured cultural sites within Toro Kingdom, found at approximately 4 kilometres south of Fort Portal Town along the Fort portal-Kasese Highway, making it a serene place for an excursion. From outside it looks like an ordinary place but once you enter inside, you will discover a lot of interesting facts about the Toro kings.

Toro Kingdom was established in the early 19th century when then Prince Kaboyo, son of Bunyoro’s former King-Omukama Kyebambe rebelled against his father. Karambi Royal Tombs is among the most valued sites within Toro Kingdom, western Uganda because it is a burial place for the Kingdom’s three former Kings (Abakama)-Omukama Daudi Kyebambe, Omukama George Kamurasi Rukidi III and Omukama Kaboyo II, with each of them having separate thrones/tombs as well as other Royal family members.

Although the site was abandoned for many years, Tooro Kingdom recently unveiled plans to rehabilitate the Royal Tombs and structure them into modern tourist facility that will shelter the Museum and these include a tour and travel company and swimming pool that enable the site to generate more money so make sure to explore these Royal Tombs to learn more about this western Uganda.