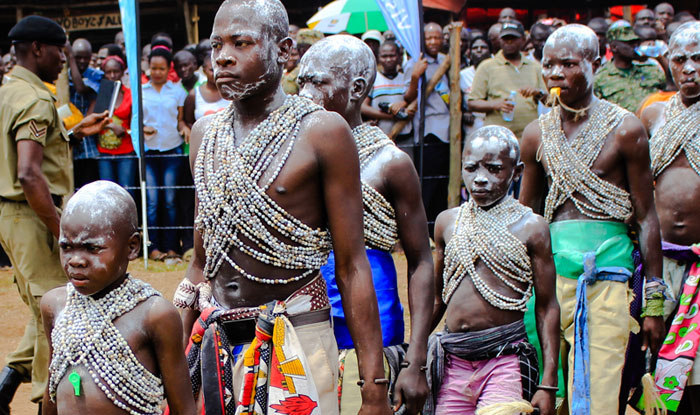 Along the slopes of Mount Elgon and Sipi falls is where you find the jolly tribe of the Bamasaaba. They are believed to be agriculturalists and carry out their activities on the small scale plots.

The Imbalu circumcision ceremonies majorly practiced by the Bamasaba people of Eastern Uganda and are practiced during the even-numbered years in August and December.

Its the changes occur in the adolescent stage

Boys and males between 16-25 years of age are considered capable to be initiated into men and this is a common practice in the Eastern districts of Sironko, Mbale and Manafwa among others.

In the Bamasaba culture, a boy who has passed the age of 25 years and is not yet circumcised is considered to be half a man so those who are almost going to be circumcised announce in May and June and wait for preparations that always take place in August.

If planning safari in Uganda, these could be a great opportunity for you to discover the true culture in Africa

Timing of the Imbalu circumcision

The circumcision ceremony starts before 10 am and it is led by a group of young men singing and whistling and carrying the boys to be initiated on their shoulders.

They pass through a crowd of friends and family members with faces decorated with ash and almost half-naked with a small cloth below their chest. The initiation ceremony is done publicaly.

Basani is a name given to the men who have been initiated into full men while boys from other tribes who are not circumcised are referred to as Basinde.

The woman’s identity in Bugisu is measured by marrying a circumcised man.

Most males who try to dodge the imbalu circumcision ceremony sometimes face a rough circumcision whereby the male is circumcised forcefully without mercy.

Should you be traveling to the Pearl of Africa in one of the even years in August and December, visiting the Bamasaaba community should be included in your travel itinerary.