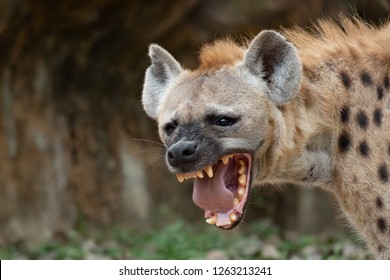 Hyenas are carnivorous animals and also the fifth-smallest biological family in the Carnivora, and one of the smallest in the class Mammalia. Despite their low diversity, hyenas are unique and vital components of most African eco-systems. Hyenas are also believed to have come from Asia They catch prey with their teeth rather than claws, their feet are large, blunt, non-retractable claws are adapted for running and making sharp turns. However, the hyenas have a grooming, scent marking, defecating habits, mating and parental behaviour. They are diversified into two distinct types: lightly built dog-like hyenas and robust bone-crushing hyenas.

Hyenas are commonly viewed as frightening and worthy of contempt. In some cultures, hyenas are thought to influence people’s spirits, rob graves, and steal livestock and children. Other cultures associate them with witchcraft, using their body parts in African traditional medicine.

The four extant species of hyenas are; Aardwolf, Spotted, Striped and Brown. The aardwolf is found in the shrublands of Eastern and Southern Africa and they are the only survivor of the dog-like hyena lineage. Its success is partly attributed to its insectivorous diet, for which it faced no competition. The striped hyena is common in North and East Africa, the Middle East, the Caucasus, Central Asia and the Indian subcontinent. The spotted hyena diverged from the striped and brown hyena and developed social behaviours in response to increased pressure from rivals on carcasses, thus forcing them to operate in teams. Spotted hyenas evolved sharp carnaisials behind their crushing premolars, therefore they did not need to wait for their prey to die, as is the case for brown and striped hyenas, and thus became pack hunters as well as scavengers. They began forming increasingly larger territories, necessitated by the fact that their prey was often migratory, and long chases in a small territory would have caused them to encroach into another clan’s turf. The brown hyena, also called strandwolf, is a species of hyena found in Namibia, Botswana, Southern Mozambique, South Africa, west and southern Zimbabwe.

Hyenas groom themselves often like felids and viverids, and their way of licking their genitals is very cat-like (sitting on the lower back, legs spread with one leg pointing vertically upward). However, unlike others they do not “wash” their faces. They defecate in the same manner as other Carnivora, though they never raise their legs as urination serves no territorial function for them. Instead, hyenas mark their territories using their anal glands. When attacked by lions or dogs, striped and brown hyenas will hide but the spotted hyena will defend itself ferociously. The spotted hyena is very vocal, producing a number of different sounds consisting of whoops, grunts, groans, lows, giggles, yells, growls, laughs and whines. The striped hyena is comparatively silent, its vocalisations being limited to a chattering laugh and howling.

Mating between hyenas involves a number of short copulations with brief intervals, unlike canids, who generally engage a single drawn out copulation. Spotted hyena cubs are born almost fully developed, with their eyes open and erupting incisors and canines, though lacking adult markings .In contrast, striped hyena cubs are born with adult markings, closed eyes and small ears. Hyenas do not regurgitate food for their young and male spotted hyenas play no part in raising their cubs, though male striped hyenas do so.

The striped hyena is primarily a scavenger, though it will occasionally attack and kill any defenceless animal it can overcome, and will supplement its diet with fruits. The spotted hyena, though it also scavenges occasionally, is an active pack hunter of medium to large sized ungulates which it catches by wearing them.

Hyenas are quite smarter than chimpanzees, normally the size of an animal’s frontal cortex is believed to be connected to its social intelligence, and hyenas have a frontal cortex on par with primates. A study done by Duke University showed that a captive pair of hyenas performed better at problem-solving and social cooperation than chimpanzees. Even more amazing is that during the study, the hyenas solved all the problems in silence, using only non-verbal signals for communication.

In Uganda, the most common type of hyena is the spotted hyena which is normally found in woodlands, savannah and desert, though being nocturnal, they are rarely observed. Hyenas are also known to eat people, though it is more likely that they will kill livestock, which results in them being targeted by hunters. It is also famous for its laugh, the common sites to find the spotted hyenas in Uganda are Lake Mburo National Park, Queen Elizabeth National Park, Murchison Falls National Park and Kidepo Valley National Park.

The spotted hyena’s famous “laugh” is actually a sound made to alert other group members to a source of food. This noise can be heard up to three miles away and is one of many sounds made by this sociable species to communicate with each other.

Hyenas are skilled hunters as well as scavengers, and their large, powerful jaws allow them to chomp through every part of their prey, including the skin and bones. The only parts which cannot be digested are hair, horns, and hooves – the hyena will regurgitate these in pellets.

Hyenas are found in many habitats, including woodland, savannah, and desert, though being nocturnal, they are rarely observed. Human-wildlife conflict has long been a problem. Hyenas are known to have eaten people, though it is more likely that they will kill livestock, which results in them being targeted by hunters.