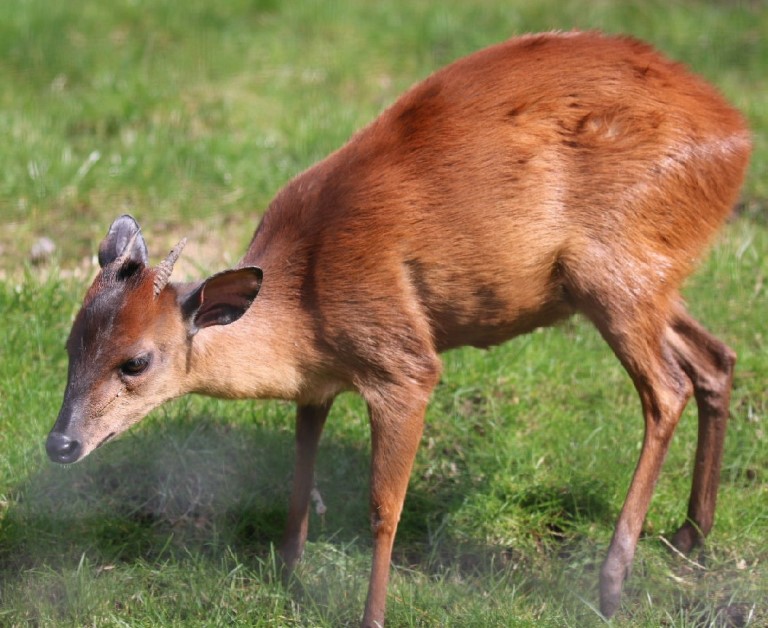 The striking yellow-backed duiker (Cephalophus sylviculter) is also atypical of the family, owing to its relatively large size — heavier than a bushbuck — rather than any habitat preference.

The coat of yellow-backed duikers is black or brown in color with a yellow triangular patch near the tail. This yellow patch typically will not appear until about 1 month of age and will not be completely developed until about 10 months. Males and females resemble each other in appearance, although females are slightly larger. The muzzle area is a light gray color which surrounds their white lips. Both sexes have short, conical horns that grow between 8.5 and 21 centimeters long.

Young yellow-backed duikers are born a dark brown color with spotted flanks and red undersides. These cryptic colors help them remain hidden from predators in the forest.

Yellow-backed duikers have unique scent glands located posterior to each eye. Unlike other antelope species, these glands secrete from a grouping of pores, not from a solitary large opening. These scent glands are used to mark territorial boundaries. Yellow-backed duikers are built for life in dense vegetation. The body is arched, with short forelegs and longer hindlegs for manuverability.

It is a west African species, but has been recorded in several forests in western Uganda, including those in Bwindi Impenetrable Forest, Mgahinga, Rwenzori and Queen Elizabeth national parks; it’s sometimes encountered fleetingly along the forest track leading uphill from the Buhoma headquarters at Bwindi.

Of the more typical duiker species, Harvey’s red duiker (C. harveyi) is a tiny chestnut-brown antelope found in forested parts of Queen Elizabeth National Park and in the Kibale Forest.

The blue duiker (C. monticola), even smaller and with a grey-blue coat, is known to occur in Queen Elizabeth, Murchison Falls, Kibale and Bwindi national parks.

Peter’s duiker (C. callipygus) has been recorded in Bwindi, Kibale and Queen Elizabeth; the black-fronted duiker (C. nigrifions) in Mgahinga and Bwindi; and there have been unconfirmed sightings of the white-bellied duiker (C. leucogaster) for Bwindi and Semliki.

The red-flanked duiker (C. rufilatus) and Weyn’s duiker (C. weynsi) have not been recorder in any national park, but they most probably occur in the Budongo Forest.