Tanzania a unique tourist destination in the world, endowed with a vast and spectacular range of tourist attractions. It is a land of many wonders hubbing an un-paralleled diversity of fauna and flora. Kilimanjaro, the highest permanently snow-capped free standing […]

Tanzania a unique tourist destination in the world, endowed with a vast and spectacular range of tourist attractions. It is a land of many wonders hubbing an un-paralleled diversity of fauna and flora.

Kilimanjaro, the highest permanently snow-capped free standing mountain in Africa, the exotic Islands of Zanzibar, the finest game sanctuaries of Serengeti, Tarangire, Lake Manyara, Ngorongoro Crater, Ruaha, Selous and the Marine Park of Mafia Island are only a few of the living examples.

Tanzania has 15 national parks, 29 game reserves, 40 controlled conservation areas and marine parks that are located throughout the country.

Group of wild giraffes in african savannah against blue sky with clouds near the road. Tanzania. National park Serengeti.

Some Tourist Attractions
Kilimanjaro: As the highest mountain in Africa and the highest free standing mountain in the world, Kilimanjaro has proved to be a magnet to climbers, naturalists, travelers and explorers over the centuries.

Only three degrees from the equator, the mountain has been known in African legends from ancient times.

The local Chagga people believed it to be the dwelling of an angry god who punished anyone who dared to climb it. They called the two peaks, kipoo and Kimawenzi which are now known as Kibo and Mawenzi. 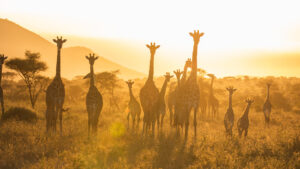 Ngorongoro Crater: As the largest unbroken caldera in the world, it has been described as one of the greatest natural wonders of the world.

The crater accounts for just a tenth of the Ngorongoro Conservation Area.

The crater is home to many species of wild game and birds. With the exception of impala and topi (due to fierce competition with the wildebeest) and the giraffe (because there is not much to eat at tree level), almost every species of African plains mammal lives in the crater, including the endangered black rhino, and the densest population of predators in Africa.

A strange thing is that the crater elephants are mainly bulls. The birdlife, which includes the flamingo, is mainly seasonal, and is also affected by the ratio of soda to fresh water in Lake Magadi on the crater floor.

It is contiguous with the much smaller Masai Mara Game Reservein Kenya and stretches as far as Lake Victoria to the West. Its name comes from the Maasai word Siringet, meaning ‘endless plains’.

The park’s vegetation ranges from the short and long grass plains in the south, to the acacia savannah in the centre and wooded grasslands concentrated around the tributaries of the Grumenti and the Mara rivers in the park.

The western corridor is a region of wooded highland and extensive plains reaching the edge of Lake Victoria. In the early morning and evening light, the Serengeti landscape is stunningly beautiful. 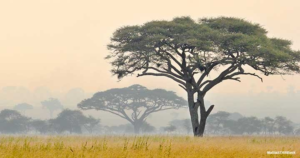 The Serengeti ecosystem supports the greatest remaining concentration of plains game in Africa, including more than three million large mammals. It is the sanctuary of an estimated four million different animals and birds.

The animals roam the park freely and in the spectacular migrations, huge herds of wild animals move to other areas of the park in search of greener grazing grounds (requiring over 4,000 tons of grass each day) and water.

The annual migration into Kenya (in a continuous search of water and pasture) of more than 1.5 million wildebeest and hundreds of thousands of zebra and gazelle is triggered by the rains and usually starts in May, at the end of the wet season. Called the Great Migration, this constitutes the most breathtaking event in the animal kingdom ever known to humans.

As the dry season intensifies, the herds drift out towards the west, one group to the north (to Lake Victoria, where there is permanent water), the other northeast heading for the permanent waters of the northern rivers and the Mara.

The immigration instinct is so strong that animals die in the rivers as they dive from the banks into the raging waters to be dispatched by crocodiles.

The survivors concentrate in Kenya’s Maasai Mara National Reserve until the grazing there is exhausted, when they turn south along the eastern and final stage of the migration route.