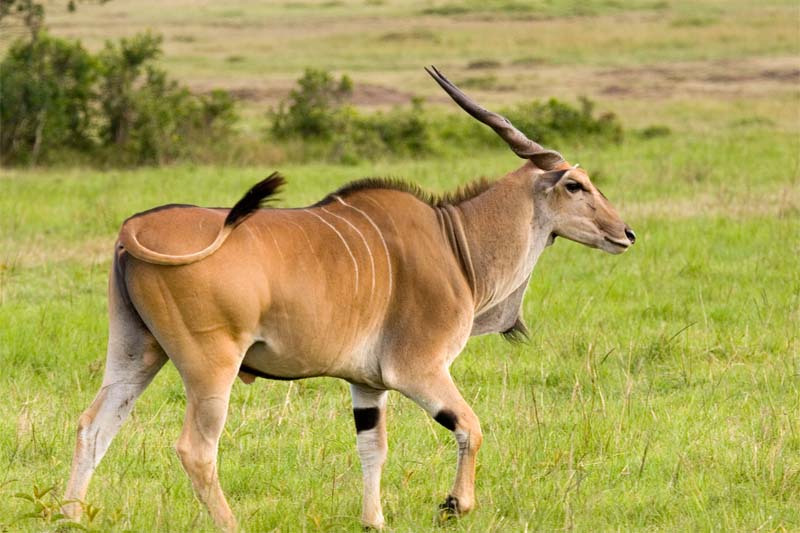 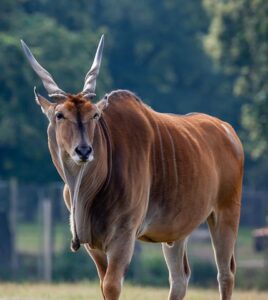 The common eland, (Taurotragus oryx) also known as the southern eland or eland antelope (a species of the family Bovidae and genus Taurotragus), is one of the world’s largest savannah and plains antelope found in East and Southern Africa. The world’s largest antelope is the common or Cape eland which measures over 1.8m in height, and can be bulkier than a buffalo.

The eland has a rather bovine appearance: fawn-brown in colour, with a large dewlap and short, spiralled horns, and in some cases light white stripes on its sides.

The common eland occurs in open habitats throughout eastern and southern Africa. In Uganda, it is most likely to be seen in Lake Mburo National Park, but also occurs in Kidepo Valley and Pian Upe Wildlife Reserve. 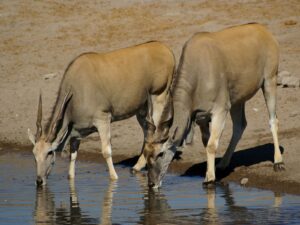 Eland males are much larger than females, weighing 400-1000 kg compared to 300-600 kg for females. Hides are a uniform fawn color with some vertical white striping on the upper parts.

A dewlap, thought to be an adaptation for heat dissipation, hangs from the throat and neck. Heavy horns are twisted in a corkscrew fashion and grow up to 4 ft. long on males, 2.2 ft. long on females. A short mane occurs on the nape, and males have long hairs on the throat.

Herds usually number up to 25 individuals, although larger temporary aggregations of females and calves occur during the wet season.

There may be more than one adult male in a herd, but there is a strict dominance hierarchy that controls access to breeding females. Home ranges of females, which make extensive movements during the wet season, are much than those of males.

Male territories occur primarily in wooded areas. Fighting between males is done with horns, males feel out each others’ horns, and then push with all their might.

The Eland is a browser, utilizing a wide diversity of plant species consisting of grasses, herbs, tree leaves, bushes, and succulent fruits.

They generally forage in open areas. They can exist for long periods without open water, but is then reliant on the fruits of Tsamas and Gemsbok Cucumbers to meet its water requirements.

Dominant males mate with multiple females. Gestation lasts from 8.5-9 months and only one calf is born.

Small calves lie in concealment rather than remaining with their mothers. Weaning occurs after 6 months, and sexual maturity occurs at about 3 years. Maximum lifespan is 25 years. 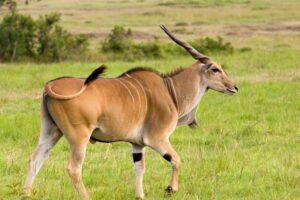