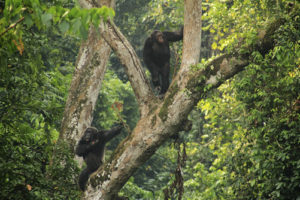 Kyambura gorge is an underground tropical forest found in Queen Elizabeth National Park. The Gorge is 100 meters deep and about 1 km long. It is an extension of the Kyambura Game reserve which is part of Queen Elizabeth National Park. Kyambura gorge is characterized by dense tropical rain forest that are home to a large number of birds, primates and mammals like elephants and hippopotamus.

The Gorge is surrounding by vast summer grasslands on all sides although human plantations and villages are not very far off.  The surrounding Savannah receives a lot of sunshine while the gorge itself is remains relatively cool because of the tall trees less direct sunlight.

The river Kyambura is a key water source and flows right in the middle of the forest providing water to the plants and animals throughout the year. River Kyambura gets most of its water from the rocks surrounding the gorge and during the rainy season.

Kyambura Gorge connects to the Kazinga Channel of Queen Elizabeth National Park through a vast swamp/wetland. A local legend has it that there were once heavy rains in the area that caused massive floods carrying away some people and their properties.

After the rains ceased and floods subsided, the people went out to look for missing loved one and property but with no success.  Everyone came back lamenting and using the word “Kyambura” which means “got lost” or “I couldn’t find it”.  Because of the massive loss of property and disappearance of people, the place and gorge became known as Kyambura.

How was the Kyambura Gorge formed? Scientists have come up with theories to explain the formation of this wonderful natural feature. One group believes that the gorge was formed by continuous erosion as a result of the force coming from the River Kyambura.

According to this group of thought, the river down the gorge was once massive and flowed at great speed and force which left a valley after the waters reduced. A more acceptable theory attributes the formation of the gorge to the time when the East African Rift valley was formed.

The East African Rift Valley was formed when compression forces caused tension on the earth’s crust that lifted some parts of the earth and created a vast valley in-between. Later on, there was secondary faulting on the very floor of the East African Rift Valley. It is this secondary faulting that created others valleys among which include the Kyambura Gorge.

Kyambura gorge is often referred to as the “Valley of Apes” due to the small community of chimpanzees and other smaller primates trapped in the forest therein. The chimp population in Kyambura Gorge is habituated and hence the only place where tourists can track the primates in Queen Elizabeth National Park.

Chimpanzee tracking is arguably the most attractive thing to do in Kyambura Gorge – and why not? Chimpanzees are man’s closest relatives and are highly intelligent compared to most primates. They can walk on two legs like us and though for short distances because they prefer using all four limbs.

Chimps live in communities of between 30 to 80 members. Large groups are divided into smaller groups that feed separately before getting back to the group before night.  They build nests on top of trees for rest in the afternoon and at night.

Building the nests takes a very short time and is done by bending several tree branches together to form a comfortable chimp couch.  The most active part of the day for chimps is after getting out of their temporary nests in the morning. They start by picking up fruit randomly in the morning becoming very selective as they get fuller in the afternoon. Because of their high level of intelligence, Chimps will use stems to fight of enemies including humans.

The same stems can be used to remove/lure termites out of their holes. Although chimps feed in mainly fruits, they will kill small antelopes and other primates for food. The hunt is organized in a group in which the unfortunate victim is chased, corned and eaten.

For thousands of years, the chimps in Kyambura Gorge would cross over to feed and mate other chimp communities in forests like Katsyoha- Kitoma, Maramagambo and Kalinzu through a natural and smaller forest corridor.

This forest corridor was completely destroyed by humans through deforestation and setting up new settlements. The chimps became trapped in the gorge.

The only path to the other forests is through the Savannah which is full predators like lions, leopards and hyenas.  The chimps had no alternative but to remain in the gorge and forge a life for themselves. Scientist fear that inbreeding could lead to mutations and slow birth rates.

The Volcanoes Safaris along with the Uganda Wildlife Authority have attempted to remedy the situation by planting over 6000 trees along the former forest corridor to link the chimps to Katsyoha- Kitoma forest.

This new forest corridor will allow the chimps in the gorge to cross and meet other clans hence widening the gene pool.

Chimpanzee trekking in Kyambura Gorge has two sessions (Morning and afternoon). The first sessions start early in the morning with a briefing at the visitors Center close to the Gorge.

To track chimpanzees in Kyambura Gorge, one needs to first acquire permits from the Uganda Wildlife Authority.

The permits are got from the park offices in Mweya. The Authority issues only 8 permits for each session hence a total of 16 permits per day. From Mweya visitors need to drive to the gorge for briefing. After the briefing, visitors are assigned a walking stick and Guides to lead them down the gorge. The first task is to go down the 200 meter slope up to the river down the valley.

Chimps are very vocal and their location can be identified by following their hoots and distant cries. In case they are quiet, their footprints (in mud) and poop can help in locating them. Once you locate them, you will be able to watch them play, breastfeed, mate, rest and even fight.

The chimps in Kyambura Gorge have a remarkable habit of getting down the trees each time they see visitors. This allows for great photos from a close distance.  Apart from the chimpanzees, hiking down the gorge exposes visitors to unique and amazing biodiversity.

Visitors will have an opportunity to spot rare vegetation and tall tropical trees. The gorge is also home to mammals like hippos, elephants (occasionally) and other smaller primates. The whole activity takes between 2 to 3 hours. You can also look at our 3 Days Chimpanzee Trekking Safari in Kibale National Park for comparison.

What you should know about Chimpanzee trekking in Kyambura gorge

The distance to the Gorge from Kampala through Mbarara town is about 420 kilometers. If using the Kampala Fort Portal route, the distance is 410 Kilometers. Driving to Queen Elizabeth National Park by road generally takes about 6 hours. To avoid the long distance by road, tourists can book a chartered flight from Entebbe international airport to the airstrip in Mweya.

The flight takes about an hour. From the airstrip, a private car can be arranged to pick you up by your tour company or hotel up to the visitors Centre in Mweya. After paying for the tickets in Mweya, you will then be transferred to Kyambura Gorge. Kyambura Gorge is located 30 kilometers away from the Mweya Visitors centre. The Kyambura Gorge has its own small Visitors Center at Fig Tree camp just at the edge of the Gorge.

Primates and other wildlife viewing: Apart from chimpanzees, Kyambura Gorge is home to baboons, Vervet Monkeys, red-tailed monkeys and Colobus monkeys. You can start seeing the primates and birds feeding down the valley from the edge of the gorge or while still on the Savannah.

This view from the surrounding Savannah is a wonderful experience. In fact, instead of sloping down the gorge, visitors can simply walk around the edges of the gorge to marvel at the scenery below. If you decide to go down the valley, expect to encounter many forest creatures including hippos, antelopes and elephants.  Lions, hyenas, buffaloes, leopards and other mammals visit the gorge occasionally too.

Nature and Forest Walks: Kyambura gorge is an amazing place to explore. Many tourists concentrate on the Savannah and the wildlife while visiting Queen Elizabeth National Park. Little do they know that they are missing natures great wonder at work.

Apart from its natural beauty, you get this feeling that you are in another world – Somewhere mysterious and intriguing. Guided nature walks can be done alongside chimpanzee tracking or separately on foot to see some of the forest creatures like large forest hogs, Colobus monkeys, re-tailed monkeys and hippos. Nature walks in Kyambura Wildlife Reserve will introduce you to a completely different world.

From the hot Savannah surrounding the gorge, you are suddenly introduced to cool underground forest with beautiful tree canopies and amazing creatures. Your Guide will share information about the valley including its history, the animals and birds.

Bird watching: Kyambura Gorge is a birders paradise. The gorge is attractive to the birds because of the tall trees and scenery. The trees are filled with fruits and insects which the birds love.

Many of the birds are forest dwellers but there are also countless birds that go to the gorge purposely to feed and then retreat to their nests in the Savannah or wetlands close to Lake Albert and George.

There several accommodation facilities close to Kyambura gorge offering simple to high end facilities. Visitors can also reside at lodges close to the Queen Elizabeth National Park offices and go early in the morning for activities at the gorge.

For those who desire to book with a true luxury lodge that is close to the Gorge, Kyambura Gorge Safari Lodge is arguably the best option.

Kyambura Gorge Lodge is owned by Volcanoes safaris and was opened in 2009. The lodge is arguably the closes luxury hotel Kyambura Gorge. All the 8 cottages are built with local material and spread out in the African bush to ensure that guests have the required privacy.

The rooms are equipped with free Wi-Fi, a balcony, high end showers, flush toilets, mosquito nets and a working desk among many other luxury facilities. The hotel has a lounge area, a fireplace and a restaurant that serves both local and international meals.

The hotel has built raised platforms were visitors can go and spot the gorge, Savannah, the Rwenzori Mountains from afar. After searching for the chimps for over 2 hours, you can come back and use the large swimming pool while enjoying beautiful views of the African wilderness. Kyambura Game Lodge has a private garden where local vegetables and fruits are grown and served to guests at meal time.

The nights at Kyambura Game Lodge are unusually quiet enabling guests to hear animal and insect sounds. Because the lodge has few rooms, staff take care of clients very with great attention to detail. Evening entertainment is arranged involving traditional dances and other performances by one of the local tribes.

Apart from building this lodge, Volcanoes Safaris has won praise for its eco-tourism projects and work with the Uganda Wildlife Authority to ensure that they recreate the forest corridor that the chimps can use to go to neighboring forests.

The forest bridge will help eliminate inbreeding because it will open doors for the primates to mate with others in neighboring forests.

Apart from creating a forest corridor for the chimps, the Eco-tourism projects have helped reclaim wetlands that had been encroached upon by neighboring communities.

The lodge started the Kyambura Community Café to train youth in hospitality management, a coffee cooperative for the local women and a community playground where children can play all kinds of games.

The hotel arranges to take visitors to some of the project sites to see the reclaimed wetlands and the new forest corridor for the chimps. Visitors are even given an opportunity to plant new seedlings in the garden.