Bush Babies in Uganda – With a Sound of Human Baby Crying 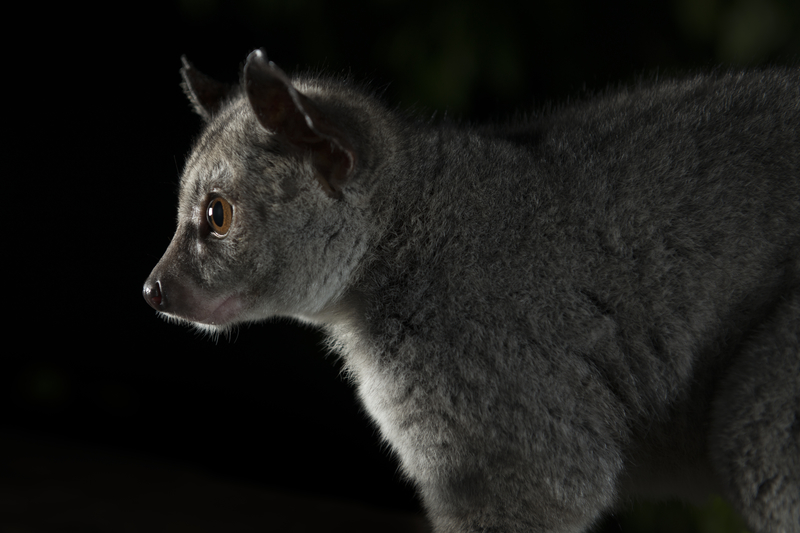 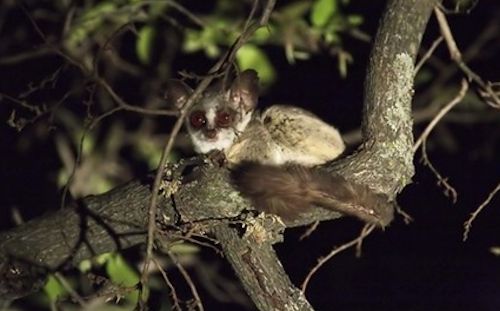 Bush-babies Interesting-facts Uganda-primate-safari, Bush babies are among the smallest primates almost as small as a squirrel, they are African nocturnal primates that live in trees and they are usually seen during the night game drive in the different national parks in Uganda during our exciting Uganda Primate Safaris.

They have an odd as it combines looks of several animals like a bat, a cat and somehow a dog. To clearly identify a bush baby, you have to look out for particular features on its body. There are two types which include the tick tailed bush babies and the lesser bush babies.

They have got really big and round eyes giving them a very clear vision which they need to use in the night when they come out to hunt for food. In addition to the big eyes are the upright shaped ears just like those of a bat and these enable bush babies track and down prey like insects in darkness as all they have to do is listen carefully. With both these senses highly functioning, they move swiftly and accurately that is how they are able to catch insects from the ground although sometimes they have to just snatch them from space as they fly. 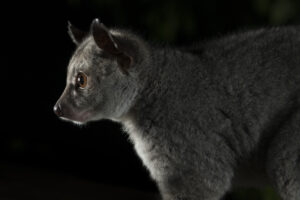 They have the ability to jump from one branch to another and during the jumping, hey ten to fold their ears against the heads to protect them especially when they are jumping through thorny bushes or thickets. They also fold them up when they go to sleep.

While preparing to land, they have to tuck their arms and legs attached to the body as that act gives them the force to move forward and then grab a tree branch with the front and hind limbs. They have the ability to cover a distance of about 10 yards in just seconds with just a few leaps. They sometimes move like the kangaroo therefore they hop, sometimes the just walk and run on their four legs like other animals.

Where you can find Bush babies

Bush babies have the same habitats as monkeys except that while monkeys come out during day time, you can only get to see the bush babies in the night as they are nocturnal animals therefore they never face ecological competition with monkeys.

Bush babies are commonly seen in woodland areas, they like bush lands of the sub Sahara of Africa too that is why you will be able to find them anywhere across the East African block.  They don’t like places with high altitudes especially that that goes beyond 6,500 feet high. In Uganda, you will find them in Kibale national park and in the impenetrable Bwindi forests, and there are those dwarf bush babies that have been seen in Lake Mburo national park and also, many of them found a home in Queen Elizabeth national parks.

They prefer staying in tree hollows as shelter but, they at times construct their own nests using forks of branches although those are not used as often common as the natural holes. Bush babies always stay in trees that are surrounded by very little grass probably its their precaution against wild fires should it break out.

Their diet often changes depending on the season but they basically feed on stuff like small insects, fresh leaves, fruit, they have acacia gum more during the cold days.

Their behavior and how they live

They normally live in small groups of just the mother and her little ones. They move around looking for what to eat privately although sometimes they love having physical contact which is why they at time come in contact with other bush baby groups during the day and have a nap.

They have that baby like cry, they also make croaking, they chatter and also make a clucking sounds or whistles when they sense danger. They often use a process called urine washing to mark the routes that they use as they hunt for food. This means they urinate all along the path and later when they are returning to the nests, they follow that scent. Alternatively, they will urinate on themselves and make a trail of damp sticky and smelly foot and hand print as they jump from branch to branch. Males also use their urine to mark their territories and they become very aggressive when a member form another group intrudes. 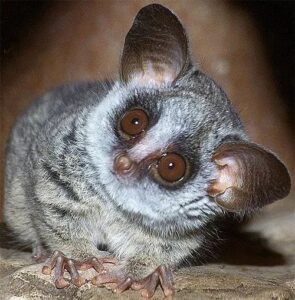 Growth, maturity and reproduction as well as life span

Bush babies don’t really have a mating period however after mating, the females get a gestation period of 4 months and towards or after giving birth, the mother bush baby might become aggressive especially if they sense any harm towards them or their little one, this could be because the maternal instincts are kicking in. At every birth, mothers give birth to just off springs although, just like in humans, there are times when twins and triplets are born and each newborn weighs not more than half an ounce and a mature bush babies can weigh 5-10 ounce which 0.28kg at most. Within the first three days or a week after giving birth, the mother will watch her offspring closely to keep them from predators and infections. She carries them up with the mouth or the hands after a few days and then they cling on as she walks.  Off springs suckle for about 6 weeks and at 2 months, they feeding themselves on the same food as their mothers. They grow up really fast and real soon they reach maturity and give birth life their mothers.

They have a life span of about 14 years and if they don’t die of an illness or killed off by a predator, they can live to their full life span.

Because bush babies spend their day in hiding, this helps them avoid a large number of predators that move around during day time like eagles, the lions and many more. And because they know they can easily be captured while on ground, the alternative is to stay up in the trees and rely on the ability to jump from one branch to another.

Their main predators in this case include the large owls, African wild cats, the servals, the snakes, genets, among others.

For more on primates found in Uganda