Basoga People and their Culture 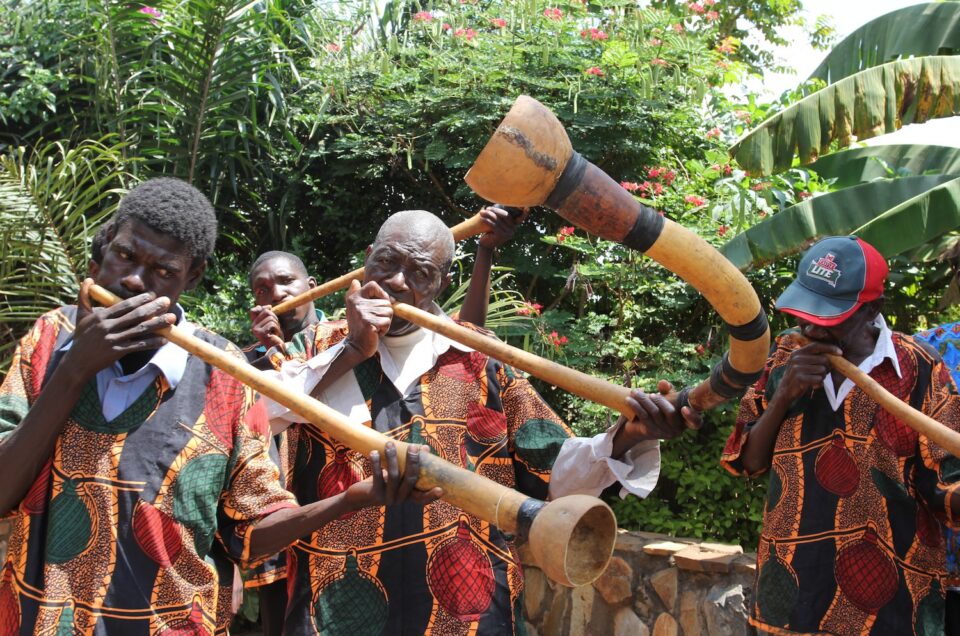 Busoga is a cultural institution that promotes popular participation ‎and unity among the people of Busoga, through cultural and developmental programs ‎for the improved livelihood of the people of Busoga. It strives for a united people of ‎Busoga, who enjoy economic, social and cultural prosperity. It also continues to ‎enhance, revamp and pave the way for an efficient institutional and management ‎system for the Kyabazinga kingship.

Busoga, literally translated to Land of the Soga, is the kingdom of the 11 ‎‎principalities of the Basoga/Soga (singular Musoga) people. The term Busoga also loosely ‎refers to the area that is generally indigenous to the Basoga.

Busoga Kingdom is composed of seven ‎politically organized districts: Kamuli, Iganga, Busgirl, ‎‎Mayuge, Jinja, and the newly created districts of Kaliro and Busiki. The Busoga area is bounded on the ‎north by the swampy Lake Kyoga, on the west ‎by the Victoria Nile, on the south by Lake Victoria, and on the east by the ‎‎Mpologoma River, Busoga also includes some islands in ‎‎Lake Victoria, such as Buvuma Island.‎

The King
Busoga is ruled by the His Royal Highness Isebantu Kyabazinga of Busoga. This name was a symbol ‎of unity derived from the expression and recognition by the Basoga that their ‎leader was the “father of all people who brings all of them together”, and who also ‎serves as their cultural leader.
History of Busoga Kingdom
‎Written history begins for Busoga in the year 1862. On 28 July 1862, John Hanning Speke, an explorer for the Royal Geographical Society, arrived at Ripon Falls, near the site of the modern town of Jinja, where the Victoria Nile spills out of Lake Victoria and begins its descent to Egypt.

Since Speke’s ‎route inland from the East African coast had taken him around the southern end of ‎the lake Victoria, he approached Busoga from the west through Buganda. Having ‎reached his goal – the source of the Nile, he turned northward and followed the ‎river downstream without further exploring Busoga.

He records, however, being told ‎that “Usoga” (the Swahili form of the name “Busoga”) was an “island”, ‎which indicates that the term meant to surrounding peoples essentially what it means today. The present day Busoga Kingdom was, and still is, bounded on the north ‎by the swampy Lake Kyoga, on the west by the Victoria Nile, on the south by Lake Victoria, and on the east by the Mpologoma River.

‎‎In the 19th century, one of the principal routes along which Europeans travelled from ‎the coast to Buganda passed through the southern part of Busoga. From John Speke and James Grant, Sir Gerald Portal, F.D Lugard, J.R. Macdonald, and Bishop Tucket all noted that Busoga was plentifully supplied ‎with food and was densely settled as a result. However, between 1898–99 and 1900-‎‎01, the first indications of sleeping sickness were reported.‎

In 1906, orders were issued to evacuate the region. Despite the attempts to clear the ‎area, the epidemic continued in force until 1910. As a result, most of the densely ‎populated parts of Busoga, the home land of over 200,000 persons in the 19th ‎Century, was totally cleared of the population in the ten years. Lubas palace at ‎Bukaleba, also the coveted European fruit mission, collapsed and relocated to ‎other parts of Busoga.

Southern Busoga constituted of about one third of the land ‎area of Busoga, and, in 1910, southern Busoga was vacant. In the 1920s and 1930s, ‎some of the evacuees who survived the epidemic began to return to their original ‎land. However, in 1940 a new outbreak of sleeping sickness resurfaced in the ‎area, and it was only in 1956 that resettlement, promoted by the government began ‎again, but things were not going to be the same again. Few Basoga returned to ‎their traditional lands.‎
Political status
‎‎About the turn of the 16th century, an important event took place, which was to give ‎the Basoga their peculiar cultural configuration. This was the advent of the ‎‎Baisengobi clan, who bear their historical ‎descendancy from Bunyoro.

Prince Mukama Namutukula from the royal ‎family (Babiito) of Bunyoro is said to have left Bunyoro around the 16th century and as part of Bunyoro’s expansionist policy and trekked eastwards across ‎‎Lake Kyoga with his wife Nawudo, a handful of servants, arms and a dog, and ‎landed at Iyingo, located at the northern point of Busoga in the present day ‎‎Kamuli District.‎

‎Prince Mukama loved hunting and his adventures exposed him to the beauties of ‎the new found land. For some time he engaged himself in blacksmithing, making ‎hoes, iron utensils and spears. Prince Mukama and wife Nawudo bore several ‎children of whom only five boys survived.

On his departure back to Bunyoro, ‎‎Prince Mukama allocated them areas within his influence as overseers. The five sons of Prince ‎Mukama regarded themselves as the legitimate rulers over their respective areas by ‎virtue of their family origin (Babiito).

They continued to preside over their ‎respective dominions; employing governing methods and cultural rituals like those ‎from Bunyoro-Kitara. This state of affairs in Busoga’s political and cultural ‎arrangement continued till the late 19th century when the colonialists persuaded ‎the rulers of Busoga into some form of federation. This federation resulted into a ‎regional Busoga council called Busoga Lukiiko.‎

Before 1906, although it was often called a ‘Kingdom’, it was debatable whether ‎Busoga could really be classified as such. Unlike its western neighbor, Buganda, ‎Busoga did not have a central ‘all-powerful’ figurehead (King or Queen) until 1906, at the behest of the British colonial powers.

Prior to this, ‎the Basoga were organized in semi-autonomous chiefdoms, partly under the ‎influence of Bunyoro initially, and then later on, under the partial influence of Buganda.‎

‎‎Before the coming of the British to Uganda, there was no uniting leadership in ‎Busoga. When Uganda became a British protectorate, attempts were made to ‎create a central form of administration on the model of Buganda which was a fully ‎fledged kingdom.

The Buganda King – the Kabaka had lineage going ‎back centuries. However, in Busoga some of the chiefs had been simply appointed ‎by the Kabaka – and it is believed that in some cases they were descendants of ‎favored Baganda chiefs who were given authority to rule over land in Busoga. ‎Others simply belonged to powerful landowning families in Busoga that had become ‎self-appointed rulers over vast areas. The British brought all these chiefs into an ‎administrative structure called the Lukiiko.

The British appointed a Muganda ‎from Buganda, Semei Kakungulu as the ‎President of the Lukiiko and he became Busoga’s first leader, although the British ‎refused to give him the title of ‘King’, as they did not regard him as a real king.‎

However wrangles amongst the different chiefs and clans continued, and most Basoga ‎still retained affiliation to their chief, clan or dialect. It was also not helpful ‎that the ‘King’ was from Buganda. The Lukiiko structure ‎collapsed. The structure had however given the Basoga a taste of what influence they ‎could muster in the protectorate if they had a King. It would elevate them to the ‎level of Bunyoro and Buganda.‎

Meanwhile, the white colonial rulers were grooming Chief Yosia Nadiope, the ‎‎Gabula of Bugabula to become the first permanent resident ruler of the formed ‎‎Busoga federation. Nadiope had been one of the first Basoga students to ‎study at Kings College Budo in 1906.

However, catastrophe struck Busoga in ‎‎1913, when Nadiope died of malaria. The following year 1914, Chief ‎‎Ezekeriel Tenywa Wako, the Zibondo of Bulamogi was completing his ‎studies at Kings College Budo. With the support of the British ‎coupled with his background as a Prince, Zibondo of Bulamogi, with his ‎good educational background, was a suitable candidate for the top post.

In 1919, the ‎hereditary saza chiefs of Busoga resolved in the Lukiiko to elect Ezekerial Tenywa Wako as president of Busoga. Chief Gideon Obodha of Kigulu, a ‎contending candidate for the post was not familiar with the British system, while ‎‎William Wilberforce Nadiope Kadhumbula of Bugabula was still an infant.

His ‎regent Mwami Mutekanga was a ‘mukoopi’ (a commoner) who couldn’t run for the ‎post. Eventually, in 1918-9, the title of Isebantu Kyabazinga was created and one ‎of the chiefs, Wako took the throne. He was given a salary of 550 pounds, and permitted to collect taxes in Butembe county in lieu of ‎the lost role in his traditional chiefdom of Bulamogi.

By the time ‎‎Owekitibwa E.T. Wako retired as the Isebantu Kyabazinga wa Busoga, the ‎‎Busoga Lukiiko had expanded to include people other than the Hereditary Rulers. These members of the Busoga Lukiiko were elected representatives – two ‎from each of the then 55 Sub-counties in Busoga.‎

When Owekitibwa E.T.Wako retired, it was necessary to replace him. The ‎Busoga Lukiiko resolved then that the Isebantu Kyabazinga wa Busoga shall ‎always be elected among the five lineages of Baise Ngobi (Ababiito) hereditary ‎rulers – traditionally believed to have been the five sons of Omukama of Bunyoro ‎who immigrated to Busoga from Bunyoro.

In 1957, the title Inhebantu was introduced as a description of the wife of the ‎‎Isebantu. This epitomised the gradual unification of Busoga and the evolution of ‎‎Obwa Kyabazinga bwa Busoga.‎

When monarchies were abolished in 1966, the Kyabazinga was dethroned. ‎When Idi Amin expelled the Asians from Uganda in 1972, Jinja ‎suffered both socially and economically.

The government of Yoweri Museveni has ‎tried to encourage Ugandan Asians to return. This has helped but has not revitalized Jinja to its former glory. However the Asian influence remains, particularly in ‎the architecture and street names.‎