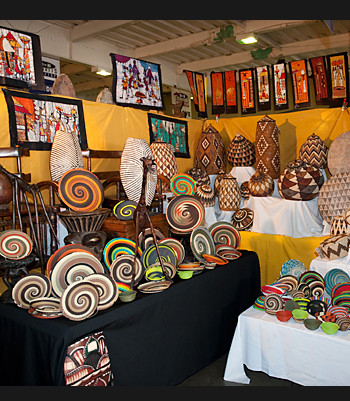 Art and Crafts Uganda. Crafts have been developed through the traditions of the people. Art and craft are a result of the feelings of the people responding to a variety of historical events and influences and the environment in a most spontaneous manner. Art is the creation of works of beauty through the application of skill resulting from knowledge and regular practice. Craft on the other hand is taken as an occupation, especially one in which skills or techniques in the use of the hands are needed.

Craftsmanship in Uganda is a practice that has been passed down from generation to generation. It includes crafts like basketry, pottery, wood-curving and the like.

Ugandan craft works are so varied that one needs to pay attention to various ethnic setting in order to exhaust it. One has also to make distinctions and give similarities that occur within the crafts of different ethnic groups. The differences that appear in crafts are consequences of the cultural practices of each ethnic group.

Further still, ethnologists hold that since multi-headed spears are almost always connected with ceremonial or magico-religious practices, so are the multi-mouthed pots were used to give poisoned beer to the victim who had incurred the wrath of Kabaka. The Luo and some Bantu groups – the Basamia and Bagwe use a double mouthed pot in certain religious rites, especially those connected with the birth of twins.

Although there are differences which are prominent, especially as regards their functions and designs, there are qualities that bind crafts together. In this respect, one should look ant the very methods by which different craft-works are made by different nationalities. For example, the large field and storage baskets used in Teso are made using wicker work with heavy materials. Wicker work baskets are also common among the Basoga, Banyoro, Bahuutu and Acholi.

The local potter in the village builds his pots of whatever description and function from the base upwards t the rim. The potter uses the coiling method. Thus the method of pottery making is the same for the Alur, the Batooro, the Basoga, and the Lango. Generally, pottery is the work of the specialized craftsman.

Among some ethnic groups like the Langi, Bakiga, and the Bahuutu, however, the men make pots for their households. In most tribes the potter is an insignificant member of the community, while among the Baganda the royal potters who worked for the Kabaka had a special title, special privileges like exemption for the lumuo tax and wore special aprons as their insignia. Among the Bavuma the industry entails considerable co-operation between a number of people of both sexes; women make pots while men act as middlemen and salesmen.

In the case of Baganda, Banyoro, and Basoga the potters are men and there are strong taboos against women approaching the clay pits. For Bavuma, Bagishu, Acholi and Madi, the potters are women. Then in other tribes both men and women do pottery. These include the Bakiga, Bahuutu, and Bairu. While the process of pot building is very similar in every tribe, there are still variations in the time taken drying and the method of firing.

Basketry is one of the most highly developed crafts in Uganda. It is at the foundation of home making. Basketry is essential in building houses, stockades, fences or enclosures, pens, traps for wild animals, baskets and mats. Recently, redesigning has been emphasized to produce modern items like hand bags, table mats, flat trays, ornament baskets and mats wit different patterns. Most of these come from Buganda, Toro, Kigezi and Bunyoro.

Barkcloth-making and related crafts are also common mostly in Bantu regions. The natalansis tree (omutuba). The process involves the use of a specially made heavy, grooved mallet (ensaamu). As the craftsman hits the bark with the mallet, the fibrous bark becomes thinner and larger.

Traditionally, the barkcloth was purposely made to be used as burial shrouds, bedding and clothing; and carpeting the floor of the kings’ palaces, especially in Buganda, Toro and Bunyoro the backcloth was replaced by cotton and other clothing materials, new items like table mats, shoulder bags, hand bags, briefcases, purses, cushion covers and others have been made form barkcloth.

In most cultures, the making of metallic tools and other utilities by blacksmiths was also a common practice. Blacksmiths made cutting tools, the majority of which were the spears and arrows.

Wood-curving is also another sector which has thrived traditionally and still thrives today in Uganda. However, it has been very much influenced by external forces, especially in terms of design.

The commonest domestic woodcraft products include; stools, beds, mortars and pestles, bowls, ladles, trays, wooden canoes and others. Some carvings are also done as decorations taking the form of masks, omweso boards, walking sticks and others.

Traditional craft items in Uganda cultures include amulets, necklaces or beads, arm and leg ornaments, bracelets, rings, and headdresses. For example, the Karimojong headdress is made form human hair felted together with grease and clay. It is strengthened by a wire framework round the front edge. It is patterned with red, blue and yellow paint. The metal eyelets across the crown and at the back are used t hold ostrich features and other ornaments.

Witchcraft also exists in all nationalities. Objects vary according t the powers possessed by the user. Some may include decorated leopard skins, cow tails, and animal horns, skins of snakes, features of rare birds, shell and beads.

In modern times, there are clashes between cultures. In Buganda for example, there are immigrants form all parts of Uganda and beyond. There is thus a country-wide tendency of cultures influencing one another as regards crafts and art. This however, could, lead to a strong political, social and economic integration in the sense that ethnocentrism could die at a fat rate.

There has been a profusion of new materials and techniques. Plastic and aluminum products, for instance, have caused the dwindling of utilitarian local crafts like pottery. More and more people in Uganda are using plastic ware like Jerry cans, mugs and bowls. Most Ugandan crafts have therefore become ornamental.

This has brought Ugandan craftsmen together with one common need: to sell their work. In the past when the markets were local, when life moved at a slow and even tempo and there were no buyers form overseas, there was no need to redesign the traditional craft for modern use. While the production of craft works by local craftsmen for sale is fairly recent, is fast growing and has great potential. The main ideas behind it have been to preserve and encourage indigenous methods, to create jobs for local people, especially women, and to exploit the huge market

There fore many tourists undertaking Uganda tours have greater admiration for most of Uganda handicrafts.