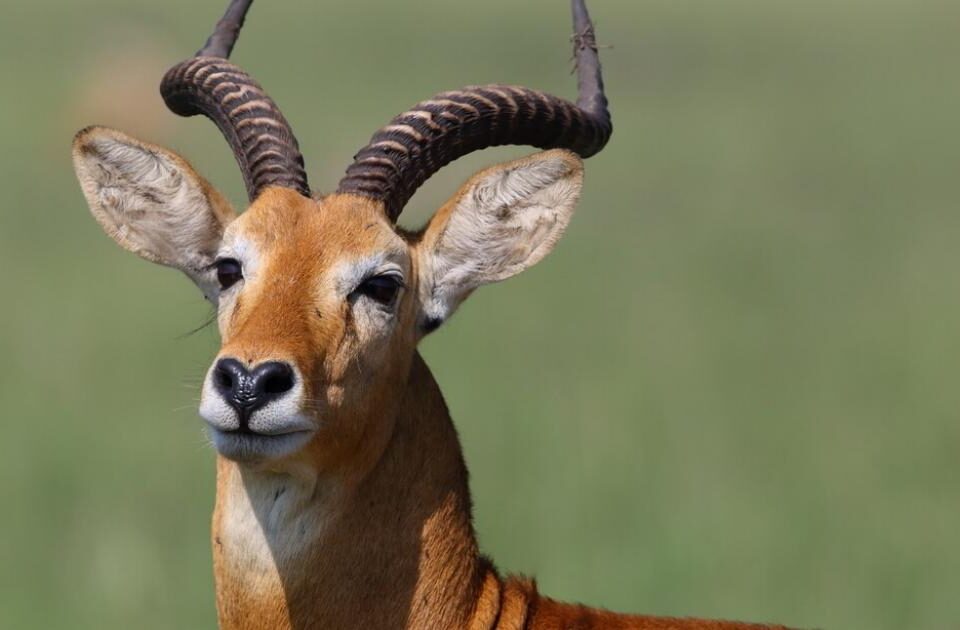 Uganda’s open grasslands and wooded bush lands support the most splendid biodiversity of small, medium, and large antelope in Africa.

All antelope are ruminants. They have four stomachs for fodder in varying stages of digestion, and like domestic cattle, they reprocess already-swallowed fodder by chewing the cud.

About 29 antelope species, about one-third of the African total, have been recorded in Uganda. Of the species that occur in Uganda, five into the category of large antelope having a shoulder height of above 120 centimeters (roughly the height of a zebra).

Antelope live in almost all African habitats. Anywhere that humans have not extensively broken the soil, wild herbivores flourish. Wildebeest and their alcelaphine relatives favor open and wooded grassland, as there is more cover from predators.

Gazelle has adapted to a wide range of habitats, from arid to semi-arid—and in the case of springbok and some Grant’s subspecies, they have adapted to watered grassland preferred by the Thomson’s gazelle. Roan and sable inhabit grasslands with good bush and tree cover and frequent well-watered grasslands and wooded valleys. In contrast, oryx prefer an arid habitat and can live in total desert conditions. Interestingly, as is the case with the steenbok, oryx (or gemsbok known in Southern Africa) is also water-independent.
All species of reduncinae antelope prefer wetlands or tall, tussocked, marshy grasslands. Even hillside-living reedbuck are associated with wet grasslands and hill marshes.

In general, alcelaphine lives at low densities in arid to sub-humid areas, favoring regions of thick cover such as shady, broken forest, and bushland. It’s also true of the greater kudu and nyala. Two notable exceptions are eland, which frequently opens grasslands and often roam as high as 14,850 feet—the long-hoofed sitatunga, which lives in swamps and marshy lakesides throughout eastern Africa. Small antelope live in a wide range of habitats, from forests to thickets, to kopjes, rock outcrops, and open grasslands.

Some male antelope (including gazelles such as springbok) and alcelaphine (including wildebeest and tsessebe) are territorial during the breeding season. Males set up their territories and try to prevent females from leaving, despite a tendency to move on when the grass supply is diminishing.

Springbok and impala are rarely seen alone, except for the occasional territorial male forlornly standing his ground after the breeding season. Most herds are of less than 100 animals. Interestingly, the antelope breeding season is synchronized with the onset of the rains.

In fact, the impala is so adept at predicting the rains that they will hold off delivering their young for over two weeks after birth is due, should the rains be late. It’s a remarkable feat, considering that impala has an exact gestation period of six months. During the “bush babies” safari season (usually early December), one may see young of all the antelope species once the rains have arrived.

Both steenbok and duiker pair for life and remain territorial. Territory sizes may vary from 165 to 1,650 feet in diameter, depending on the season and local conditions. Such relatively small territories allow the animals to know precisely the location and season for food plants, the best escape routes, and the most effective hiding places. They reach sexual maturity in less than a year. Gestation lasts about six months. Therefore, two births a year are possible with a relatively constant food supply. Before it is 2 years old, the young animal will leave its parents’ territory.

Waterbuck, puku, lechwe, and various reedbuck species live in small, loose associations of adult females and young, moving through a world of male-dominated territories. Groups are rarely larger than 10 to 15 animals. Lechwe exhibits a variation on the territorial theme. They establish a “lek,” or territorial breeding ground, where a group of dominant males display and mate with females. Gestation lasts about nine months before a single calf is dropped.

In the subfamily alcelaphine, the onset of female sexual maturity begins at 18 months old. Males continue to grow beyond sexual maturity so that the difference between the sexes becomes gradually more striking. A single calf is born after a gestation of about six months. Calves are weaned at 3 to 4 months old.

An eland group is usually made up of a few females and young, with a loosely territorial adult male in attendance. This male is the one that will eventually mate with the group’s females. Females reach sexual maturity at age 3. During conception peaks, small groups will aggregate into hundreds of elands, which can be considered somewhat migratory, as they move over great distances.

(roan, sable, and oryx) have a system of matriarchal hierarchy, resulting in small herds of five to 20 animals, with varying degrees of male participation. In sable, female herds range over adjacent male territories. In roan, a single male accompanies the females; in oryx, male groups satellite females for most of the year, but only the dominant male will mate.