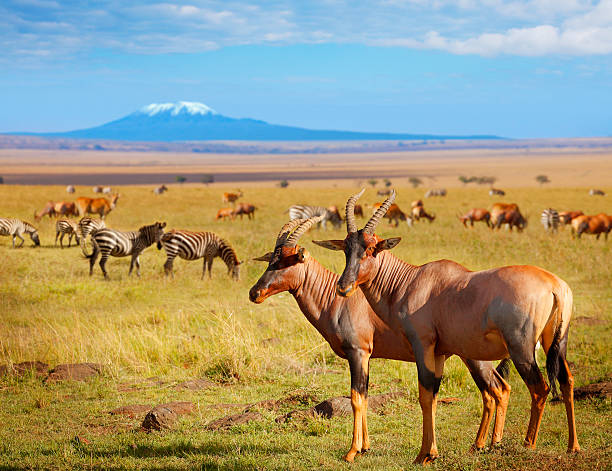 Amboseli National Park is the Second most popular national park in Kenya after Maasai Mara,260km(160miles) from Nairobi City to the park. Amboseli lies north-west of Mount Kilimanjaro, on the border with Tanzania Southern Kenya, eastern Africa.

It is one of Kenya’s most popular parks crowned by Mount Kilimanjaro, Africa’s highest peak. It is among the largest surviving National parks in Kenya and East Africa situated in southern part of Kenya in Kajiado district, 62km Bus drive from Nairobi to Kajiado at about $17-$28

which takes 6hours and 2min,and approximately 39miles by Air(Bird fly)which is the shortest distance and fastest means costing about $90-$160 and takes 2hours and 25min The park is seated on a 39,206 hectares of land(392km, 151sq mi) at the core of an 8,000km (3,100 sq. mil) ecosystem that spreads through the Kenya-Tanzania boarder. 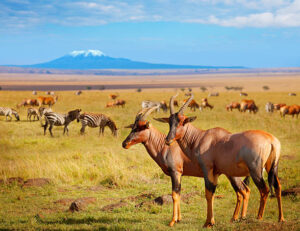 Amboseli national park was originally a game reserve with its name Maasai Amboseli game reserve in 1906 for the Maasai. But in order to protect its core and unique ecosystem, it was later on gazetted and established as a national park in 1974 and it was declared as Amboseli National park by president Jomo Kenyatta by decree to protect the flora and fauna and by the year 1991, it was declared a UNESCO site as this increased on the number of tourists flowing in Kenya from around the world and by the year 2005 the park had earned over $3.5m. 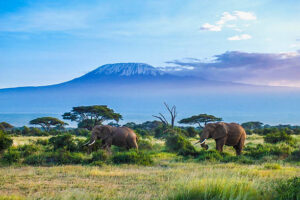 Amboseli is known for its large herd of over 900 free-ranging Elephants according to the Kenya information guide. The elephant population in Amboseli includes 58 families and close to 300 independent adult males.

It is considered as the best place for viewing and filming Elephants and it is reported that Amboseli was a home of “Echo” the most researched elephant in the world, the subject of many books like Elephant memories, Echo of the elephants and Portraits in the wild all by Cynthia Moss an American researcher as well as documentaries which followed for almost four decades.

Echo died of natural causes at the age of 65 in May of 2009, leaving the family she had cared for and guided for so long to face the worst drought ever recorded in Amboseli on their own. It was a final test of the years of Echo’s leadership.

Echo is recorded as an elephant to remember. Besides having a large herd of free ranging elephants, Amboseli Bird-wise holds over 600 species including the two types of Falcon and a variety of kingfisher.

The name Amboseli comes from a Maasai word “Empusel” meaning Salty, dust. The ancestral inhabitants of the area are the Maasai people. The largest percentage of tribes residing in this region is the Maasai tribe since the local people are mainly Maasai.

However, there are other tribes of people staying in the land from Kenya and the neighboring regions since the park is on the boarder of Kenya and Tanzania.

It is one of the best places in Africa to view large herds of Elephants. Its recorded as the “home to the Big Five”. Referring to the large African animal species which are known to be deadly and dangerous.

The Big Five include the Lions, Leopards, Rhinos, Elephants and the African Buffalo. The term “Big Five” was used by the big-game hunters when referring to the most difficult animals to hunt on foot in Africa.

The nearest city to Amboseli National Park is Nairobi city. The park is managed and governed by the following governing bodies, Kenya Wildlife Service, the Maasai community and Olkejuado county council. 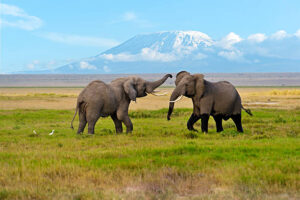 Amboseli National Park will offer you a breath taking experience and a sense of an African touch that encompasses the Masai tribe found in the land near the park area, their culture, clothing, food name it and a wild experience of the different wildlife species and birdlife as you plan to visit Kenya and this will make your experience fun filled and good to remember.