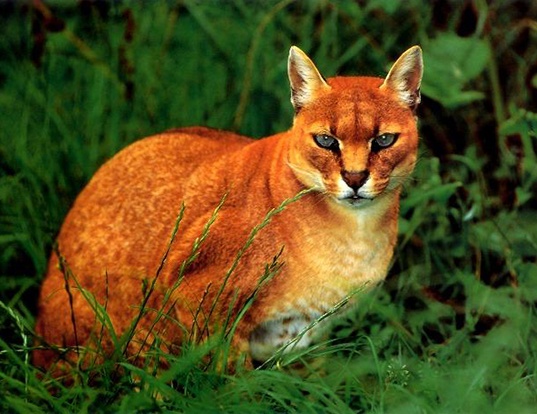 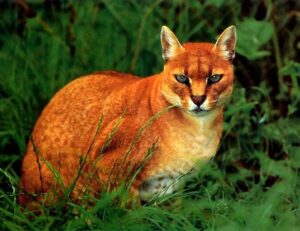 The African golden cat is a solitary, nocturnal inhabitant of tropical forests. It is 90–100 cm (36–40 inches) long, including the 20–25-cm tail, and stands about 40 cm at the shoulder. The coat is either solid reddish brown or grayish brown above, and white with dark spots below.

The African Golden Cat Caracal aurata is one of the least-known felids in the world. About twice the size of a domestic cat, they are medium sized but sturdy, powerful animals, with stout, relatively short legs and large paws. There are two colour forms: golden/reddish brown and silvery/dark slate-grey. Both red and grey phases occur in the same areas, but few melanistic specimens have been recorded.

The underparts are whitish, and the belly and inner sides of the limbs can have variable amounts of dark spotting. There are four different coat patterns found throughout the Golden cat’s range: spotted all over; spots on the back and neck indistinct; no pattern except on flanks; and no pattern except on belly and inner legs. Spotting is more extensive in western populations. Their head is relatively small with a fairly large muzzle, irises of green to golden brown. Small white patches are visible around the eyes, mouth and along the cheeks. The backs of the small, rounded ears are black. The tail is less than half of the head body length, and has a dark line on the upper side, a dark tip and is often banded with darker rings.

African Golden cats are the only forest-dependent wild cat in Africa, and their least known felid. They are endemic to tropical Africa and found in two widely disjunct populations in west central Africa and along the west coast to the north. No records of these cats exist for Benin or Nigeria, leaving a large gap between existing populations.

These cats live in moist equatorial rainforest of all kinds. They can be found from sea level up to 3,600 metres in deciduous rain forest, montane forest, bamboo forests, alpine moorland, wooded savannah and riverine forests that extend into the drier, more open areas. Their density is highest in pristine, undisturbed forest. Golden Cats can adapt well to logged areas where thick understory vegetation and higher rodent densities occur.

This cat is predominantly terrestrial as almost all confirmed sightings were of animals on the ground. Golden Cats hunt using a stalk-and-rush technique. Rodents are generally the most frequent prey species but small mammals, birds and primates are also eaten. In areas where the Leopard Panthera pardus has been extirpated, the diet of the Golden Cat consists of slightly larger prey, mostly small ungulates with rodents, birds and eggs, monkeys and bushpigs also being taken.

Once thought to be crepuscular and nocturnal, a recent camera trap study in Gabon (2011) found African Golden Cats to be active at all times of day and night. Peaks in Golden Cat activity corresponded weakly with periods of reduced Leopard  activity, with increased activity during the hottest part of the afternoon when Leopards are least active.

Like other wild cats living in dense undergrowth, African Golden Cats prefer to move along roads and well-used tracks. Camera trap rates in Gabon were much higher along abandoned roads. In pristine areas without human trails the cats were found to favour large trails left by forest elephants.

No dens with kittens have been described from the wild. The only information on reproduction comes from one captive pair that bred four times.  A litter of two kittens were born after about 75 days, weighing 180 – 235 grams at birth. They grew fairly rapidly with their eyes opening in two to three days, and were weaned between three and four months, at which time they weighed 2.5 – 3 kg. They reached sexual maturity between 11-18 months of age. 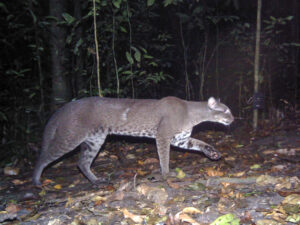 The African Golden Cat is very vulnerable to extinction and has lost about 44% of their former range. Their geographic range is limited to tropical Africa and they have already been extirpated from large parts of their habitat. As forest dependent animals their population is lower in areas with increased human disturbance. The forests of west Africa have been heavily damaged by human activity, including construction of roads. New roads make it easier for the growing bush-meat trade to go even further into the forest resulting in local depletion of the cats prey species.

Golden Cats are also extremely vulnerable to snaring, which is the most commonly used bush meat hunting method in forests of Africa. If not killed outright, the cats are often maimed and unable to survive for long.

In Cameroon, Uganda and the Republic of Congo, Golden Cat skins are sold alongside medicinal herbs and fetishes. They are reportedly used for circumcision rites, for wrapping valuable objects and as good luck charms when hunting.

African Golden Cats share much of their range with the larger Leopard. Research studies on this big cat have found that when their larger prey species are less abundant, they switch to smaller prey, thus directly competing with the Golden Cat for food resources. A study of the Leopard in Gabon also found African Golden cat remains in 5 of 196 Leopard scats. Conversely, the eradication of the Leopard from Bwindi  National Park in Uganda has led to the African Golden Cat being the dominant carnivore in that area.

While hunting of this species is prohibited or regulated by national laws in about half the range countries, enforcement of the laws is lacking.